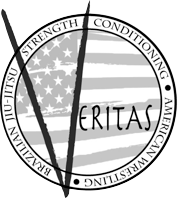 I started training Brazilian Jiu-jitsu in March of 2014.  This is the story of how I won my first BJJ fight at the Smokey Mountain Grappling Tournament in Alcoa, Tennessee on May 23, 2015.  I only had a few weeks to prepare for the competition and a week before the tournament, I decided to lose 10 pounds and fight in a lower weight division.  Click here to read about my weight loss experience, which was a victory in itself.

I weighed in at 194.6 pounds at 9:45 AM and began the process of hydrating and getting some energy in my body while I watched my team mates from Veritas BJJ of Dalton, GA compete.  I love these guys and gals.  They train very hard at jiu-jitsu and inspire me to do my best.  If you're in the Dalton area, I highly recommend you give them a try.

Here's some pictures of my team mates during the competition.  Here's Coach Jason Finnell coaching Caitlin Kelley "Cupcake" during her competition.  The next picture is the moment she won her division with a shoulder lock.  She won first place.  (Photos by Vince Caggiano.) 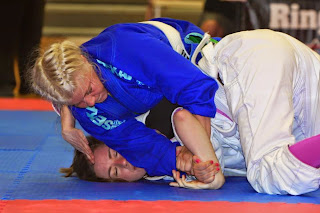 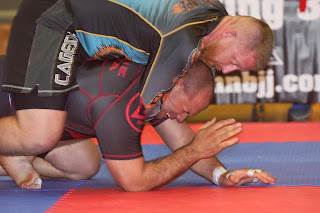 I have competed before in Tang Soo Do competitions and I always have jittery nerves before it's my turn.  It's the same way when I preach on Sundays.  Even though I've been doing it for almost 15 years, I still get a little nervous before the service starts.  I just try to control my breathing, relax, and stretch.  It's almost time.

Coach Jason pulled me aside to encourage me.  "Chris, I expect you to blow through your competition today.  Your good and you've been training hard.  You shouldn't have any problems.  Regardless of what happens,  I'm proud of you.  Just remember to relax, breath, and stay calm.  Don't rush things.  Take your time and wear you opponent down before you try any submissions.  Establish your dominant position and then hold it until your opponent stops fighting."

They call my name.  I'm the first one named from my division to fight.  I walk onto the mat to take my place in the ring.  I close my eyes and say a short prayer to center myself.  "Father, help me to do my best and keep me and my opponent from being injured.  Please be glorified by what we do here.  Amen."

My opponent stands across from me.  He doesn't look so mean.  He's a little smaller than me with salt and pepper hair and beard.  I'm glad I lost those 12 pounds so I could fight in this division.  We shake hands.  The referee signals for us to start.  My game plan is not to rush.  I'm going to take my time.  I will let my opponent try to take me down to the ground, but I will counter him.  I'm quick and have great reflexes and I'm usually successful at this.  We have just started to clench and fight for grips on each other's gis (uniforms) when the ref stops us and tells us to hold our position.  He explains the clock has malfunctioned.  I joke with my opponent that we already broke the clock.  The kidding blows off a little more steam and helps me relax.  In a moment, the ref tells us we can let go of each other and take a break while they fix the clock.

I step over to my coach, Jason, and listen to him remind me to stay calm and not rush.  "Make sure you don't concede your grips to him."  "Ok, coach.  Is it alright if I go ahead and try and take him down?"  "Sure.  Remember, snap him toward you.  Then when he pulls a way, push in.  You can just go back and forth like that until you get him off balance..."  Coach sits back down and I just pace slowly around to stay calm and loose.

The ref calls us back together and decides to restart us from neutral.  Only 20 seconds has run off the clock at this point.  We touch hands again.  "Go!"  Almost immediately, my opponent tries to take me to the ground.  It is sloppy and he hasn't done anything to break my balance or posture.  As I expected, I can easily counter him and follow him down almost immediately into side control.  This is one of the most dominant positions for me.  My body is on top of his and I'm perpendicular to him while he is flat on his back.  All my weight is pressing down on him.  He's burning way more energy than me just to breath and there's very little he can do, while I have a multitude of options to try and submit my opponent.

I remember coach Jason's advice earlier that morning, "Chris, don't rush. When you get on top, relax and take your time.  Hold the position and let your opponent wear out.  When he starts to settle down, then go for the submissions."  That's what I'm gonna do.  I press my shoulder into his face and drive all my weight down while trying to counter any movements he tries to free himself.

I hear coach call out from the corner, "Relax Chris!"  I relax my muscles and slow my breathing.  I don't want to burn myself out.  I'll leave that for my opponent.  He's tiring and slowing down.  I feel his frustration, because I've been in that position before.  He starts to settle down and I see him looking towards his corner for advice from his coach.  Time to make my move.

I will attack his left arm and try a shoulder lock.  He's fighting hard because he knows what I'm trying.  He's slipping his knee up under me, trying to hook my leg and pull me into half guard (still a dominant position for me, but an improvement for him).  I fight it off and press my weight back into him.  I go for the shoulder lock again, but he's defending well and trying to regain half guard.  I'm fighting it off, but now he's framing up (this means he is using his forearm and elbow to press into my chest and face to keep me from putting pressure on him).  He's fighting valiantly and creating space between us so he can maneuver.   Now I'm having trouble isolate his arm for a shoulder lock.  He finally slips his leg in and pulls me back into a half guard and I don't fight it off this time.  It's time to go for something I've been working on and has been working for me a lot--an Ezekiel Choke.

I settle into half guard on top of him as I slip my left arm around the back of his neck.  He is feeling relieved at having finally removed the pressure of my side control.  I'm hoping to capitalize on his false sense of security in this situation.  Secretly, I grab my right sleeve cuff with my left hand.  Then I slip my right hand in front of my opponent's throat.  Now I scissor my arms and apply pressure to his throat, but I'm not in good position and he rolls over while I'm trying to choke him and I end up on my back with him on top and I have him in guard.  The choke isn't placed right so I let go.

Now I'm on my back with him on top.  I have him in my guard with both my legs around his waste, so he can't apply pressure.  This is actually a more dominant position for me, though the lay person wouldn't know it.  I have a multitude of ways to attack him from here while he has very little.  However, I don't like fighting from this position.  I still have a lot to learn. My coach knows my fighting style and calls out, "You've gotta sweep him, Chris!"

I get my grips on my opponents lapel and attempt a scissor sweep to flip him over on his back to put me on top of him, but he counters and he doesn't go all the way over.  I hear my coach yell, "Back up to your feet, Chris!"

I scramble back up to my feet and we are standing again, gripping each other’s gis.  Almost immediately, he tries to pull me down into his guard.  Again, his technique is sloppy and he doesn't break my balance or control my posture.  I easily counter him as we go down and I pass his guard--this time to the opposite side.  I'm glad I've been practicing side control from both the left and right side.  As I press my shoulder down into his face, I think "See buddy.  I can do this either left or right handed."

I go for the shoulder lock again (Note to self, I really need more submissions in my tool bag.  I know what to work on.)  I get his arm isolated, but he's fighting hard again.  My coach is giving instructions on how to complete the submission, but the opposing coach is giving instructions on how to counter it.  After a few minutes of struggling, my opponent slips his leg in and drags me into half guard again.

Ok.  I'm going to try the Ezekiel again. I know it works.  I trust my training.  I press into half guard, slide my arm around the back of his neck, grasp my right sleeve cuff.  Coach Jason is giving instructions on how to get out of half guard.  Good.  That'll serve as more misdirection. The opponent's coach is warning him to guard his throat.  I know he can't really from this position.  I slip my right hand across his throat.  Coach Jason yells out, "Use the blade of your hand!"  I keep my hand open, sag my left arm, and scissor with all my might.  We start to roll to my right, but this time my opponent can't roll all the way.  I'm in a better position and we end up side by side facing each other as my choke sinks in deep.  It feels solid.  I know it sucks because I've been choked this way in class before.  My opponent fights for a second or two and then taps out (to show he is giving up).   I don't let go until the ref calls for the stop.  Then, I release.  (The picture below is the moment my opponent taped from my Ezekiel choke.  Photo by Vince Caggiano.) 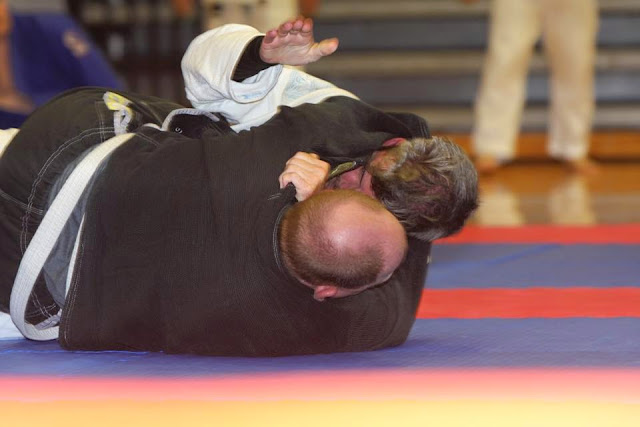 We break apart and the muscles in my arms arm burning and I'm breathing hard from exertion.   I think there were only about 30 seconds left in the fight.  We went for seven and a half minutes and we both feel it.

At this point, I'm thinking I need to catch my breath because I'll have to fight my next opponent in a few minutes.   The ref calls for the awards banner and I realize Shawn and I were the only two fighters in our division, so there won't be anymore fights.  I got off easy today, but I'm proud of my first fight.  I fought well and executed my fight plan perfectly.  I could have fought more people, but was glad to have my first competition behind me as a win.

Click here to learn more about Veritas Brazilian Jiu-Jitsu where I train.

Click here to learn how I lost 12 pounds in one week to prepare for my fight. 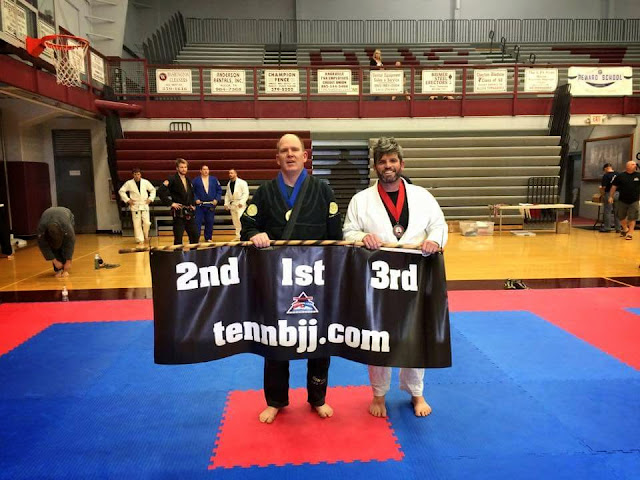