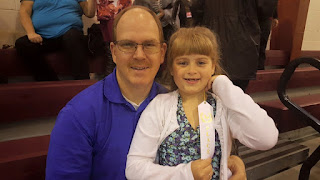 My 8-year-old daughter, Abigail, is a witty, intelligent, and budding young writer.  She loves to write stories and spends lots of time doing it(on her own initiative).  Yesterday, she was so excited to show me the "writing desk" she set up in her room exclaiming, "I'm a professional writer now!"  Over the Christmas/New Years break, Abigail decided to research and write about three important female figures in history.  Annie Oakley was Abigail's choice and she asked my wife for two more suggestions; my wife suggested Florence Nightingale and  Edith Wilson.  I share these as a proud father, but I think you will also enjoy these short and creative historical exposes from my little Abigail.


My favorite person in history is Annie Oakley. I decided to write a story about her. After you read this story maybe she’ll be your favorite person in history too.
It all started on August 13,1860 when Phoebe Ann Moses was born. You're probably thinking I thought we were talking about Annie Oakley.  And  we are but believe it or not Annie Oakley’s real name is Phoebe.  When  Annie was 5 her father died. Annie soon got a new father. One day after tons of begging Annie’s stepfather finally let her shoot his gun. With one shot she killed a turkey. That was the first time Annie had ever shot a gun and, she was only 7 years old! That’s basically how it all started.
When Annie was 15 she got a letter from her older sister inviting her to come to Cincinnati and visit. Annie went to a shooting show while she was there.  At the show she met a man named Frank Butler. Annie entered a shooting contest against Frank and she won. One year later Annie married Frank.
Annie and Frank had a stage act together where they did shooting tricks. That’s where Phoebe Ann Moses became known as Annie Oakley. You’re probably wondering how it exactly happened. Well, Annie needed a stage name, so she came up with the name Annie Oakley. Her and Frank joined Buffalo bill’s wild west show. They traveled to France, Germany, England, and other countries with their show.
Annie Oakley passed away at the age of 66, she died on November 3,1926. She lived a wonderful life and she is famous for her life. She was a woman who loved to shoot guns, was great at it and, she is famous because of her love of guns.
The
End

Edith
Wilson
On October 15,1872 Edith Wilson was born. Woodrow Wilson married Edith on December 18,1915. You may be wondering who Woodrow Wilson is, well he is the 28 president of the U.S.A. When Edith married Woodrow she became the first lady of the U.S.A.

On October,2 Edith found Woodrow unconscious after he had a stroke! The stroke left Woodrow’s left side paralyzed and made his vision blurry. Woodrow’s health got better but his illness were permanent. That left Edith to run the country!
Woodrow could barely do paperwork, Edith had to do basically everything Woodrow used to do! This was pretty important because back then women weren’t  allowed to have positions in the government.
In 1921 Woodrow finished his turn of being president. He had been president from 1915-1921. Woodrow Wilson died on February 3, 1924. Edith Wilson died on December 28, 1961. Edith Wilson is one of my favorite first ladies.

Florence
Nightingale
On May 12,1820 in Florence,Italy Florence Nightingale was born. When Florence was young she started to help the ill and the poor.

Florence knew she would be a nurse at the age of 16. When Florence told her parents she wanted to be a nurse they forbid her from it.They forbid her from it because Florence was expected to marry a rich man and it was below their standard. In 1851 Florence finally got permission to be a nurse.
In 1853 the crimean war started. Florence helped in the crimean war by helping the sick and injured soldiers. Back then there hospitals were disgusting. It was probably as gross as a gas station bathroom. Florence did not like the dirty hospitals. Florence started making all the hospitals cleaner.
At the age of 90 on August 13, 1910 Florence Nightingale died. Without Florence we probably would still have disgusting hospitals. Today we still have the symbol of a lamp for nursing because Florence was known as the lady wit the lamp. She is known for this because she would check on the soldiers in the night with a lamp. Florence Nightingale will always be remembered.
The
End