As Sheep Among Wolves, part 4 - Listening vs. Scoffing 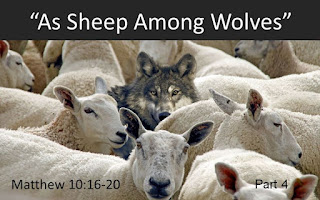 Introduction
On Sunday, we had a confirmation ceremony at my church.  Three young "confirmands" completed a six-week course on the basics of Christianity and then chose to publicly confirm their faith in Jesus Christ in front of our congregation on Palm Sunday.  I was so proud of these three young people between the ages of 11 and 12.  They were very attentive throughout the course--listening and learning.
Jesus said we should emulate the faith of a child (like my confirmands who were so attentive to learn and accept Jesus by faith).  Their attitudes are quite a contrast to the religious leaders when Jesus rode into Jerusalem the week before Passover.  You can read the full Palm Sunday story here in John 12:12-19.  Although crowds of children and ordinary people were amazed by Jesus' teachings and the miracles (even raising Lazarus from the dead after he'd been in a tomb for four days), the religious leaders scoffed.  They couldn't or wouldn't believe in Jesus.  Even though they espoused to worship and serve God, they dismissed God's Son as a fraud.
Jesus knew there would be many who scoff at our faith. It doesn't matter to them that we have experienced the life changing power of God or that our faith in Jesus has changed our lives forever for the better.  They will still scoff and dismiss us and our beliefs.  Many will even labor to destroy us because they feel threatened by how we live and what we teach.  Always remember what Jesus said in Matthew 10:16-20; we are sheep living among wolves.

Matthew 10:16-20
16 “Look, I am sending you out as sheep among wolves. So be as shrewd as snakes and harmless as doves. 17 But beware! For you will be handed over to the courts and will be flogged with whips in the synagogues. 18 You will stand trial before governors and kings because you are my followers. But this will be your opportunity to tell the rulers and other unbelievers about me.[a] 19 When you are arrested, don’t worry about how to respond or what to say. God will give you the right words at the right time. 20 For it is not you who will be speaking—it will be the Spirit of your Father speaking through you. 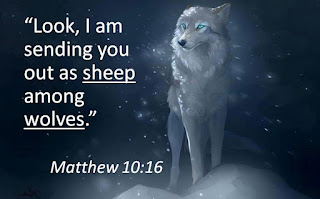 The Amazing Rise of Christianity and the Scoffers Who Dismiss It
Though the religious leaders of Jesus day tried to get rid of Jesus and then his followers, Christianity grew exponentially.  The persecutions, arrests, and murder of early Christians only caused believers to move to new cities where they persisted in teaching people about Jesus Christ and more and more people became followers.  The Christian faith would have died with it's leader Jesus if it was only of human origins.  Since, however, it was God's plan for His people, the Christian faith endured and today more people follow Jesus than any other religious leader.
There always have been and always will be those who feel threatened by true Christian faith and just want to explain it away.  Even today, when a passionate church or Christian movement grows rapidly, there are scoffers who try to blow it off saying, "There's nothing to it.  It's just a fad and it will fade away."  When John Wesley led a revival of the Church of England in the 1700s, people dismissed the early Methodist movement as a bunch of religious fanatics.  However, people's lives were truly changed.  Drunks put away their liquor, thieves became honest men, Christians gave to the poor, visited the sick and dying and those who were in prison.  The whole fabric of society in England and America was changed for the better as Christians took their faith in Jesus seriously and loved God and their neighbor with their whole hearts.  Yet even then, there were people who scoffed; and there are people who scoff at vital Christianity today too.

Pastor Chris’ Paraphrase of Proverbs 13:1 – A wise child accepts a parent’s discipline; a scoffer doesn’t even hear it. 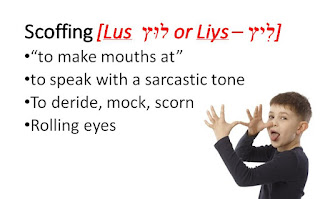 Scoffing - Lus לוּץ or Liys - לִיץ
No, I'm not talking about scoffing down your food!  The Hebrew word for scoffing (Lus or Liys) literally means “to make mouths at.”  Scoffing is to speak with a sarcastic tone, to deride, mock, or scorn.  Scoffing is like the stereotypical teenager rolling their eyes when their parents give a lecture because, you know, "my parents are dumb and know absolutely nothing."  When we scoff, we don't listen.  We've decided a person is not even worth listening to.  And so, we can't learn from them because we've already decided they have nothing worthwhile to offer. 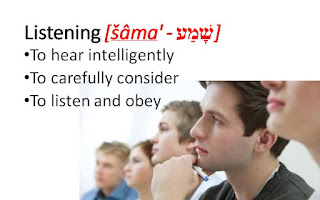 Listening - Šâma' - שָׁמַע
The opposite of scoffing in Hebrew is Sama.  It means to hear.  However, it's more than just detecting sound.  Sama means to hear intelligently, carefully consider, and to listen and obey.  The only way to learn is to listen, deeply contemplate what you've heard, and put it into practice.
If we are to be truly wise in this wolf infested world, we've got to stop scoffing and start listening.  So I want to give you some practical advise on how to avoid being a scoffer.  Listen to these principles.  Remember and put them into practice in your life. 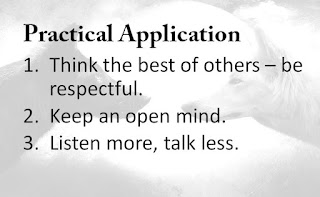 First, always try to think the best of others and be respectful.  When you mock someone, you dehumanize them.  When you look at someone on the other end of the political spectrum and say (or think in your heart), "They're just a bleeding heart 'libtard' who doesn't know anything!", you are no longer thinking of them as a person.  They aren't a child of God to you anymore; they're just a label, an enemy on the wrong side of a war.  You do the same if you say (or think), "They're just a backwards thinking conservative clinging to their guns and religion."  You are scoffing at someone's deeply held beliefs and writing them off as unworthy of your mental attention and respect.  And if we go down that road too far, it doesn't take long before we arrive at genocide and holocaust. Once you stop seeing people as worthy of love and respect, it's a lot easier to just see them as problems to be eliminated.
And here's the thing, mocking people will affect all your relationships negatively—even unintended ones.  When you mock your boss, your employees, your co-workers, or anyone you dislike or disagree with, it bleeds over into your relationships with people you really care about.  Soon you'll find you're being sarcastically disrespectful with your spouse, your children, and your friends.  You just can't seem to help it and you don't know why.  When a scornful spirit takes residence in your heart, it poisons everything that comes out even when you don't want it to.
So be humble and empathetic.  Try to understand how others feel and why they think the way they do.  You don't have to agree with them or condone their actions, but you do have to care about them and love them.  You have to respect others if you want others to respect you and take you seriously.  People don't care how much you know until they know how much you care.

Second, keep an open mind.  You can learn from anyone—even those you disagree with and those who are just plain wrong.  You don't have to agree with a person or point of view to learn it and understand it better.  And if you have learned an idea you disagree with, you have still learned something.  I have often found listening to someone I disagree with helps me better understand why I believe what I do.  Usually, I learn more from those I disagree with than those I do.
There is a way you can be right and still be wrong.  Does that seem like a contradiction?  It's true, you can be right and still be wrong.  How?  Well, how you disagree is as important as why you disagree.  If you disagree and do so by belittling, disrespecting, or scoffing, you actions are wrong even if your ideas are right.  God doesn't want us to be scoffers--even if we believe the right things.
One example of the right way to disagree is a time Rev. Billy Graham (a Christian evangelist) met with Woody Allen (a self-professed agnostic).  They had a delightful conversation about their opposing views on television several decades ago.  Graham disagreed quite frankly with Allen and clearly articulates his position and yet also does it with grace and love.  Graham makes it very clear that he loves and respects Woody Allen even though they disagree.  Allen obviously appreciates and respects Graham for his attitude.  You can watch the exchange on video here.

Third, listen more and talk less.  Remember God gave you two ears and only one mouth, so you ought to listen twice as much as you talk.  Pastor Chris’ Paraphrase of Proverbs 13:10 says, "People too proud to listen always get into drama, but those who listen to counsel wisely avoid it."  And Pastor Chris’ Paraphrase of Proverbs 18:13 says, "Speaking about something before fully listening is just stupid and brings humiliation."
You already know your point of view, but you only “think” you know someone else’s.  It’s not going to hurt you to set your own point of view aside for a few moments so you can really listen and understand someone else’s.  Just listening and truly understanding another's opinion (even if you deeply disagree) is an act of respect and grace that ought always to be part of the character of godly people.  And if it is, people are more likely to respect and listen to you.
Pastor Chris’ Paraphrase of Proverbs 15:5 says, "A fool rolls their eyes when their parent tries to teach them, but a smart person is careful to listen and learn."  Sometimes, when our heart is not right--when a sarcastic, mocking spirit is deeply imbedded in us (because of the topic or the relationship or our stage of life (teenager!!!  parents!!!))--it’s best for us to just keep silent.  If our heart's not right, no matter what we say, it’s gonna come out wrong.  Our tone will be wrong.  Our body language will betray a mocking spirit even if we aren’t aware of it.  So, just keep silent. Pray about it.  Ask God to help you give the Holy Spirit time to change your heart so your words (when you finally do speak) will flow from a pure heart and not a scoffing spirit.
Let's Change Our World by Letting God Change Our Hearts
Our world is full of mockers, scoffers, and sarcastic, scornful attitudes.  The last thing we need is for Christians to be the same way.  Perhaps, Jesus is calling you to repent of your scoffing, so you can listen and learn and become more Christ-like than you are today.  I know He's calling me.