Should I Speak Out or Be Silent? 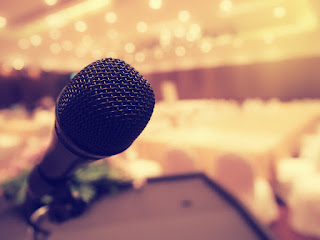 My morning scripture verse today was Proverbs 25:26, which I paraphrase as "Godly people who don’t speak up about the wrongs in their community are like a muddy spring or a polluted water system." I reflected on that wisdom during my morning walk.  Martin Luther King, Jr. said many decades ago, "There comes a time when silence is betrayal." And he also warned, "In the end, we will remember not the words of our enemies, but the silence of our friends."

Well today, in America, there is no shortage of people willing to speak up about one subject or another.  Social media gives us all a powerful platform from which to broadcast our opinions.  The public sphere is completely saturated with everyone's political beliefs, outrage, and musings on the latest and most critical issues we are given to argue about.  A person doesn't need credentials to prove they're qualified to speak into the public microphone.  So long as they speak passionately and creatively, there will be a multitude who accept whatever they say, repeat it, forward it, share it, tweet it, whether it is valid or not.

In the New Testament, everyone wanted to know Jesus' opinion on the important issues of his day.  His answers had a surprising way of rising far above the clamor of all the arguing sides.  One man wanted Jesus to tell a brother how to divide the family inheritance.  Jesus basically said, "That's none of my business."  (Luke 12:13)  People even asked Jesus to weigh in on important political issues.  Once they asked him about taxes in an attempt to trap him into saying something that would put him at odds with one side of the argument or another.  Jesus replied with the brilliant statement, "Render unto Caesar what is Caesar's, and render unto God what is God's." (Mark 12:17)  In one simple sentence, he avoided alienating either side of the debate and skillfully rendered both positions irrelevant in light of the greater perspective of God's Kingdom.

I wish I had Jesus' wisdom.  As a public figure and spiritual leader, I can relate to the pressure he felt from people urging him to take a stand and pronounce his opinion on every issue of the day.  I feel that pressure too.  Is it not my job, as a preacher (a modern day prophet), to speak prophetically about the issues on the public's mind?  Isn't it--in some sense--the responsibility of all Christians to speak prophetically?

Well yes, but I don't think it means what people think it means.  All Christians are called and empowered to be prophets to some degree.  However, it's not a prophet's job to share their own opinion on every subject or answer every question people ask.  A prophet's job is to speak God's word.  We say only what God tells us to say, for God's ways are higher than our ways and His thoughts are higher than our thoughts.  We have to be careful, because misguided people have always tried to use prophets to further their own personal agendas instead of God's.  Prophets must be careful not to become a weapon in the hands of people fighting for their own worldly empires.

I have noticed that people in our country today like to pontificate most on issues in which they have no practical involvement.  We would rather focus on the evils of political leaders in Washington DC without knowing the least thing about a man or woman who serves on our own city council (a person who might live in our own neighborhood or have kids who go to school with our own kids).  We feel we must share our outrage about the plight of immigrant families a thousand miles away on the Mexican border while there are actually parents and children being separated from each other every day by DFACS a few houses down the road from where we live.  We speak on things we know almost nothing about because we're not there and we don't understand what's really going on or the real intricacies of the issue.  We get so upset based on what amounts to a tidbit of information fed to us by a business who's primary motivation is to sell us the "news."  (And it's big business.  How many billions or trillions of dollars does the news media drive?)

How much more effective would we be if we focused on our own communities and neighborhoods?  How relevant would we be if we threw our passion at issues we can actually touch with our own hands?  Then we might truly be able to speak up about the genuine problems in our own communities, the real needy in our own backyards that we could help if we sincerely wanted to.  Maybe then our cries for justice would be more than a clanging symbol amidst the roaring and practically meaningless noise all across the country.  Some people--the ones around us that really matter--might actually listen because they know us and have seen us with our sleeves rolled up and our dirty hands busily cleaning up our own neighborhoods and our own lives.  What kind of difference could we make--both now and for eternity--if we saw, like Jesus, that the problems all around us are rooted in our own tendency to turn away from God's Kingdom and waste our lives building our own little kingdoms instead?

I would rather be like the man in my church who fosters special needs kids than the person who screams on Facebook "Any person who doesn't reject Trump's policy for immigrant children is not a real Christian!"  I would rather be like the godly city councilmen I saw serving their community last night than the progressive and conservative calling each other names on social media.  If you care about helping needy kids, I invite you to join the group at my church who packs lunches for hungry kids at the elementary school next door or buys school supplies to give away for free.  Or go to a library and spend some time reading to kids at a summer reading program.  Help out at the City of Refuge as they feed hungry families in our community--including a large population of immigrants.  If you're really concerned about homelessness, join my church as we support Family Promise, an organization that actually fights homelessness in my community. (Do you even know what homelessness looks like or are you just picturing someone who's dressed in shabby clothes living under a bridge?)  If you believe in universal healthcare, I would show you the DEO Clinic that provides free healthcare and medicine to poor patients in Dalton, GA; they need more doctors and nurses and other volunteers and financial support.  They would love to put your passion to good, practical use.  Or how about you reach out to the guy who has an anxiety disorder and struggles to even leave his home, or help out the mother who's adult son has schizophrenia and is completely at her wits end because there is no help for her in our broken system except to put him in jail (which is really no help at all).  What practical opportunities to serve with more than just words are there where you live?  How could you be (as Proverbs 25:26 says) a refreshing resource instead of "a muddy spring or polluted water system"?

Most of all, I would like to be like Jesus who said, "You will always have the poor among you...," (Matthew 26:11) realizing the kingdoms of this world will always have problems to work on.  He also said, "Let the children come to me..." (Mark 10:14), so he could bless them.  The New Testament never reports that Jesus started a children's home or spoke out about the evil way the Romans were treating children across their empire.  Instead, Jesus taught about the nature of the Kingdom of God even as he took children in his arms, touched their heads, and blessed them. He warned people not to cause children to fall into sin (Luke 17:2) so they would have the hope of eternal life in the Kingdom of God.  Following Jesus as a Christian sometimes leads us to build a children's home or tackle other social problems, but we must never lose sight of God's Kingdom and let our project or our cause become our little kingdom.  I want to be like Jesus and give my life in service of God's Kingdom so that when all these little kingdoms on earth finally fade away, I will find myself with Jesus and all who had faith like a child that God would redeem it all just like He said through Jesus, the Christ.
Posted by Pastor Chris Mullis at 1:03:00 PM