1 Thessalonians 2:4 - For we speak as messengers approved by God to be entrusted with the Good News. Our purpose is to please God, not people. He alone examines the motives of our hearts. 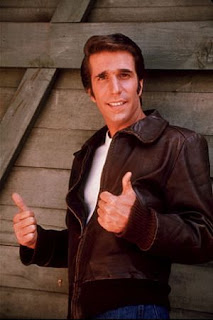 It took me 44 years, but I've finally done it.  I’m cool.  I always wanted to be cool.  When I was a kid, I used to watch the TV show “Happy Days” and idolize the character Arthur Fonzarelli (AKA Fonzie or the Fonz).  I was only five or six-years-old, but I wanted to be like the Fonz.  Fonzie was the epitome of cool.  Looking back now, it seems silly.  He had greasy hair, wore a white undershirt and a black leather jacket, and his “office” was in the men’s bathroom of Arnold’s Diner.  How in the world would anyone in real life think that was cool?  But somehow Fonzie was cool.  He could start the jukebox with the bang of his fist and snap his fingers and two beautiful girls would magically appear beside him.  I wanted to be cool like Fonzie my whole life.

In high school, my friends and I tried to be cool.  We dressed the way we thought cool people should dress and tried to hang out with the cool crowd.  But deep inside, I knew we weren't cool.  I’ve never had fashion sense; I’m socially awkward and shy.  Cool didn’t working for me.  I needed a new plan.

I resigned myself to just being ordinary.  I focused on my school work and went on to college thinking, “I will get a good job and make lots of money and maybe that will make me cool.”  Then, God laughed and called me into what the world might say is the most “uncool” career possible (and certainly not very lucrative): Christian ministry as a pastor of a mainline church.  (As Fonzie would say, “Ayyyyyyyy!”)

Maybe it took parenting teenage children to make me cool.  It’s enlightening to listen to teenagers talk about cool fashions and say things like, “You're too old to wear those shoes.”  And it’s revealing to see some ridiculous fashions from yesteryear suddenly become cool again.  Last year, my family harassed me for being a lame dad who wore Crocs with socks.  Last week, I was in a trendy restaurant and the fashionable waiter was wearing Crocs with white socks.  I pointed it out to my wife and she said, “Yeah.  It’s the cool style now.”  Really?  Who decides this stuff?

I’m didn't become cool because I took anyone’s fashion advice.  It happened because I finally realized I just don't care what people think about me anymore.  That’s actually the definition of cool.  I mean, look at the Fonz; he didn’t care.  He dressed how he wanted, talked how he wanted, lived how he wanted.  Nobody told him how to be cool.  Cool people don’t worry about all that lame stuff.  If they set any trends, it’s because they’re not trying.  They’re just living who they are.  That’s why people think they’re cool and try to copy them. (Ironically, trying to copy someone who's cool automatically make you uncool.)

So I guess I've just reached a point in my life where I really don't care what people think about me.  I care about the people, but not about their opinion of me.  I care what God thinks; I think it’s cool to walk with Him and seek His will for my life.  Now I'm not saying I don't care about people’s advice.  I want to be the best person I can be and sometimes feedback helps me be a better father, husband, pastor, or friend.  However, I'm not trying to make anyone think I'm cool.

I've already spent too much time in my life trying to please people.  Walking with Jesus—the coolest person I’ve ever met—helps me worry less and less about pleasing people.  I'm 44-years-old and I feel pretty cool.  You might not think so, but I don't care.  Sorry, not sorry.  That's why I'm cool.  You can copy me if you want.  I don't care about that either.  I'm not trying to be like anyone or be different than anyone.  I'm an original creation by the One True God of the universe.  There’s no one else like me and that’s incredibly cool.  Guess what: you are too.  Of course, I’m no expert and I certainly don’t claim to know everything, but that’s the Truth as far as I can tell…

Remember, God loves you and so do I!

Email ThisBlogThis!Share to TwitterShare to FacebookShare to Pinterest
Labels: 1 Thessalonians 2:4, Cool, The Truth As Far As I Can Tell...