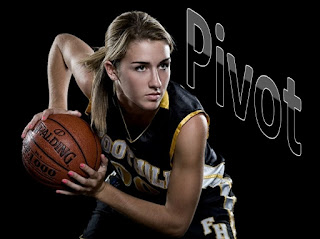 Luke 3:7-9
7 When the crowds came to John for baptism, he said,
“You brood of snakes! Who warned you to flee the coming wrath? 8 Prove by the way you live that you have repented of your sins and turned to God. Don’t just say to each other, ‘We’re safe, for we are descendants of Abraham.’ That means nothing, for I tell you, God can create children of Abraham from these very stones. 9 Even now the ax of God’s judgment is poised, ready to sever the roots of the trees. Yes, every tree that does not produce good fruit will be chopped down and thrown into the fire.”


Mark 1:14-15
14 Later on, after John was arrested, Jesus went into Galilee, where he preached God’s Good News.
15 “The time promised by God has come at last!”
he announced.
“The Kingdom of God is near! Repent of your sins and believe the Good News!”


Understanding the Scriptures
John the Baptist is the speaker in the Luke passage.  You may have heard of him.  John the Baptist was a fire and brimstone preacher. He didn’t cut people any slack. He’s known for preaching harsh, judgmental messages that pointed out people’s sins and called them to repent.  A lot of people in John’s day thought they were safe from God’s wrath because they were Jews—descendants of Abraham, God’s chosen people.  John thought differently. He called even the most righteous of them--the Pharisees--a brood of vipers! The fact that someone was a descendant of Abraham meant nothing to John.
If John were here today, he would bluntly proclaim it doesn’t matter what your parents and grandparents believed or did. All that matters is what you believe and do.   And John would look at you with his fiery eyes of judgment and boldly preach: “You need to repent! You need to turn away from your sins and turn to God!”
Most people today don’t like to hear that message. We’d much rather listen to Jesus—who was kind and healed the sick and ate with sinners and turned water into wine.  Our popular image of Jesus is a forgiving man who carries sweet little baby lambs around all day.  However, the Bible tells us Jesus preached the same message as John.  The “Good News” Jesus preached was this: “The Kingdom of God is near! Repent of your sins and believe the Good News!” (Mark 1:15)  Repentance was as much a part of Jesus' message as John's.

Repentance - The Pivot
Yesterday was Ash Wednesday. Ash Wednesday is the first day of the season of Lent. For
Christians, Lent is a 40-day period of spiritual preparation leading up to Easter. During Lent, we turn away from more worldly pursuits and focus on spiritual growth through prayer, study, and service.  This year, Lent runs from March 1 – April 15.  (By the way, if you look at a calendar and count up the days, you’ll find it’s actually 46 days. That’s because we don’t count the 6 Sundays in Lent. On Sunday’s, we always celebrate the resurrection of Jesus. And it just doesn’t seem right to mourn and fast and be somber when you are celebrating Christ victory of sin and death. So we get a break from Lent on the Sundays. That leaves 40 days.)

This year, Lent coincides with the NCAA Men’s College basketball tournament, popularly known as March Madness. So I will draw some parallels between the Christian faith and basketball.  In basketball, you cannot walk or run without bouncing the ball (known as dribbling).  If you stop dribbling, you cannot move anymore. You must stay in place. The only thing you can do is pass the ball to another player, shoot at the basket, or pivot.  Here’s how you pivot. You keep one foot firmly planted and you pivot (or turn) around on that one foot. With a pivot, you can legally turn all the way around without moving forward or backward.
The pivot is a good illustration for repentance.  Repentance 180 degrees pivot.  It is pivoting (or turning) away from sin and bad behavior toward God.  When we think about repentance, we usually emphasis the bad things we’re going to stop doing. “I’m gonna stop being so selfish…” That’s good! However, don’t forget you are pivoting away from sin toward God, which ought to lead you to do other things, good things. Here’s some examples:
The pivot—repentance—is the key to key to success in the Christian faith. You can’t be a Christian without it. 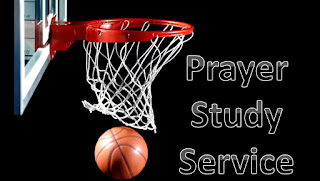 The 3-Point Shot
The key to success in a basketball game is often the 3-point shot. The 3-pointer was not always part of the game.  It was introduced in either the 1960s or 70s and it has changed the game.  Normally you get two points for making a basket.  However, if you are farther away—past the 3-point line—you get three points.  The 3-pointer has made teams with shorter players more competitive against taller teams.  The shorter players may be less effective driving to the basket for a lay up, but they may still hang back from farther away and score more points if they are accurate shooters.  This has changed the way many teams play the game.  Coaches need different game plans.  The 3-pointer has also made it possible for teams who fall behind in the score to catch up more quickly.
But that's basketball.  I’d like to challenge you to attempt a different kind of 3-point shot during Lent. This 3-point shot will help you pivot away from sin toward God.  For the 40 days of Lent, I challenge you to focus on three things:  prayer, study, and service.
1 - Prayer.  I challenge you to pray more during March Madness.  Pray at least five times every day.  That might seem like a lot for some people, but it's not as hard as you think.  Say a prayer when you wake up; it will help set the tone for your whole day.  Then pray again before you go to bed; it will help you have a more restful sleep.  Add to this a blessing before every meal (most people eat three meals each day) and you have a total of five prayers for the day.  You can also pray at other times during the day: while you are driving (keep your eyes open!), before a test at school or important meeting at work, as you think of something for which you're thankful, or whenever you think about praying.  Focusing on prayer will help you grow closer to God during the 40 days of Lent.
2 - Study.  I challenge you to study God's Word more during March Madness.  Perhaps you could read one chapter of your Bible each day; you could start with the Gospel of Matthew.  Another idea is to spend a set amount of time--10 or 15 minutes--hand copying the scripture.  This can be a very effective method for those who struggle to focus while they read (and it will let you practice yor handwriting).  Maybe you could join a Sunday school class or Bible study if you are not already part of one.  I invite you to come to my church on Wednesday nights or Thursday mornings for our study "The Story"   We have classes for kids, teens, and adults.
3 - Service.  Do something selfless every day to help someone else. It cold be a kinds word or offering a prayer for someone on Facebook.  We will have some opportunities at my church you can pug in to serve.  On Sunday, March 19, we will offer several outreach projects in or for our community.  On March 26, we will have a spring cleaning day at my church.  People will serve by cleaning up and making repairs to the church facilities.  We have other opportunities to serve as well.  I invite you to join us for one or more or all of these service opportunities.  It will help you grow closer to God as you serve.
I challenge you to make 3-point shot for March Madness.  Focus on prayer, study, service.  Try it for 40 days and see if it doesn't help you grow closer to God.  I pray you have a meaningful and holy Lent. 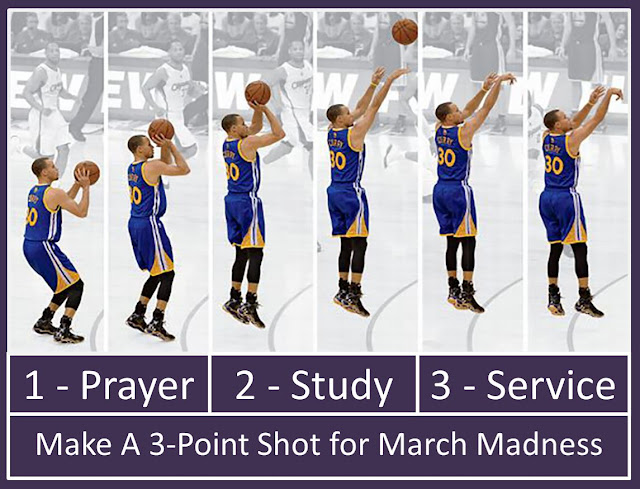