Jesus Rises from the Grave 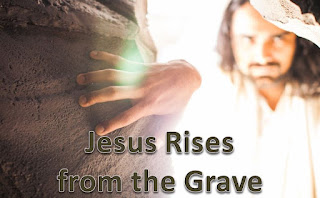 Where do you find ultimate meaning in life?  Do you even think such a thing exists?  That is the subject of today’s message.  The Christian faith promotes a relationship with Jesus as the way to ultimate meaning in life.  The Disciples thought they had found ultimate meaning, but then they suffered the great disappointment of Jesus' arrest, crucifixion, and death.  Suddenly, their faith was called into question.  On that first Easter morning, they were still in shock, trying to figure out what was going on.

Slides – Luke 24:1-12
1But very early on Sunday morning the women went to the tomb, taking the spices they had prepared. 2 They found that the stone had been rolled away from the entrance. 3 So they went in, but they didn’t find the body of the Lord Jesus. 4 As they stood there puzzled, two men suddenly appeared to them, clothed in dazzling robes.

5 The women were terrified and bowed with their faces to the ground. Then the men asked, “Why are you looking among the dead for someone who is alive? 6 He isn’t here! He is risen from the dead! Remember what he told you back in Galilee, 7 that the Son of Man must be betrayed into the hands of sinful men and be crucified, and that he would rise again on the third day.”

8 Then they remembered that he had said this. 9 So they rushed back from the tomb to tell his eleven disciples—and everyone else—what had happened. 10 It was Mary Magdalene, Joanna, Mary the mother of James, and several other women who told the apostles what had happened. 11 But the story sounded like nonsense to the men, so they didn’t believe it. 12 However, Peter jumped up and ran to the tomb to look. Stooping, he peered in and saw the empty linen wrappings; then he went home again, wondering what had happened. 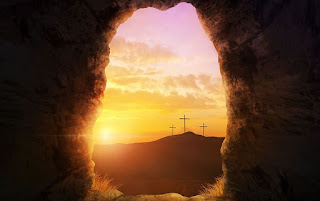 At Easter, we celebrate the resurrection of Jesus from the grave.  But in this Easter reading, Jesus does not yet appear.  The women went to put spices on the dead body of Jesus; but when they arrive at the tomb, Jesus is not there.  Peter rushes to the tomb to see the body, but Jesus is not there—dead or otherwise.
Usually when I think of Easter, I think of the radiant, resurrected Christ smiling and saying, “I told you so!  I told you I would come back to life!”  But here in this passage, we have only an empty grave and a pile linen.  It is the absence of Jesus in the passage that strikes me.  For those of us who know the way the story ends—we want to jump right to the point of acknowledging that Jesus is alive.  But let’s not get ahead of ourselves.
As I pondered this passage, it occurred to me that these twelve verses illustrate three common attitudes people have toward spirituality.  First we have the women—Mary Magdalene, Joanna, and Mary the mother of James.  They didn’t come seeking the risen Jesus.  Such a thing never occurred to them as a possibility.  They were looking only for the dead body of Jesus.  It was customary in that day to put fragrant spices on the body of the dead as a way of honoring those who had passed—much the way we place flowers on the graves of our deceased loved ones today.  We don’t go to our deceased grandma’s grave with flowers expecting to see her risen to life.  We go to remember the dead.  And so it was for the women in this passage.  They sought only to remember a dead Christ, not to see one risen in power and glory. 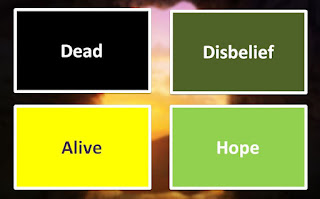 Dead
It strikes me how much that attitude prevails in church people these days.  These women came to the tomb in grief and sorrow.  They were looking for a dead man’s body.  They are like people who go through the motions at church, but aren’t truly seeking the living Christ.  They say and do the right things, but they only come to pay tribute to a dead man.  Their lives do not display the power and glory of the risen Christ and they do not reach their full spiritual potential.  It doesn’t matter how many flowers or spices they use to make it look or smell good, it’s still just dead and lifeless.  No wonder people turn away from a church that worships God like that.


Alive
But then, the women in our story saw something amazing that dramatically altered their state of mind.  They saw two men in dazzling clothes that appeared and told them the good news—Jesus is not dead!  He has risen from the dead, just as he said he would!  This sight seized their attention and they forgot all about their religious duty to put spices on a dead body.  Suddenly, they were filled with excitement and hope and they rushed off to share this astonishing story with the Disciples.
I have known quite a few church-goers who for years just went through the motions. They really didn’t come to church expecting anything exceptional. They were—in a sense—just seeking a dead man’s body. But then something shook them from their spiritual slumber and they forgot about their dead religion and started seeking the risen Christ. And suddenly, they began to worship and live with a new passion. They even begin to tell others about their wonderful new experience of life.


Disbelief
Next in the story are the Disciples.  If we examine them, we also see an attitude that is common in our day and age.  They took the women’s story to be nonsense.  The Greek word Luke uses to describe the women’s story is the same that Greek physicians used to describe the babbling of a fevered and insane mind.[i]  And that is how the disciples took the women’s story—it seemed like nonsense to them.  You can almost hear them saying to the women, “Why, just this morning you were going out the door, carrying all your spices to put on his dead body.  Now you claim he’s alive?!?  You must be sick with grief.  You're not making any sense.”
This is much the same as cynics in our time who say there is no real meaning to life (or that such meaning is unknowable).  They shrug off the stories of those who claim to have had deeply spiritual experiences.  Yes, and many people in our age look at the church and scoff.  They think these stories Christians tell about changed lives and divine power is a bunch of non-sense.  “Why, I’ve seen the way you worship at church,” they say.  “It’s boring and lifeless and dull.  If you ask me, you’re just worshiping a dead man.” They dismiss the church; they dismiss Christ; they refuse to believe.


Hope
But then there is Peter.  He hears the women’s story and he rushes out the door to investigate for himself.  And when he arrives, he sees that indeed the stone is rolled away and the tomb is empty.  All that’s left are the empty linen wrappings.
It’s ironic how things turn out.  According to Luke, Peter is the only one who runs to check out the women’s story.  Peter was not a particularly “spiritual” person in the sense we might think.  He was not a monk or priest or holy man of any sort.  He was a fisherman, a sailor, a common worldly man.  (Today, we use the expression, "He cusses like a sailor" for a reason.)  By Peter's own estimation the first time Peter met Jesus in Luke 5:8, Peter exclaimed, “I am too much of a sinner to be around you.” And yet it is Peter who goes to look in the tomb when all the other Disciples dismiss the story.  And it says when Peter saw the tomb was empty, he went away wondering what happened.
Peter reminds me of people in our age who are sincerely looking for meaning in life.  They may or may not consider themselves to be particularly “spiritual” people, but something prompts them to take a deep look at themselves and they recognize, “Huh… Something really important is missing.  I wonder where it is.”  And they start to honestly search.  They might look in quite a few places.  They might look for ultimate meaning in their career.  They might look for it in another person—a spouse or a friend.  They might look for it in a cause or in a family or in some other place.  But everywhere they look, they find only an empty tomb.  Where is that Most Important Thing that they crave? 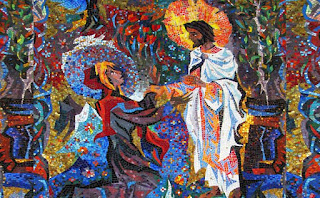 Which Are You?
The Christian faith teaches that life’s ultimate meaning is found through a relationship with Jesus Christ.  But some people miss out on the fulfillment that comes from a relationship with Jesus because they are like the women.  They are really only looking for a dead man.  Others are like the Disciples; they think the story of Jesus’ resurrection is a bunch of non-sense.  And still others are like Peter—they hear the good news, investigate for themselves, and discovered that the tomb is indeed empty.  Who do you resemble?
Are you looking for a dead man instead of a risen Savior?  Is your religious devotion helping you experiencing the life changing power of God or are you just trying to put sweet smelling spices and flowers on something dead?
Or maybe you are like the Disciples; you think all this talk about a risen Savior is just a bunch of non-sense.  You think, “There is no Higher Power and people don’t change.”  Maybe you’ve dismissed Christ and the church.  If so, I hope you will listen.  I hope you will take an honest look for yourself.  Maybe then you will see that there are a lot of empty, meaningless tombs in your life.  Maybe then you will say to yourself, “Huh…  Something important is missing in my life.  But maybe it’s out there somewhere.  Maybe what those Christians say is really true.  Maybe Jesus is alive.  And maybe Jesus is what I really need.”


Dear God,
Thank You for glorious hope of Easter—Christ is risen, just as he said.  Help us to see the empty tomb.  Jesus is not there.  Help us to see the lifeless parts of ourselves where Jesus cannot be found.  By Your grace, help us to surrender these to You, to let them go so that we can experience the divine, life changing power of the risen Christ living in us.  In Jesus name I pray.  Amen.


[i] William Barclay, The Daily Study Bible Series, the Gospel of Luke, revised edition; page 292
Posted by Pastor Chris Mullis at 9:40:00 AM