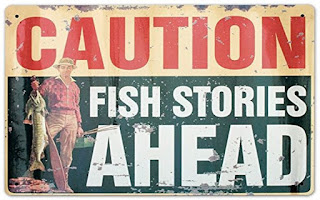 Some people have said Easter is just a fish story.  You know how fishermen tell exaggerated tales about the "biggest fish I ever saw."  Well, I'm here to tell you, the Easter story is true!  Jesus really did rise from the grave.  He is not dead.  He is alive and we can still see him if we have faith to see. 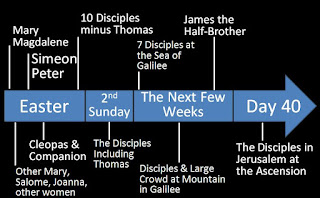 Jesus appeared many times to people in many places the days immediately following his
resurrection.  He appeared first to Mary Magdalene, and then to the other Mary, Salome, Joanna, and other women.  He also appeared to Simeon Peter, Cleopas and his friend, to the Twleve Disciples (minus Thomas) and then again to the Twelve when Thomas was there.  (By the way, the term Twelve became a term used to describe any collection of the original twelve disciples, even if it was only a partial group.)  Jesus also appeared to the disciples and a large crowd of followers on a mountain, to his half-brother James (who started out as a skeptic, but became a believer after seeing the risen Christ), and to the Disciples when he ascended back to Heaven.  Jesus also appeared to Stephen (who was the first Christian martyr) and Paul who had a hand in Stephen's murder.  And Jesus has shown himself in many ways over the centuries since.  We can still see the risen Christ today if we have faith to see.
The Easter story says that Jesus rose.  He is alive, not dead.  Easter is not a fish story.  But Easter does have a fishing story.

John 21:1-14 1 Later, Jesus appeared again to the disciples beside the Sea of Galilee. This is how it happened. 2 Several of the disciples were there—Simon Peter, Thomas (nicknamed the Twin), Nathanael from Cana in Galilee, the sons of Zebedee, and two other disciples.

3 Simon Peter said, “I’m going fishing.”
“We’ll come, too,” they all said. So they went out in the boat, but they caught nothing all night.

4 At dawn Jesus was standing on the beach, but the disciples couldn’t see who he was. 5 He called out, “Fellows, have you caught any fish?”
“No,” they replied.

6 Then he said, “Throw out your net on the right-hand side of the boat, and you’ll get some!” So they did, and they couldn’t haul in the net because there were so many fish in it.


7 Then the disciple Jesus loved said to Peter, “It’s the Lord!” When Simon Peter heard that it was the Lord, he put on his tunic (for he had stripped for work), jumped into the water, and headed to shore.
8 The others stayed with the boat and pulled the loaded net to the shore, for they were only about a hundred yards from shore. 9 When they got there, they found breakfast waiting for them—fish cooking over a charcoal fire, and some bread.

10 “Bring some of the fish you’ve just caught,” Jesus said. 11 So Simon Peter went aboard and dragged the net to the shore. There were 153 large fish, and yet the net hadn’t torn.

12 “Now come and have some breakfast!” Jesus said. None of the disciples dared to ask him, “Who are you?” They knew it was the Lord. 13 Then Jesus served them the bread and the fish. 14 This was the third time Jesus had appeared to his disciples since he had been raised from the dead. 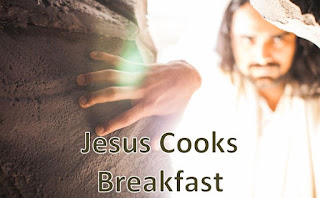 In this story, five of the disciples are named and two are unnamed.  I kind of feel bad for those two who were not named and wonder why John didn't name them.  I guess it wasn't important.  However, God knows who they were.  Do you ever feel like you are forgotten or unrecognized?  Don't feel bad.  It happened in the Bible too.  But God knows who you are and He will recognize you in the end.  Count it a blessing, like these two unnamed disciples who got to see the risen Christ.
Now the disciples couldn't see Jesus.  Perhaps it was still to dark or there was some morning fog or they were too far from shore.  They didn't know it was Jesus at first.  But then John realized it was Christ when they caught so many fish.  It reminded him of another time they had caught so many fish because of Jesus.  Once John's faith kicked in, he knew it was Jesus directing them from the shore.  Faith helps us see the risen Christ.  Peter had faith too.  When John told him, "That's Jesus!"  Peter was convinced enough to leap in the water and swim to Jesus to say hello.
There on the shore, they found Jesus cooking breakfast and they all gathered around to share the meal.  Some have speculated Jesus was just a ghost or spirit.  But ghosts and spirits don't cook or eat.  Clearly, Jesus wanted everyone to know he was real flesh and blood and very much alive and healthy and walking around in a real body.
Food is always held up as a central element of God's Kingdom.  Jesus taught stories using food.  He described the Kingdom of God as a grand banquet.  Jesus gave us the sacrament of Holy Communion to remember him with bread and wine.  And here in this story, we find Jesus cooking and eating with his disciples.
Fish for Breakfast
Where I live, we are not accustomed to eating fish for breakfast.  I was in Jerusalem a few years ago and they had a breakfast buffet for guests of the hotel.  I expected to find the usual fare--pancakes, fruit, cereal, etc.  I did find those, but also there was plenty of fish to choose from.  Fish is a big part of the Mediterranean diet--even for breakfast.  And it was so for the Disciples as well.

Fish are an important element in the story of Christian faith.  Half the disciples were fishermen.  Jesus performed several miracles using fish and also used elements from the fishing industry to make his points.  And Jesus said the disciples would become fishers of men.
Early Christians adopted the fish as a secret symbol of their faith.  Even today, Christians often attach a fish symbol to the back of their car.  Why is that?  The Greek word for fish is ΙΧΘΥΣ and is the acronym for "Iēsous Christos, Theou Yios, Sōtēr", which translates to "Jesus Christ, Son of God, Savior."  Sometimes, when a Christian met a stranger and wanted to find out if they were a Christian too, the Christian would draw one half of the fish symbol on the ground.  If the other person drew the other half of the symbol, it confirmed that they were also Christian and they could talk openly about their faith without fear of persecution. 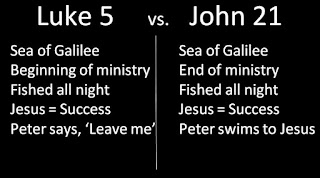 Luke 5 vs. John 21             Our fish story from John 21 resembles another fish story from Luke 5.  Comparing the two stories is enlightening.  They both took place on the Sea of Galilee, but the one from Luke was at the beginning of Jesus' ministry where the one from John is near the end.
In both cases, the Disciples fished all night long without success.  And in both cases, Jesus brought a miraculous catch.  From this we can see that Jesus is the source of the Christian's success.  If we are struggling and toiling and don't seem to be getting anywhere, perhaps we should pause and look for the risen Christ.  Perhaps we should listen more closely for his instruction and try something different and then we will find a great catch.  And just like the Disciples, our faith can be renewed.
Peter responds very differently in the two stories.  In Luke, Peter is convicted of his sin and says to Jesus, “Please leave me--I’m such a sinful man.”  But look how far Peter has grown since the beginning.  In this story (after three years with Jesus), Peter leaps into the water and swims to be the first to greet Jesus. Peter knows he is still a sinful man, but he also knows that is why he must swim toward Jesus and not away from him and that Jesus will accept him unconditionally.  Do you realize Jesus accepts you unconditionally?  Are you swimming toward the risen Lord with hope or running away in fear? 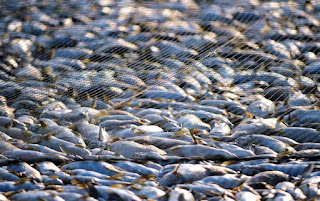 In Luke's story, the net starts to break because it has so many fish.  In the resurrection story from John, there are just as many fish but the nets don't break.  I think this is a symbol of what Christ's resurrection has done.  On the cross, Christ accomplished everything that needed to be done.  Now his “fishers of men” can fish with strong, unbreakable nets.  We can drag in the catch with perfect confidence.  Because of Christ's resurrection, we can live and serve unhindered and with full strength and purpose.
John’s story is very specific.  153 large fish were caught.  That's so specific, it stands out like the smell of fresh fish cooking in a kitchen.  John did that on purpose because he had a secret, symbolic meaning to share.  Unfortunately, we have lost that meaning over the centuries.  Many have speculated what it could be.  Some came up with interesting ideas, but the we don't know of sure.
One thing we can say is that a fishing net is indiscriminate.  You don't pick which fish you catch.  The net just drags everything up all the same.  But John says all 153 fish were large fish.  They were all "keepers" in modern fishing lingo.  And so it is in the Kingdom of God.  We are not called to discriminate about who comes into the Kingdom.  We are called to cast the net.  And whoever believes and swims into our Gospel net, we are to drag ashore.  Some will be slimy and smelly (all of us really are), but we are called to love them just the same.  Besides, it is Jesus' job to receive them, clean them, and prepare them for breakfast.  And he will make each one who is willing perfect in God's sight. 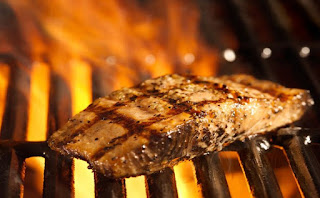 Breakfast is Served
I want to leave you with three practical ideas to take home from this story.  First of all, have you been dragging up empty nets?  Look for Jesus.  Listen for his voice.  Maybe he’s telling you to try something different.
Second, have you had a miraculous catch?  Then, look for the risen Christ.  A miraculous success is often a sign he is near.  In those times, be thankful, and seek to swim even closer to him.
And last, this story reminds you that you count.  The only way the Disciples could know the exact number of fish in the net is if they counted them.  Each one was numbered.  And so it is with each of us.  Jesus picks each one of us up, looks us over, and records us in the Book of Life.  He knows us by name.  He knows everything about us.  And he loves us.  We are all keepers in his sight.
You are one of the 153 fish the Disciples caught.  You may be a little smelly and slimy.  But Jesus loves you.    And he loves that guy over there too--the one who has piercings and tattoos, the one who is gay, the one who uses vulgar language, and everyone else too.  It is not our job to decide who makes it in.  Our job is just to cast the Gospel net and let God decide who gets caught up in the Kingdom.
Posted by Pastor Chris Mullis at 12:31:00 PM