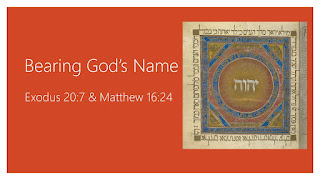 Introduction
[Click here to listen to this message.]
It's the second Sunday of the New Year.  Many are still thinking about goals for 2020 so I asked Terry Teasley to put two ideas from the Bible on our church sign that would make great goals for 2020:
DON’T BEAR GOD’S NAME IN VAIN
(which comes from the Old Testament)
and
TAKE UP YOUR CROSS AND FOLLOW ME (which comes from the New Testament).
The two terms are closely related.  The Phrase from the Old Testament comes from Exodus 20:7 and is part of the Ten Commandments. 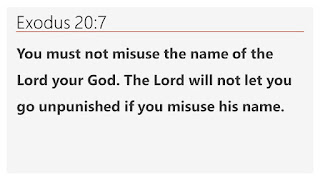 Exodus 20:7
You must not misuse the name of the Lord your God. The Lord will not let you go unpunished if you misuse his name.

The New Living Translation says do not misuse the name of the Lord; the King James Version says do not take.  The old ways of saying this I head as a kid was, “Thou shalt not bear the Lord’s name in vain.” As I was telling Terry what to put on the sign at church, I had to think for a minute on how to spell the word bear.  You can spell it bare, but that means unclothe.  Of course, bear is an animal that could rip you to shreds.  But bear also means to lift or carry.  And that is what the original Hebrew word in the third commandment means: nawsaw - to lift, to carry, to bear.

As a child, I was taught this commandment means you shouldn’t  use God’s name to cuss (or even to say, "Oh my God!") Although using foul language is not good and using God’s name as part of your cursing is even worse, that is not what the command “Do not take the Lord's name in vain” means.  What it really means is don't misrepresent God. 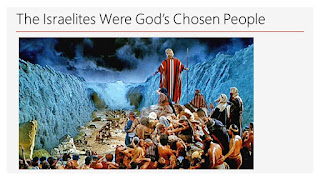 The Israelites Were God’s People
God chose the Israelites to be His people.  They were His representatives to the whole world.  Everything about them was to be distinctive and different from all the other nations around them.  They were to eat different food.  They were to treat people differently.  It was common in the ancient world to seek violent retribution.  If you attacked my son and poked his eye out, I might get revenge by killing your whole family.  God commanded the Israelites not to be like that, but to offer restraint.  He said, only take and eye for and eye and a tooth for a tooth.  The were to live justly, love mercy, walk humbly with their God.

The Israelites worshiped differently than all the other nations around them.. All the other religions had idols to look at when they worshiped.  Or they worshiped things they could see in nature like the sun, the moon, animals, etc.  The Israelite’s God was invisible and they were forbidden to make any image or statue to represent Him. The only authorized image for God is people! Genesis 1:26 says, "God said, “Let us make human beings in our image, to be like us." So ironically, we are to be the "idols" who represent God, even though because of sin we fail miserably.  All the Law of the Old Testament was God's instructions on how the ancient Israelites were supposed to take up the name of God and represent Him to the world properly.

The way the Israelites worshiped was one way they represented the name of God.  Exodus 13:16, “This ceremony will be like a mark branded on your hand or your forehead. It is a reminder that the power of the Lord’s mighty hand brought us out of Egypt.”  That's powerful language; worship is like having God's name branded on your forehead!  If you worship at church on Sunday, it tells people you belong o God.  It's one way we bear His name.  But what about when you are eating lunch at the restaurant after church.  Does how you treat the wait staff bear proper witness to God's name? 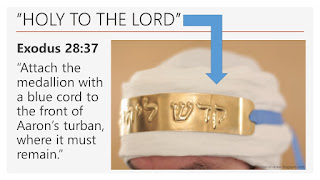 The Israelites were to dress differently. They weren't supposed to wear clothing made of two different kinds of fibers, say cotton and wool (see Leviticus 19:19).  So many of the rules in the Old Testament seem unnecessary!  However, God was making a point.  The Israelites were set apart as distinct from all other people.  They were His people.  They were to be His representatives to the world.  They were to Bear His Name.  And for that purpose, God even gave the Israelite specific commands to carry His name on their foreheads.

Israelites were to wear scriptures in a small box on their forehead.   Deuteronomy 6:8 instructs the Israelites to tie Scripture proclaiming their devotion to the One True God to their foreheads.  And according to Exodus 28:36-38, the Israelite high priest was to wear a gold medallion on his forehead on which were inscribed the words HOLY TO THE LORD.  Holy means set apart.  And the word we translate as “The Lord” is actually God’s proper name in Hebrew--Yahweh.  So the priest was literally bearing God’s name on his forehead.

So, when the Third Commandment says, "Do not bear the Lord's name in vain," it literally meant, "Do not put this name on your forehead if you don't really mean it. Otherwise, you will misrepresent me and you will be punished!" 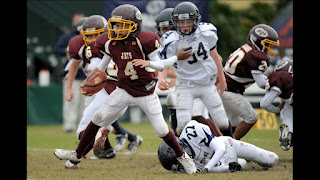 Sports Teams and Misbehavior
I'll never forget something my football coach taught when I was just a kid. We had just gotten our uniforms and I was so excited!  The fresh smell of brand new jerseys filled the air as coach passed them around.  He said, "Remember, whenever you put on this uniform, you represent our whole team. It's not just about how well you play football.  If you misbehave while wearing this uniform, it reflects on the whole team.  You must represent us well.”

The Atlanta Falcons saw firsthand how damaging it can be when one team member misbehaves.  In 2007, Falcons star quarterback, Michael Vick, was accused of involvement with an illegal dog fighting ring.  Vick's bad behavior tarnished the whole team's name.  Nobody wants their brand associated with that kind of cruelty.  The Falcons lost fans and sponsors and their star quarterback.  Vick was suspended from the NFL and the Falcons sued to recover $20 million of Vick’s signing bonus.  It took years for the team to recover.  And to this day, many people still remember this awful shame.

Many people would never in a million years use God's name as a curse word, but the same people might misrepresent God's name by the way they misbehave.  God doesn’t want His Holy Name to be shamed.  So He commanded the Israelites (and us), “Do not bear the Lord's name in vain.”

Bearing God's Name in the New Testament
We aren't ancient Israelites. We don't have to tie scripture verses to our foreheads. We don't have priests who wear gold medallions on their foreheads that bear the words Holy to Yahweh.  But Christians are still God's representatives. And we ought to be the most faithful representatives He has because we follow Jesus Jesus Christ.  Jesus showed us how to live as God's redeemed holy people.  And that brings me to Christ's statement in the New Testament. 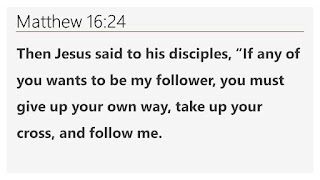 Matthew 16:24
Then Jesus said to his disciples, “If any of you wants to be my follower, you must give up your own way, take up your cross, and follow me.

Jesus names the Christian uniform.  It is a cross.  But the cross Jesus identifies is more than a symbol we wear on a necklace.  He identifies it this way:  You must give up your own way.

In our natural, sinful state, we each have our own selfish way we want to go.  Perhaps we want to indulge our selfish desires for food, sex, or pleasure.  All of these are good things when done the right way, but we want to gorge ourselves beyond God’s natural design.  Maybe we struggle with greed.  We cannot be happy with what God wants to give.  We want more, more, more (and more is never enough). Or maybe we cling to our pride and refuse to be like a humble child.  All of these are our ways of living and Jesus says, “You must give up your own way and take up your cross follow me.”

Jesus has a right to demand we take up our cross because it’s what he did.  The Gospel of John says Jesus is God in the flesh; He created us.  If anyone has a right to demand His own way, it is Jesus, the King of kings and Lord of lords.  Instead, Jesus humbled himself, “...gave up his divine privileges; he took the humble position of a slave, and was born as a human being… and died a criminal’s death on a cross.”  (Philippians 2:7-8, adapted)

Christ calls all His followers to do the same.  And though our cross may not mean dying on a literal cross, it always means denying our self as we follow Christ--at least until what we want is perfectly aligned with what God wants.

What God wants from us is love--love for God and our neighbor.  In fact, Jesus said, “Your love for one another will prove to the world that you are my disciples.” (John 13:55) 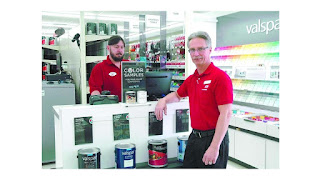 A few months ago I was at ACE Hardware and another customer started asking me where she could find a certain product.  I was a little confused as to why she was asking me, but I told her where I thought they might be.  Then, she said, “You don’t work here do you?”  She had thought I was an employee!  I don’t know why she thought that.  Maybe I just had that ACE Hardware kind of style going on that day.  (I do often wear slacks and a golf shirt with my church logo on it.  I like to represent God and  my church whenever I can.)  The lady apologized and I didn’t mind.  I hope she found what she was looking for (or else a real employee who could help her.) Has that ever happened to you?

If you are a Christian, you are to bear the name of God everywhere you go (even if you are not wearing a cross or Christian logo).  You represent Christ.  You bear a figurative cross.  To bear a cross means to forsake your own selfish ambitions. It means to deny yourself (if your own desires are contrary to God's will). Just as Jesus was willing to lay down his life on the cross in order to do God's will and save the world from sin, we are to sacrifice our own plans for the sake of God's. This is how Christians represent God, our Creator. 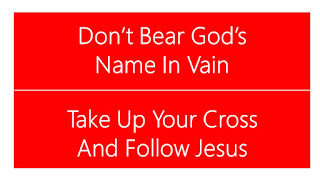 Conclusion
So as you live into this new year, this new decade, how will you bear the name of God?  I pray you will not bear the name of God in vain, for we are commanded, “You must not misuse the name of the Lord your God.”  Therefore, confess your sins and forgive others that the Lord may forgive you.  Keep your promises.  Love the Lord your God with all you heart, and all your mind, and all your strength.  And love your neighbor as yourself. Take up your cross and follow Jesus.  Seek always, to represent our Lord the way He deserves to be represented.  Amen?  Amen!