The Ten Plagues of Egypt, Plague 10 - The Death of First Born Sons 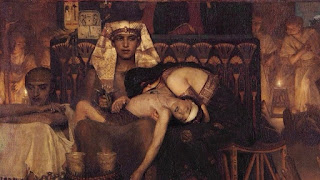 Introduction
The people in the Bible were real people living in the real world.  Don't ever forget that—especially as we consider this terrible 10th plague. Every 1st born through the land of Egypt died as the Angel of Death passed over the land--from the firstborn son of Pharaoh to the firstborn of the lowest servant, even the firstborn among the animals died. (COVID has effected all of us. Most of us know of someone who has had it.  The 10th Plague effected every family personally. In one dark night, every single family had someone die.)

Some would question why would God send such a terrible plague.  Well, I’m not one to questions God’s judgments (nor am I one to lightly blame God for every disaster that comes).  This passage clearly says God is the one who sent the plague.  There is a biblical principle that a person reaps what they sow.  How did Egypt treat the Israelites?  Pharaoh issued a terrible edict that every male child born among the Hebrews must be thrown into the Nile river. Do you remember that?  Moses was one of those baby boys that was to be murdered in the Nile river.  He escaped miraculously by the hand of God.  And now that same Moses is the instrument that God used for retribution against Egypt.  What comes around, goes around and the judgment you use against others is the same judgment that will be used against you.

This was the most terrible plague of all that struck Egypt as the Lord brought judgment on all of Egypt's false "gods".  It was caused by Egypt's sin (which had persisted for centuries)and arrogance and the stubbornness of their leader, Pharaoh, who refused to surrender to God and let His people go. 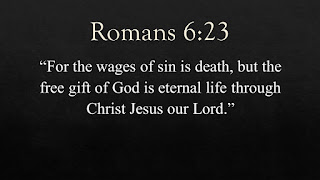 The Consequences of Sin
The first lesson for you today is this:  Your sin and idolatry doesn't just effect you.  The effects of sin spread from you to others like a virus.  Pharaoh’s son died on that fateful night when the Angel of Death passed over Egypt carrying out God’s judgment.  But other Egyptians—perhaps more reasonable people who were less cruel than Pharaoh—suffered the same fate as they watched their firstborn son’s struck down because of their nation’s sins.

So when you suffer because of your own sin, you may think you are getting what you deserve and the price is paid.  But who is paying the price for the suffering and evil you sin brings on your family and your neighbors?  The sins of pride, greed, lust, envy, gluttony, wrath, and sloth (and others) aren’t just deadly to you.  When you sin, it affects everyone around you—especially the people you care about most.  The affects of our sin can continue for generations.  You may still be suffering the affects of some of the sins your parents, grandparents, or great grand parents--alcoholism, abuse, etc.  These sins have a ripple effect down through the generations.  Your sins today, may have a similar affect on your children, grandchildren, or great grandchildren.

I believe God is calling people today to surrender to Him—just like He was calling for Egypt’s unconditional surrender through Moses.  The 10th plague shows the deadly consequences when we stubbornly refuse to listen to the Lord--even though He comes to us again and again.  It hurts us and even those we love most.

Romans 6:23 – “For the wages of sin is death, but the free gift of God is eternal life through Christ Jesus our Lord.” 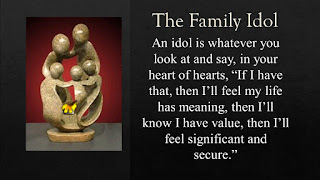 The Family Idol
Throughout this series, I’ve tried to show you that we have idols in the modern world just as much as the ancient Egyptians.  Whereas they worship gods fashioned after frogs and cows and snakes, many people today worship idols of money, power, pleasure, patriotism and other false gods.  An idol is whatever you look at and say, in your heart of hearts, “If I have that, then I’ll feel my life has meaning, then I’ll know I have value, then I’ll feel significant and secure.”[i]

Idols don’t necessarily start out as bad things.  They often begin as very good things but become idols to us because we make them the ultimate things.  Then, they become our gods.  Even family can become an idol.

As we approach the Thanksgiving holiday, family is on the hearts and minds of many people.  We want to gather with those we love most and most people have a strong tradition of visiting family during the holidays (even if their relatives annoy them).

Jesus was once teaching when he said something very challenging about family.  “As Jesus was speaking to the crowd, his mother and brothers stood outside, asking to speak to him. Someone told Jesus, “Your mother and your brothers are standing outside, and they want to speak to you.”  Jesus asked, “Who is my mother? Who are my brothers?” Then he pointed to his disciples and said, “Look, these are my mother and brothers. Anyone who does the will of my Father in heaven is my brother and sister and mother!” (Matthew 12:46-50)

In Jesus’ Kingdom, family isn’t defined by our genetics—those who are our biological brothers and sister.  Out brothers and sisters in the truest sense are the people who share our common goal to do the will of God (our Heavenly Father).

Jesus’ earthly family—in the beginning of his ministry—thought he’d lost his mind.  They saw their relative saying things that threatened the political authorities and attracted huge crowds of followers.  They wanted to take him home and shut him up.  They couldn’t see he was doing the will of God.  (Or maybe they were too afraid to care.)

When we put our family before the will of God, we turn them into idols and worship them ahead of God.  The results are terrible.  Idols lead us into darkness.  They always disappoint and destroy lives.  We should love our earthly family, but if we hold our children so tight we treat them like our gods, we will crush them under the weight of unfair expectation they cannot fulfill.  If we treat our parents like gods, they will be destroyed by the impossibility of living up to the role of God.  Our brothers and sisters are only our equals.  No mere mortal can ever fill the shoes of God and to expect them to is insane and inevitably leads to suffering. 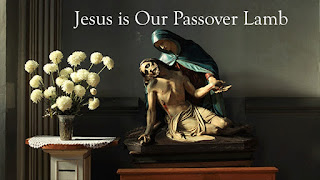 Jesus is Our The Passover Lamb
The Israelites slaves in ancient Egypt were spared the horror of the 10th plague.  Each family was to choose a perfect lamb or goat without any defects.  They were to sacrifice the animal and smear some of its blood on the sides and top of the doorframe to their home.  The blood would mark their household as belonging to God and everyone inside would be covered by the blood and the Angel of Death would Passover their home without bringing harm to anyone inside.

The Israelites were no better than the Egyptians.  They were sinners too.  But the blood of their “Passover Lamb” signified they were in submission to God and therefore, God forgave their sins and gave grace instead of judgment.  (Incidentally, the same escape was available to the Egyptians.  They could choose to apply the blood to their doorframes as well and there is good reason to believe some did.  Of course, in doing so, they were turning their back on the gods of Egypt and turning toward the God of Israel.  And if they did, they were spared.)

So in the morning after the 10th plague, it says “There was not a single house [in Egypt not covered by the blood] where someone had not died.” (Exodus 12:30).  I can’t imagine.  But this is the terrible cost of sin.

In the New Testament, John the Baptist announced the coming of Jesus Christ.  Pointing to Jesus, John said, “Look! The Lamb of God who takes away the sin of the world!” (John 1:29).  In 1 Corinthians 5:7, it says, “Christ, our Passover Lamb, has been sacrificed for us.”  The Gospels tell us Jesus was arrested and crucified during the Jewish holiday of Passover—the holiday when they commemorated God’s deliverance of the Jews from slavery in Egypt after the 10th plague.  Jesus is the Son of God.  His blood pays the price for our sin.  And when we surrender to God—turning from our sins and idols and false gods and turning to God—Jesus blood, the blood of the Lamb, covers us and delivers us from death and slavery caused by sin.

Invitation
These 10 plagues are not just stories and myths.  They happened to real people like you and me.  As we struggle through the COVID-19 pandemic, I pray it has opened your eyes to your own vulnerability and mortality.  I hope you realize how desperately you need the saving power of God in your life.  I pray, it will not take another 9 plagues (like it did for the Egyptians before they surrendered unconditionally to God).  Please turn from your sins and turn to God today.  It doesn't just affect you; it affects everyone.

1 John 1:9 says, “If we confess our sins to him, he is faithful and just to forgive us our sins and to cleanse us from all wickedness.”  Let’s pause for a moment of silence to reflect on our sin, confess them to God, and allow God to cleanse us with the blood of Jesus, our Passover Lamb.

You are going to need help to walk with the Lord.  Please contact me and let me know of the decisions you’ve made so I can help you in your next steps.

[i] pages xvii and xviii of Counterfeit Gods: The Empty Promises of Money, Sex, and Power, and the Only Hope that Matters