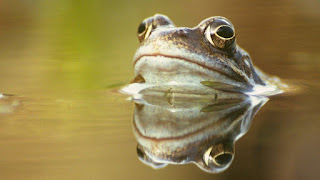 Last week we saw that Moses turned the Nile into blood to punish Pharaoh for not letting God's people leave slavery in Egypt.  The Nile was full of blood for seven days.  However, Pharaoh was stubborn and wouldn't let God's people go.  So God sent another plague.

Exodus 8:1-8
Then the Lord said to Moses, “Go back to Pharaoh and announce to him, ‘This is what the Lord says: Let my people go, so they can worship me. 2 If you refuse to let them go, I will send a plague of frogs across your entire land. 3 The Nile River will swarm with frogs. They will come up out of the river and into your palace, even into your bedroom and onto your bed! They will enter the houses of your officials and your people. They will even jump into your ovens and your kneading bowls. 4 Frogs will jump on you, your people, and all your officials.’”

5Then the Lord said to Moses, “Tell Aaron, ‘Raise the staff in your hand over all the rivers, canals, and ponds of Egypt, and bring up frogs over all the land.’” 6 So Aaron raised his hand over the waters of Egypt, and frogs came up and covered the whole land! 7 But the magicians were able to do the same thing with their magic. They, too, caused frogs to come up on the land of Egypt.

8 Then Pharaoh summoned Moses and Aaron and begged, “Plead with the Lord to take the frogs away from me and my people. I will let your people go, so they can offer 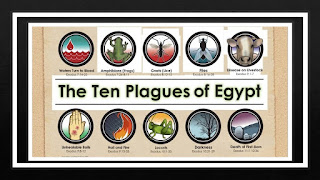 Egyptian Idolatry
Ancient Egypt was an impressive civilization. I learned last night while we were playing Apples to Apples as a family that Egyptians were the first to popularize the idea of applying scents to armpits, usually using cinnamon and other spices that wouldn't turn rancid in the heat.  They invented one of the first forms of writing.  They constructed remarkable buildings such as the Great Pyramids and Temples and tombs that are still consider great wonders of the world today.

Yet, Egypt was mired in sin.  As a very powerful empire, they abused their power to mistreat neighboring peoples.  They enslaved the Hebrews and then tried attempted genocide by forcing the Hebrews to throw their baby boys into the Nile River.  They were also guilty of idolatry,

One of the most heinous atrocities of the Egyptians was forcing Hebrews to throw their baby boys into the Nile River.  Now, there is a natural repulsion in every human heart at even the thought of taking a helpless infant and throwing them in a river to drown.  I know that’s wrong.  You know it’s wrong too.  It doesn’t matter what language you speak, what color is your skin, or from what time in history or what country you come from.  Every human being instinctively knows killing babies is wrong.  We know it because God created us with a natural sense of right and wrong.  We value life because God values life.  We want to protect the powerless because God protects the powerless.  We were made in God’s image. Even though we are warped by sin, we still reflect His character.  As America's funding fathers expressed, "We hold these truths to be self-evident..."

But we also want to do what we want to do.  We don’t want God restricting our behavior (I’m speaking in a worldly sense here).  And so, if we don’t like what the One True God says, then we’ll just change it.  “Let’s just make a minor adjustment here.  There!  I like this god much better!”  And then someone else comes along and says, “Yeah, but, I don’t like that other thing about God.  I would much rather God were this instead of that.”  And they make another little change to god to make Him the way they want him to be.  And this can go on and on and on until the god you are left with doesn't look like the One True God at all.

And so as Romans 1:21b-23 says, “…they began to think up foolish ideas of what God was like. As a result, their minds became dark and confused. Claiming to be wise, they instead became utter fools. And instead of worshiping the glorious, ever-living God, they worshiped idols made to look like mere people and birds and animals and reptiles."

When people start compromising the truth and start making their gods to be they they want the to be, it’s not long until your “gods” start condoning things like drowning Hebrew babies in the Nile River.  The Egyptians were smart, intelligent, creative, resourceful people.  Unfortunately, they turned into utter fools because they turned their backs on the truth in favor of lies.  (America, be warned!) 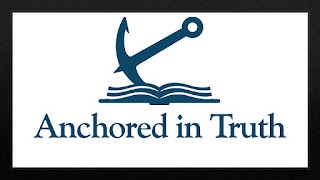 Anchored in the Truth
Do you realize how incredibly blessed we are to have the Holy Bible? The Bible helps us know the Truth. It guards us from forgetting the character of God and recreating Him into whatever we want Him to be. The Word of God doesn’t change.  The same story about the ten plagues of Egypt we're reading today is the same story Jesus read 2,000 years ago.  We read the same stories and characteristics of God that people have always read.  These words haven't changed and they won't change.  Now, everyone can read the words for themselves and come to their own conclusions.  And honest people may all come to slightly different conclusions.  That's why we have Methodist and Baptist and Pentecostals, etc.  However, though we have varying interpretations, we are all anchored to the same Holy Bible.  We are like ships floating at anchor in the open sea.  We may drift this way and that, but we won't drift of into never never land because we are anchored.  And so a Methodist ship may float to the left and a Baptist one may float to the right, but we are still in the same general area.  It is when we severe the connection to Scripture that we float away into crazy heresies that have nothing to do with the One True God of the Bible.  Some have done this.  Some are doing this now.  They don't like this or that about God and what His Holy Word says in Scripture.  So they decide to disregard the Bible.  And in doing so, they are doing something like the Egyptians who made idols to represent gods the way they thought they should be or the way they wanted them to be. 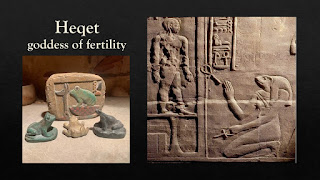 But Why Did God Send a Plague of Frogs?
Egypt had thousands of gods. “Instead of worshiping the glorious, ever-living God, they worshiped idols made to look like mere people and birds and animals and reptiles.”  And one of their most important gods was the goddess Heqet, which they imagined looked like a frog.  She was the goddess of fertility.  Egyptians imagined that Heqet was the wife of Knume, the guardian of the Nile River.  (Remember how last week we saw the One True God turned the Nile River into blood, proving that Knume could not protect the Nile from God because Knume has no real power?)  The Egyptians believed Knume formed the bodies of new children on his potter's wheel and then their frog goddess breathed life into them.  An Egyptian mother giving birth depended upon the frog goddess to hasten birth.  New mothers-to-be often wore amulets depicting Heqet sitting in a lotus.

Frogs were sacred in ancient Egypt.  They were not to be trampled upon.  God—the One True God of the Bible—has a sense of humor, don’t you think?  It’s like He said, “Ok.  So you think frogs are sacred.  You think these slimy creature represent your fertility goddess? OK.  I’ll gonna give you so many frogs you won’t know what to do with them!  You won’t be able to walk without stepping on 10 or 15 of them with each stride!  They’re gonna be in your houses and in your bedrooms and even in your beds.  Let’s see you try to make some babies while you’ve got frogs crawling all over you!”

Once again, the God of the Hebrews shows the Egyptians that their gods are nothing.  If Heqet is real, why didn’t she (or any of the other Egyptian gods) stop this nonsense? They couldn't.  Only Yahweh, the Great I Am of the Hebrews has any real power.

What’s Your Favorite Idol?
I doubt anyone reading this today actually bows down to worship a statue of a frog.  But Americans have their idols too.  Tim Keller states in his book Counterfeit Gods, an idol is “anything more important to you than God, anything that absorbs your heart and imagination more than God, and anything that you seek to give you what only God can give.”  If we’re honest with ourselves, I think many may realize we have idols today too.

So what’s your favorite idol?

Is Wealth Your Idol? 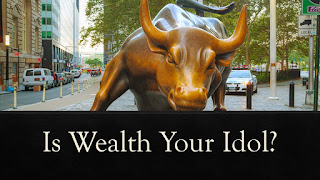 Are Pleasure & Entertainment Your Idols? 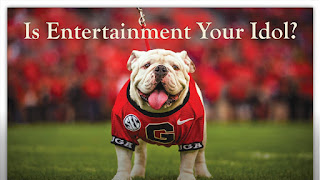 Is love or relationships your idol? 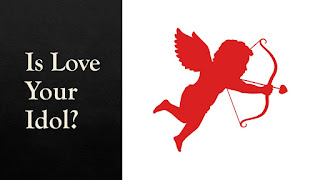 Are your children your idol? 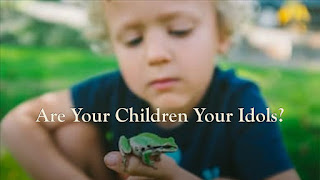 Is your intellect and intelligence your idol? 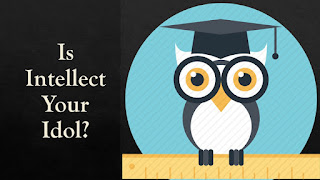 Is America (or your nation and way of life) your idol? 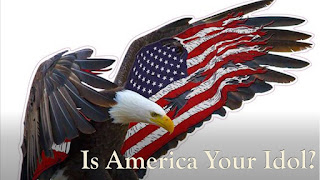 Are you your idol? 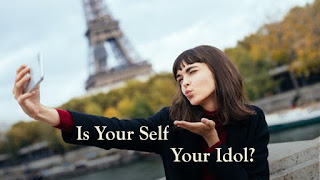 Or is it something else?


The things we turn into idols aren’t necessarily bad in and of themselves.  Frogs aren’t evil.  They have their place.  They are living creatures God made and they are important to the environment.  But they are not gods.  Children are an important blessing God gives us to nurture and love.  But they are not gods.  Money, intellect, national pride… none of these things are evil in and of themselves.  It is when we expect them to do for us what only God can do that we run into trouble.  It is when they are more important to us than God that we sin.  It is when they absorb our heart and imagination more than God that we are heading towards destruction. 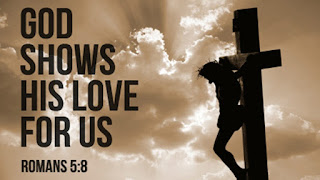 Closing
What are you clinging to as an idol that you need to let go of today?
I invite you to repent of your idolatry and turn to Jesus for forgiveness.
He will forgive you and show you who God really is in the most accurate way.
And where do you see what Jesus is like?
It's not the popular image of Jesus that's been made up by our world.
It's not what you think about Jesus. (You don't get to make Jesus whatever you want him to be.)
Jesus is not necessarily what the “experts” says about him. (Experts sometimes term out to be fools.)
Your Bible is where you read the most accurate description of who Jesus is and what he did and what he expects from us.  John 3:16 may be the best summary of it all where it says, "For God so loved the world that he gave his one and only son so that whoever believes in him will not perish but have eternal life."  That's a great summary.  But let's don't stop there.  Read the Bible.  Study it.  Trust the Jesus you find there and follow him.