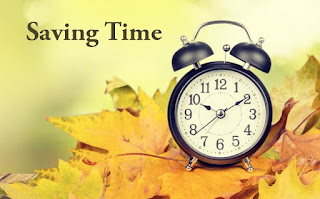 Introduction
Late Saturday night, we turned our clocks back one hour for the end of daylight saving time.  DST was suggested way back in the 1700s by Benjamin Franklin as a way to optimize the use of extra daylight in the longer days of summer.  DST didn't really catch on until the late 1960s/early 1970s.  Now it is common through most of the world to adjust our mechanical clocks to more closely reflect the pattern of the sun in the summertime.
People didn't need daylight saving adjustments in Jesus day because they didn't rely on mechanical clocks or watches.  Everyone back then reckoned time according to the sun, so daylight usage was self-regulating.  Even a sundial would self regulate because it determines time based on how the sun shines--longer days would automatically give you longer hours on the sundial.
Regardless of how you tell time, there never seems to be enough hours in the day to get everything done.  Have you ever prayed that there could be more?  Well, I want to read a story from the Bible about a time God’s people prayed for more hours in the day and how they used their extra time.  And I want you to ask yourself, “What would I do if I had an extra hour in the day?”
Before I read the passage, let me give you a little background.  You may remember that the Israelites were slaves in Egypt, but God used Moses to deliver them.  Since the Canaanites were an evil people who had turned their backs on God, God said He was going to give that land to the Israelites.  After Moses passed away, Joshua became the leader of the Israelites and led them to conquer Canaan.  City after city fell before the Israelites and the Gibeonites made a peace treaty with Israel promising to be their servants if they would be their allies and help protect them from the other cities in the area.  Joshua agreed an the Gibeonites became the Israelites ally, signing a mutual defense treaty.
There were also five Amorite kingdoms who were becoming fearful of Israel's growing power.  They were even more alarmed when the Israelites allied with the Gibeonites.  The five Amorite kings formed an alliance of their own, thinking five kingdoms working together could easily defeat the two kingdoms of Israel and Gibeon.  The five Amorite kings attacked Gibeon.  Gibeon sent messengers to Israel saying, "Help! Help! We're under attack!"  And Joshua led the Israelites army to their defense and God fought for them.

Joshua 10:9-14 9 Joshua traveled all night from Gilgal and took the Amorite armies by surprise. 10 The Lord threw them into a panic, and the Israelites slaughtered great numbers of them at Gibeon. Then the Israelites chased the enemy along the road to Beth-horon, killing them all along the way to Azekah and Makkedah. 11 As the Amorites retreated down the road from Beth-horon, the Lord destroyed them with a terrible hailstorm from heaven that continued until they reached Azekah. The hail killed more of the enemy than the Israelites killed with the sword.

12 On the day the Lord gave the Israelites victory over the Amorites, Joshua prayed to the Lord in front of all the people of Israel. He said,

“Let the sun stand still over Gibeon,
and the moon over the valley of Aijalon.”
13 So the sun stood still and the moon stayed in place until the nation of Israel had defeated its enemies.
Is this event not recorded in The Book of Jashar? The sun stayed in the middle of the sky, and it did not set as on a normal day. 14 There has never been a day like this one before or since, when the Lord answered such a prayer. Surely the Lord fought for Israel that day! 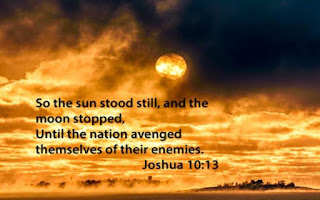 Explanation
In this passage, we see the army of Israel defeated the five Amorite armies.  And God fought with them--raining down a terrible hailstorm that killed more enemy soldiers than were killed with a sword.  And then an amazing thing happened.  Joshua prayed for the sun to stand still in the sky so the Israelites would have enough daylight to finish destroying the Amorite armies before it got dark and they could slip away to fight another day.
A lot of people find all this killing in the Bible hard to stomach.  It was a gruesome business, but it was a gruesome time.  My point today is not to talk about the violence in the Bible.  Aren’t you glad we don’t have to fight the battles Joshua fought?  However, let us not forget that in America, though we may live in relative ease, our freedom and peace do not come without cost.  Thank God most of us will never need to pick up a sword or a gun and kill in order to protect ourselves or our loved ones or our country or our faith.  However, never forget that there are others who fight on our behalf; and many of them our comforted to know God may fight along side them as He did for Joshua and his army.
Joshua needed more time to finish his violent mission for God, but thankfully, we can use our hours to be obedient to God in less violent ways like love, mercy, repentance, salvation, healing, and building relationships.  But do we?  Do we use our time wisely or do we squander the gift we’ve been given?
Today, I want to give you four things you can do to use your time wisely.  We gained an hour over the weekend.  I know that the time change has already occurred, but it will probably take your body a few days to adjust.  It is likely that (for a few days at least) you might wake up before your alarm clock goes off.  What will you do with the extra time?  Here are some suggestions I offer. 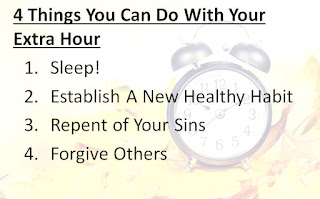 4 Things You Can Do With Your Extra Hour
Number 1 - Sleep!  There's no guilt in getting a little extra sleep.  Experts recommend 7-9 hours of sleep per night.  40% of American don’t get enough sleep and a lack of sleep can lead to health problems and cognitive impairment.  So, discipline yourself to get enough sleep.  Go to bed on time so you can get up on time and be the sharp person you need to be.
Number 2 - Establish a new healthy habit.  Go for a walk.  Experts tell us that walking for just 30 minutes a day can lead to better health and a better attitude.  And these can lead to a better spiritual life.  If you wake up before you alarm goes off,  you could also toss and turn in your bed or you could get up and spend the extra time in prayer and then follow up with people by sending a card, text, or email.  Or you could use the extra time to read a few chapters from your Bible, read an Upper Room daily devotion or a good Christian book.  Maybe you could Write cards, bake some cookies to take to someone to show them you care.  All of these would be a good use of your time.
Number 3 – Repent of your sin and turn to God.  Hebrews 3:12-13 says, "See to it, brothers and sisters, that none of you has a sinful, unbelieving heart that turns away from the living God. But encourage one another daily, as long as it is called “Today,” so that none of you may be hardened by sin’s deceitfulness."  God will forgive any sin—even if you’ve done it over and over and over—but the longer you go without repenting, the harder it is.  Your heart becomes hard, so don't put it off.  Turn to God today!
Number 4 – Forgive others.  Ephesians 4:26-27 says, "And “don’t sin by letting anger control you.” Don’t let the sun go down while you are still angry, for anger gives a foothold to the devil."  We should be quick to forgive. But why?  Harboring a bitter grudge in your heart provides a foothold to the devil.  Think of your heart like castle with massive walls to protect it from evil.  Nothing can scale the walls to harm you inside.  But when you refuse to forgive, it creates foothold and hand holds so the devil can climb right up and over your castle walls.  Once inside, he can do all kids of damage.  So be quick to forgive and keep your heart safe and protected.

Conclusion
So what are you going to do with your time this week?  I encourage you to pray about it and ask God to use your time wisely.

Pastor Chris Mullis
I'm a pastor, dad, husband, and child of God. I'm broken, but blessed. The cracks are where the Light shines through. My mission is to help people grow closer to God with every breath and step I take. I gave my life to Christ at an early age and have grown closer through the years, spurred on by the study of the Bible, my church family, and the Chrysalis and Walk to Emmaus Communities. I accepted the call to full -time ministry as a pastor in 1999 and have served 4 different churches in Georgia. Music, preaching, and teaching are the heart of my ministry. Outside of the pulpit, I enjoy many hobbies that help me blow off steam. These include martial arts, woodworking, blacksmithing, gardening, cooking, and being creative. I'm a jack of all trades and a master of none. My philosophy is use what you have, do it yourself if you can, learn something in the process, and have lots of fun. This blog is a place to share it all with you.
Older Posts Home
Subscribe to: Posts (Atom)