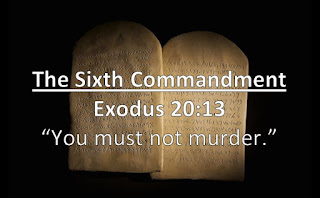 
Introduction
Today, We'll get back on track with the 10 commandments after being on a a break for the past few weeks.  We've already covered commandments 1-5; over the next 5 weeks we will look at 6-10.  I had to giggle as I was preparing because school starts back Friday in Whitfield County, GA and the commandment today says do not murder!  So teachers (and students), remember that this school year!
I challenge you to memorize all 10 commandments this summer.  How many of the commandments can you name by memory so far.  Here's the whole list:


Today we will look at the Sixth Commandment as found in Exodus 20:13
13 “You must not murder.” 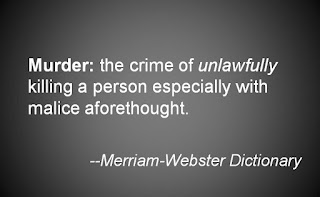 The commandment says, “Do not murder,” and everyone knows that.  Almost every culture throughout history has inherently understood that murder was unacceptable.  Do we really need to be told?  I think everyone can agree you should not murder.  But what is murder?  The Bible also teaches that murderers should be put to death.  Wouldn’t killing a murderer also be murder?  And what about warfare?  Isn’t a soldier sometimes required to kill in the midst of the battle?  Is  that murder?
Merriam Webster defines murder as “the crime of unlawfully killing a person especially with malice aforethought.”  The online encyclopedia, Wikipedia, goes on to elaborate, “Murder is the killing of another person without justification or valid excuse, and it is especially the unlawful killing of another person with malice aforethought.”
So there seems to be some circumstances that justify the killing of another human being.  The Law of God in the Old Testament spells out some circumstances where killing are justified.  For instance, Exodus 22:2 says, “If a thief is caught in the act of breaking into a house and is struck and killed in the process, the person who killed the thief is not guilty of murder.”  This biblical idea goes along with our modern idea of justifiable homicide, also known as self-defense.  In other words, if someone is attacking you and posing an imminent danger to your life or limb, you may be justified in taking their life in order to protect your own.  That would not be considered murder, but reasonable self-defense.

In other places in the Bible, God clearly commands soldiers to attack a city or to defend a city during times of warfare and killing is an inevitable part of warfare.  Yet this is not considered murder.  This biblical concept as part of our understanding of the rules of modern warfare; the killing of enemy combatants during warfare according to the rules of war is not considered murder.
Furthermore, capital punishment—taking the life of someone who has been convicted of a serious crime—is also part of God’s law in the Old Testament.  Such punishments would not be considered “murder” as they are justified by God’s law.  There is much debate about whether capital punishment is acceptable in our world today, but the prevailing thought in America at this time is that execution for convicted criminals is not murder.  It would be considered by law a justification or valid excuse for taking another person’s life.  (Keep in mind, capital punishment is not a punishment an individual meets out on a criminal; it is applied by the state and only after a fair trial and conviction followed by numerous possibilities for appeal by the criminal.)
Now, I am not a lawyer and my goal today is not to clarify all the inner workings of America's legal system.  I’m simply trying to dig down to a clearer understanding of what murder is.  Murder is willingly and with the deliberate intent to do evil, killing another person unlawfully.  And I think almost everyone can agree murder is wrong.

Jesus’ Teaching on Murder
As I have said in previous sermons, the Ten Commandments teach us basic rules for living a good and pure life that is pleasing to God.  However, they do more than just that.  The Commandments also show us how we fail to live justly and thus desperately need God’s grace and forgiveness throughout our life.  And yet some will come to the Sixth Commandment and try to hang on to traces of self-righteousness.  We might try to justify ourself and say, “Yes, it is true that I have not always put God first in my life (so I have broken the First Commandment).  I may have broken other commandments too, but at least I am not a murderer.”
The implication of this kind of thinking is that we might be bad, but we’re not that bad and God should cut us some slack.  This kind of thinking ignores James 2:10, which says, “For the person who keeps all of the laws except one is as guilty as a person who has broken all of God’s laws.”  However, in our human thinking we still try to justify ourselves and make levels of righteousness.
I think it is helpful to hear what Jesus taught in regards to the Sixth Commandment about murder.  In Matthew 5:21-22, Jesus said, “You have heard that our ancestors were told, ‘You must not murder. If you commit murder, you are subject to judgment.’ But I say, if you are even angry with someone, you are subject to judgment! If you call someone an idiot, you are in danger of being brought before the court. And if you curse someone, you are in danger of the fires of hell.”
You see, Jesus is the fulfillment of the Commandments.  His role is never to point out just how far we can go and still get away with “murder.”  Jesus challenges us to live up completely to God’s standards and realize it is impossible.  (For is there really anyone among us who has not become angry with another person?  Is there any among us who has not called someone an idiot (or had a similar thought in our heart)?  There are few—if any—who have not done all of these or worse at some point in our life.)  And Jesus points out—rightly so—that if you have not been completely perfect, as he is completely perfect, you have fallen short.  You are guilty.  You deserve punishment.  You are not worthy of God’s glory.  You have no right to put yourself above anyone else.  We are all sinners.  We are all in the same boat—in desperate need of God’s forgiveness and grace.  Therefore, let us get rid of any notion in our heart that we are good, or “not that bad” or at least “not as bad as some.”  We are all just sinners.  Period. 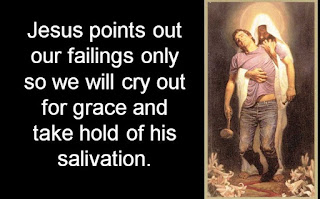 Jesus points out that we are sinners.  His perfection illuminates our imperfection.  His purity, our impurity.  But that is not Jesus’ whole purpose.  He did not come to condemn us, but to save us.  He points out our failings only so we will cry out for grace and take hold of his salvation.  The bad news of our sinfulness draws our attention to the Good News of God’s forgiveness in Christ.
So Christ comes to us today and he challenges us to see our sin and desperate need of God’s grace and forgiveness.  And Christ himself, offers us God’s grace.  It was purchased by his death on the cross.  Though we were the ones who deserved death, he paid the price for us.  Will you accept his gift?  Will you cry out to God and say, “I am sorry for my sins!  Please forgive me!  Wash me clean and make me new!”  Perhaps that is why God brought you here today.
Perhaps you would like to pause for a moment of silent prayer so you can confess your sin and ask God’s forgiveness.  Then, let me offer my own prayer on our behalf. 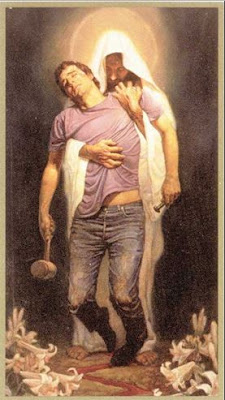 Directed prayer:
“Father God in Heaven, please forgive us of our sins.  We know we have failed to live the way you asked—sometimes by what we have done wrong and sometimes because of the right things we have failed to do.  Forgive us for breaking your commandments.  Through Your grace, help us to begin today to be your people by following Your son Jesus, learning his teachings, and living like him as best we can.  Amen.”
Posted by Pastor Chris Mullis at 9:03:00 AM