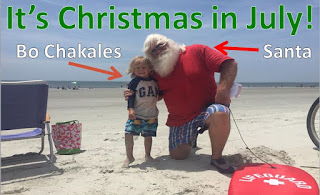 Introduction
Sometimes we get so busy in the Christmas season it’s hard to actually enjoy Christmas.  That's why I want to look at the Christmas story in July.  Maybe now, in the middle of summer, you may see/hear Christmas a little differently.
Last Christmas, I was studying and preparing for a sermon, when I discovered a fascinating insight in William Barclay’s commentary on the Gospel of Matthew.  It did not go with my message at the time, but I set the idea aside specifically for “Christmas in July.”  So this message has been over 8 months in the making and you are reading it today for a reason.  I pray you will listen to what the Lord is saying specifically to you.


Matthew 2:1-12
2 Jesus was born in Bethlehem in Judea, during the reign of King Herod. About that time some wise men from eastern lands arrived in Jerusalem, asking, 2 “Where is the newborn king of the Jews? We saw his star as it rose, and we have come to worship him.”


3 King Herod was deeply disturbed when he heard this, as was everyone in Jerusalem. 4 He called a meeting of the leading priests and teachers of religious law and asked, “Where is the Messiah supposed to be born?”


5 “In Bethlehem in Judea,” they said, “for this is what the prophet wrote:


6 ‘And you, O Bethlehem in the land of Judah,
are not least among the ruling cities of Judah,
for a ruler will come from you
who will be the shepherd for my people Israel.’”


7 Then Herod called for a private meeting with the wise men, and he learned from them the time when the star first appeared. 8 Then he told them, “Go to Bethlehem and search carefully for the child. And when you find him, come back and tell me so that I can go and worship him, too!”


9 After this interview the wise men went their way. And the star they had seen in the east guided them to Bethlehem. It went ahead of them and stopped over the place where the child was. 10 When they saw the star, they were filled with joy! 11 They entered the house and saw the child with his mother, Mary, and they bowed down and worshiped him. Then they opened their treasure chests and gave him gifts of gold, frankincense, and myrrh.


12 When it was time to leave, they returned to their own country by another route, for God had warned them in a dream not to return to Herod.
An Outsider’s View 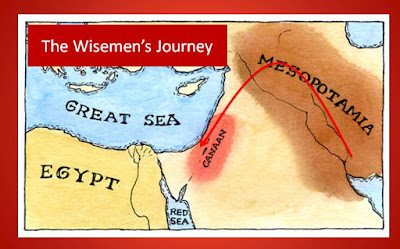 Sometimes it takes an outsider to see something everyone else takes for granted.  The Wisemen in our story were outsiders to the Holy Land.  Also known as Magi, these men were probably astrologers from what is now modern day Iran.  They spent their life studying the stars and planets for omens to predict important events on earth.  The Wisemen saw something so phenomenal it inspired them to take a journey of thousands of miles on foot (or camel).  It would have taken months to make the trip to see the child they believed was born King of the Jews. It would have required numerous stops along the way for rest, resupply, bathroom breaks, and maintenance (you know you have to change the oil in the camel every three months!).  All this for a “King” you never met before, but only read about in the stars.  How far would you go to meet Jesus?  Obviously, the Wisemen had high hopes for this new king.

By the time they arrived in Jerusalem, the Wisemen expected everyone to know about the momentous birth of their “New King.”  And yet, no one seems to know anything about Jesus.  And as the Wisemen tell what they have seen in the stars, the people in the story soon gather into three different groups according to how they respond to the news of Jesus birth.  And ever since Jesus came, people have found themselves in the same three groups according to how they react to Christ--people are either disturbed, disinterested, or deeply devoted. 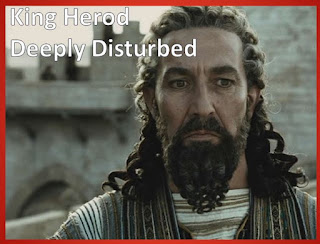 Deeply Disturbed
Some people—like King Herod—are deeply disturbed by Christ because they fear he might interfere with their life.  So they seek to silence or destroy Christ.  King Herod was a ruthless ruler who held onto his power despite the highly fragile political realities in which he governed.  The Roman Empire had conquered Judea, but allowed King Herod to rule autonomously—as long as he remained loyal and kept the volatile people of his kingdom in check.  Herod faced threats from outside from the Roman authorities who could depose him at any time as well as threats from within from political opponents, as well as violent extremists and religious fanatics who rejected Herod’s legitimacy to rule.  Herod maintained his power for decades, despite these obstacles, by ruling with an iron fist.  Not knowing who he could trust, Herod became paranoid that everyone was out to get him.  So he disposed of anyone who made him feel vulnerable or threatened.  The list of people Herod murdered to maintain his power included his wife, his mother-in-law, his eldest son, and two of his other sons.  The Roman Emperor, Augustus, remarked bitterly that it was safer to be Herod’s pig than his son.[i]
Can you imagine how an insanely suspicious and murderous king like Herod would receive the Wisemen’s news that a “new” King of the Jews had been born?  He was deeply disturbed.  “Herod was afraid that this little child would interfere with his life, his place, his power, his influence, and therefore his first instinct was to destroy him.”[ii]
William Barclay writes in his commentary on this passage, “There are still those who would gladly destroy Jesus Christ, because they see in him the one who interferes with their lives.  They wish to do what they like, and Jesus will not let them do what they like; and so they would kill him.  The man whose one desire is to do what he likes has never any use for Jesus Christ.  The Christian is the man who has ceased to do what he likes, and has dedicated his life to do as Christ likes.”[iii]
There is a loud voice crying out in our world today that says we deserve to live as we please—that we have the right to satisfy our desire—even if it goes against God’s Word and natural design.  The same misguided voice proclaims that to deny ourselves is unhealthy, a denial of our individuality, and to be inauthentic and untrue to ourselves.  But Christ says, “Whoever wants to be my disciple must deny themselves and take up their cross and follow me.” In time, as Christ heals our selfish hearts, we may find that we come to love to do what Christ likes.  But it is often not so in the beginning.
You may be disturbed by Christ because you fear he will interfere with your life.  Are you going to embrace him and let him change you, or are you going to try to destroy and silence him? 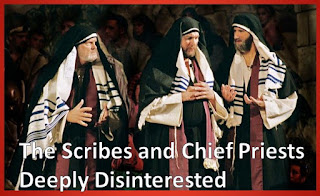 Some people are disinterested in Jesus; they don’t care one way or another.  The scribes and chief priests were so engrossed in their politics, their “religious” rituals, and their legal disputes, that they completely disregarded Jesus.  He meant nothing to him—except only to the extent that news of Christ’s birth disturbed their king Herod’s fragile personality which in turn disrupted their own status quo.
Again, Barclay writes, “There are still those who are so interested in their own affairs that Jesus Christ means nothing to them.”[iv]  There are many who think, “Who has time to worry about ‘religion?’  I don’t need Jesus.  I can do just fine on my own.  I’ll leave all that spiritual nonsense to the religious fanatics, the poor, and the uneducated.  I don’t have time for it.”
Sadly, it often is not until same terrible tragedy comes in a person’s life that they will become interested in Jesus.  When cancer strikes or a love one dies unexpectedly, then suddenly people begin to cry out to a God they had little interest in before.
I am a kind person, but I find myself in a strange place sometimes—praying for people who are deeply disinterested in Jesus.  Sometimes I must pray for God to send trials and tribulations that are trying enough to shake people out of their apathy so they will become interested in Jesus before it is too late.
Are you one of these disinterested people?  What will it take to wake you from your spiritual slumber so you recognize your deep need for the love and power of Christ?  I pray it will not take some terrible tragedy.  Why not turn your thoughts and interests to him today?

Deeply Devoted
And finally, there is a third group—those who are deeply devoted to Christ.  Barclay wrote, “There was the reaction of the wise men, the reaction of adoring worship, the desire to lay at the feet of Jesus Christ the noblest gifts which they could bring.  Surely, when any man realizes the love of God in Jesus Christ, he, too, should be lost in wonder, love, and praise.”
The Wisemen followed the star to the ends of the earth to find the King of kings.  How far are you willing to go?  The Good News is, you don’t have to go far.  Jesus is right here, right now.  He ordained this day long ago as the day you would have the opportunity to bow down and worship Christ—to decide in your heart, “I want to dedicate my life to following Christ—to go where he leads me, to do what he wants of me.”


Invitation
The Wisemen presented gifts of gold, frankincense, and myrrh.  But what Christ wants from you is your heart.  Which type of person are you today?  As you react to Jesus, are you deeply disturbed, deeply disinterested, or deeply devoted?  Now is the time to decide.  Now is the time to respond.