The Truth As Far As I Can Tell... The Christian Flag 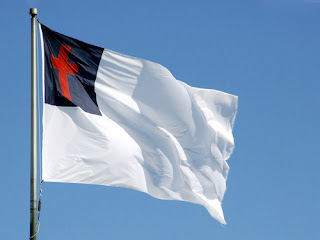 
36 Jesus answered, “My kingdom is not from this world.”


Last week, we enjoyed a great time with a wonderful group of kids at Vacation Bible School at Pleasant Grove UMC.  Each evening, we began with an assembly where we said the pledges of allegiance to the American flag, the Christian flag, and the Bible.  That got me thinking about the Christian flag and where it came from.  So I did a little research and thought I would share what I found.  The following excerpts are from Wikipedia.com.


Flags are used to rally our loyalty.  To which “kingdom” are you most loyal?  Is it your family?  Is it your southern heritage?  Is it the country in which you grew up?  Is it your favorite college football team?  Is it the branch of the military in which you served?  All these earthly “kingdoms” will one day cease.  Perhaps you should switch your allegiance to something eternal—to Jesus and his Kingdom.  Of course, I am no expert and certainly don’t claim to know everything, but that’s the Truth as far as I can tell…
God loves you and so do I!

Email ThisBlogThis!Share to TwitterShare to FacebookShare to Pinterest
Labels: Allegiance, Flag, Flags, Jesus, John 18:33, John 18:36 Truth, Kingdom of God, Loyalty, My Kingdom is Not of this World, Pledge of Allegiance, The Christian Flag