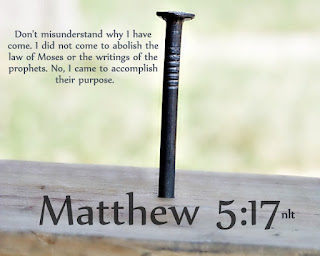 Christ’s life, death, and resurrection fulfilled the Old Testament Law and ushered in a new era of God’s grace, changing the way we apply the laws of the Old Testament[i].  The Old Testament Law can be subdivided into three major categories:  moral laws, civil laws, and ceremonial laws.  Let’s look at how Jesus’ fulfillment of these three kinds of laws affect the way Christians apply these laws today.


Moral Laws  (The 10 Commandments, sexual ethic, etc.)
The moral laws show us our sins so we know how much we need Christ.  Also, they teach us how to act in love towards our neighbors.  Jesus fulfilled the moral requirements of the Law to perfection since we couldn’t, but he also restated many of the moral laws and said we should follow them—including the sexual ethic of the Old Testament.  These moral laws are also restated by the other New Testament writers so they still apply to Christians today.  Moral laws guide us to love God and love our neighbors—which are the greatest commandments (Matthew 22:36-40).


Civil Laws (Laws about slavery, stoning, etc.)
In the Old Testament, the people of God were the nation-state of Israel.  In the New Testament, Jesus reconstituted the people of God so they are a universal Church embodied in numerous local gatherings around the world and subject to the laws of secular governments. The Old Testament laws relating to the civic life of Israel (such as requiring the death penalty for grave sins) no longer apply to believers today in the same way as they did in the Old Testament.
Ceremonial Laws
Ceremonial laws encompass two subcategories—cleanliness laws (don’t touch lepers or eat pork or shellfish, etc.) and worship laws (sacrifices, circumcision, etc.)  Jesus declared all foods clean (Mark 7:19) and also touched lepers and dead bodies, and was not made unclean by doing so.  Thus, Jesus ended the cleanliness and food laws of the Old Testament.  Yeah!  We can all enjoy our pork BBQ and bacon!  Jesus also taught his body was the true Temple and his death was the ultimate sacrifice for sin (John 2:21, Mark 14:36). Thus, his death opened the way for us to approach God, making Old Testament regulations concerning the Temple and its sacrificial system obsolete.


[i] http://www.livingout.org/arent-we-just-picking-which-bits-of-the-old-testament-law-apply-today
Posted by Pastor Chris Mullis at 8:30:00 AM