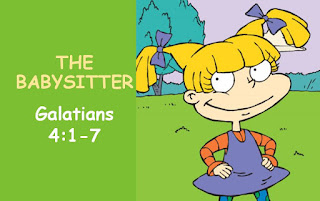 Introduction
Babysitters are some of the most unsung heroes of our lives.  We have Mothers' Day, Fathers' Day, even Grandparents' Day; don’t you think we should have a Babysitters' Day?  (Actually, there is!  Every year, the Saturday before Mothers' Day is Babysitters' Day!  Who knew?)
I have 3 kids.  They were each spaced about four years apart.  That means we have had precious babysitters helping us manage spanning throughout our lives going all the way back to 1998--that's twenty years!  Since our youngest, Abigail, turned 11 this year, we have mostly moved 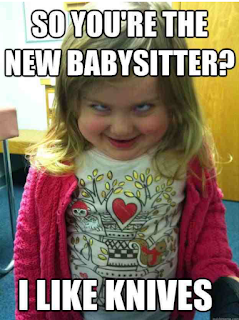 beyond babysitters (though we still need them occasionally when we are gone overnight).  Abigail is old enough and mature enough to stay at home alone for long periods of time by herself.  Plus, she has older siblings that are mature enough to supervise her (and can even drive her to school or church or other places if needed).
That was not always the case for our family.  We couldn't have made it through without so many sweet and helpful people who pitched in to babysit our kids through the years.  Sometimes it was our family--grandmas, aunts, and uncles.  However, since we have usually lived to far away from family, it was more often our friends at church who stepped up to watch over our kids when we couldn't.
Did you know that the Apostle Paul talked about babysitters in Galatians?  As he spoke about freedom to the Galatians, Paul likened the Old Testament Jewish Law to a babysitter watching over minor children.  Listen to what he said. 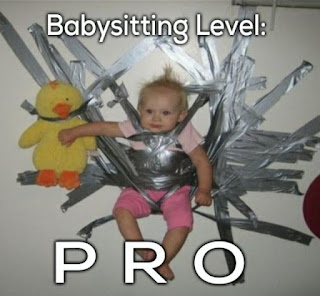 1Think of it this way. If a father dies and leaves an inheritance for his young children, those children are not much better off than slaves until they grow up, even though they actually own everything their father had. 2 They have to obey their guardians until they reach whatever age their father set. 3 And that’s the way it was with us before Christ came. We were like children; we were slaves to the basic spiritual principles of this world.

4 But when the right time came, God sent his Son, born of a woman, subject to the law. 5 God sent him to buy freedom for us who were slaves to the law, so that he could adopt us as his very own children. 6 And because we are his children, God has sent the Spirit of his Son into our hearts, prompting us to call out, “Abba, Father.” 7 Now you are no longer a slave but God’s own child. And since you are his child, God has made you his heir. 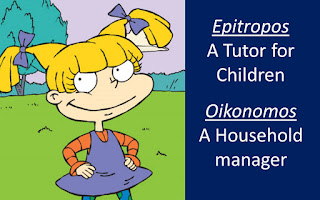 The Babysitter
The Apostle Paul originally used two greek words in verse 2 that the New Living Translation translates as guardians:  Epitropos and Oikonomos.  An Epitropos was a tutor for children.  An Oikonomos was a household manager whose duties would also include watching over children.  Families often used these tutors and managers as guardians or babysitters for minor children.  And, if the parents died, the epitropos and oikonomos would serve as guardians for minor children until they were old enough to live on their own.
What is Paul talking about?  He’s talking about the function of the Old Testament Law in relationship to Christians.  Before Christ came, the Old Testament Law served as humanity’s spiritual babysitter.  What does a babysitter do?  Many things.  A babysitter keeps kids safe and keeps kids out of trouble.   A babysitter keeps kids safe from each other, keeps the house safe from the kids.  A really good babysitter might help kids with their homework or help them have fun or even comfort them if they miss their mommy or daddy.  Kids can sometime develop strong bonds with their babysitters.  Yet no matter how good a babysitter is, they are only a temporary substitute for the parents.  Children want and need their parents. 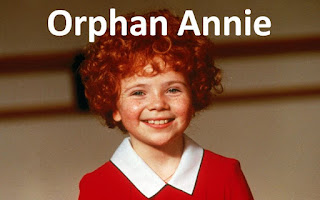 Christ Freed Us for Adoption as God's Children
There is another theme that Paul is teaching here.  There is the theme of adoption.  Before Christ, humanity was like an orphan with no spiritual Father.  Sin separated people from God.  They could not hear the voice of God's Spirit.   People were spiritual orphans.  The Law of the Old Testament serves like a babysitter in an orphanage to guard people who don't know Christ, to keep them out of trouble, to keep them safe, and keep them from hurting each other (or at least it tries).  But living in an orphanage is never the ideal, is it?  We want to be part of a family.
What do you think of when you think of an orphanage?  The United Methodist Children's Home started out as an orphanage for children who'd lost their parents and had no one else to care for them.  Millions of children and families have benefitted from their care.  Parentless children is an even tougher problem in other parts of the world.  The Chinese government says there are about 600,000 orphans in their country.  China is filled with orphanages with children wanting and needing to be adopted.
Whereas parents might hire a babysitter for a few hours, Orphans require guardians to watch over them 24 hours a day, 7 days a week.  A really good orphanage—like the UMCH—does their best to provide a safe, loving environment.  Unfortunately, even a good orphanage is a poor substitute for being part of a family.
Paul writes in Galatians 4:4-5 – “But when the right time came, God sent his Son, born of a woman, subject to the law.  God sent him to buy freedom for us who were slaves to the law, so that he could adopt us as his very own children.”  Isn’t that amazing!  All who place their faith in Jesus Christ have been adopted as God’s own children!
Now, I have known several families who have adopted children.  Some adoptions came through mixed families--through a marriage, step children were adopted into a new family.  Other times, children started out in a foster care situation that turned into a permanent adoptions.  Other times, people specifically went out seeking to adopt a child who needed a family.  Some families who adopt already had children of their own, but the glorious truth is the children they adopted are loved and cared for just as much as their natural born children.
Now if human parents—who are by nature flawed and imperfect—can love their adopted children just as much as their natural born kids, how much more can a perfect God love His adopted children—those who put their faith in Jesus Christ?  Isn’t it an amazing thought that God loves us just as much as He loves His Son Jesus?

Maybe It’s Time to Grow Up 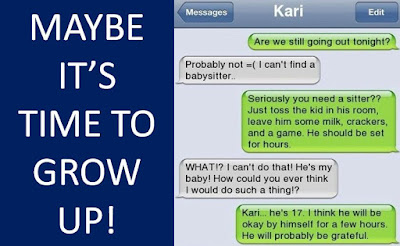 Young children need a guardian, a babysitter, to watch over them.  However, kids aren’t meant to stay children forever.  They are meant to grow up into mature adults who know right from wrong and choose to do the right thing.  Similarly, humanity was never meant to remain under the Law (our spiritual babysitter) forever.  We were meant to grow into mature spiritual beings.
Before Christ came, people needed a babysitter to keep us in line.  However now, because of Christ, we can grow and mature.  If we trust in Christ and seek to follow him as our Lord, we don’t need a babysitter to keep us safe anymore.  With God’s help, with the Holy Spirit’s help, we can know right from wrong and choose to do right.  We don’t need the Law to supervise us.  Everyone who put’s their faith in Jesus Christ has the Spirit of God living in them.  The Spirit guides us to do God’s will.  And so, now we can live—not as immature children who need a babysitter to keep them safe—but as mature adults who choose every day to follow Christ and love God and love our neighbor. 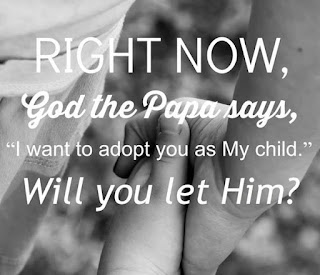 How do you need to respond today?
Maybe, you still feel like an orphan.  Maybe today, you would like to let God adopt you as His very own son or daughter—to know that God loves you just as much as He loves His only begotten Son, Jesus Christ.
Maybe today, you realize you are a Christian, but you need to grow up and mature in the faith.  Perhaps, you need to move beyond a faith that merely relies on rules and religion to babysit you and keep you out of trouble.  Maybe today, you need to realize Jesus set you free so you could follow the Holy Spirit and live as mature sons and daughters of God.
Maybe the Lord has spoken to you in another way.  I invite you to respond however the Spirit leads you.