Whose Side are You On? part 2 - Jesus 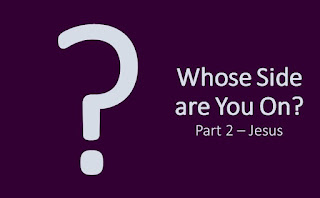 Introduction
When life is hard, we long for a Savior to come and rescue us.  We hold out hope amidst the darkness that somehow, someday our Savior will come.  But when He comes, will we recognize Him?  Will we receive Him?  Will we truly trust Him?  Will we know that He is not only our Savior, but our Lord?  Will we see He doesn’t come to be on our side, but rather, to invite us to be on His side?

Last week, we met a man from the Old Testament named Joshua who encountered the commander of the Lord’s army as Joshua and the Israelites prepared to attack the fortress, Jericho.  Joshua asked, “Are you on our side or on their side?”  The angel answered simply, “No.”  As if to say, “You aren’t even asking the right question.”  It is not that God is on our side or on someone else’s.  God is Yahweh, the great I AM.  He is who He is and we were made to worship and adore Him.  We are called to be on His side, for His side is always right and His side always wins in the end. 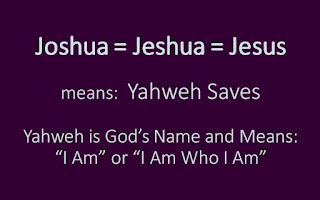 The name Joshua means, “God Saves”.  Today, we hear the story of another man poised to enter a different city.  This story is from the New Testament.  It is Jesus as he prepares to enter Jerusalem on the day we’ve come to call Palm Sunday.  Jesus is another way Jews said the name Joshua (kind of like we call some people John and other people Juan and others Jan).  But like Joshua, Jesus also means “God Saves”.  Listen to the story.

Matthew 21:1-13
As Jesus and the disciples approached Jerusalem, they came to the town of Bethphage on the Mount of Olives. Jesus sent two of them on ahead. 2 “Go into the village over there,” he said. “As soon as you enter it, you will see a donkey tied there, with its colt beside it. Untie them and bring them to me. 3 If anyone asks what you are doing, just say, ‘The Lord needs them,’ and he will immediately let you take them.”
4 This took place to fulfill the prophecy that said,
5 “Tell the people of Jerusalem,
‘Look, your King is coming to you.
He is humble, riding on a donkey—
riding on a donkey’s colt.’”
6 The two disciples did as Jesus commanded. 7 They brought the donkey and the colt to him and threw their garments over the colt, and he sat on it.
8 Most of the crowd spread their garments on the road ahead of him, and others cut branches from the trees and spread them on the road. 9 Jesus was in the center of the procession, and the people all around him were shouting,
“Praise God for the Son of David!
Blessings on the one who comes in the name of the Lord!
Praise God in highest heaven!
10 The entire city of Jerusalem was in an uproar as he entered. “Who is this?” they asked.
11 And the crowds replied, “It’s Jesus, the prophet from Nazareth in Galilee.”
12 Jesus entered the Temple and began to drive out all the people buying and selling animals for sacrifice. He knocked over the tables of the money changers and the chairs of those selling doves. 13 He said to them, “The Scriptures declare, ‘My Temple will be called a house of prayer,’ but you have turned it into a den of thieves!” 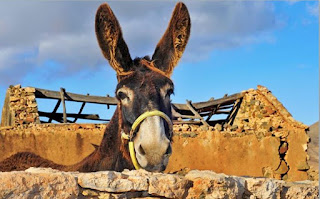 The Donkey
Just prior to entering Jerusalem, the Gospels tell the odd story of how Jesus sends his disciples to confiscate a donkey and it’s colt to ride into Jerusalem.  When bystanders see them untying the young donkey, they understandably concerned.  “Hey, why are you stealing that donkey?  That’s not yours!”  But the disciples say what Jesus told them to say, “The Lord needs it.”  Jesus is not just a prophet.  He is not just a Rabi or a preacher.  He is not just a healer or a kind man or an advocate for justice.  Jesus is not just a king.  Jesus is the King of kings and the Lord of lords.  He is the Son of God come to usher in the Kingdom of Heaven on earth.  When your Lord comes and says He needs your donkey, you yield.  And that’s what the bystanders did.

The Gospels of Mark and Luke tell us the colt had never been ridden before.  Now think about that for a minute.  If someone brought you a donkey and told you it had never, ever been ridden before, and then I said, “Alright, hop up on there and take him for a ride…”  I’d say, “You’re crazy.  I ain’t stupid.”  Unless you’re a rodeo cowboy, I don’t think most people would want to break their neck on some wild, untrained donkey.  But Jesus hops right up on it and the thing doesn’t buck and fight and kick.  Why?  Because John 1:1 says, “In the beginning the Word [Jesus] already existed.  The Word was with God, and the Word was God.”  When the Creator of the universe decides to ride into Jerusalem on an untrained donkey, one that's never been ridden before, even the dumb donkey knows you say, “Yes sir!” and give him the best ride he can give. 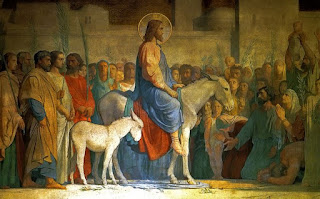 The People
And off Jesus goes, riding into Jerusalem.  And everyone is excited and cheering.  They’re waving palm branches, which was a sign of victory and peace.  They’re also spreading their clothes out across the road, which was a symbolic way of saying, “We submit to be ruled by you! Even if you walk all over us, we are your subjects and you are our king!  We'll do whatever you say!”  Everyone’s praising God and singing hosannas.  They’re Savior had come!  And they even called him king, but were they really willing to follow Jesus as their Lord?

Apparently not. Their actions over the next week show they didn't t really submit to the Son of God.  They wanted the Messiah to come be on their side.  They wanted Jesus to drive out the Romans and restore their glory so they could live their lives the way they wanted to live.  But Jesus comes in and starts by—not driving out the Romans—but cleanses Jerusalem’s own Temple--flipping over the money changers tables, driving out all the buyers and sellers, disrupting their way of life, saying "My Father's house is supposed to be a house of prayer,but you've turned it into a den of thieves!"

And then, through the whole next week, Jesus doesn’t do what the people wanted him to do.  They want a Savior to save them from the Romans.  But Jesus didn’t come to do what they want him to do.  Jesus came to do the will of God the Father, maker of heaven and earth.

The leading priests and elders starts asking, “By what authority are you doing all these things? Who gave you the right?” (Matthew 21:23)  Jesus finds the sinners, prostitutes, and tax collectors are more willing to accept his authority than the religious leaders.  Jesus says, the Kingdom of God is being taken away from the ruling authorities in Jerusalem and given to the weirdos, outcasts, and sinners who repent and accept the Savior as Lord.

The Pharisees and good people of Jerusalem want Jesus to defeat the heathen Romans so they don’t have to pay taxes and tributes to them anymore.  But instead, Jesus keeps showing the good people in Jerusalem they're not really any better than the heathen Romans.  In fact, in a lot of ways, the heathen Romans and the hated Samaritans are actually closer to the Kingdom of God than the good people of Jerusalem.  He preaches, “Everything [the religious leaders and Pharisees] do is for show.” (Matthew 23:5)  He says they are blind hypocrites heading for destruction and anyone who follows them will end up being destroyed with them.

Rather than rallying the troops to fight for Jerusalem, Jesus actually grieves over the city.  “O Jerusalem, Jerusalem, the city that kills the prophets and stones God’s messengers! How often I have wanted to gather your children together as a hen protects her chicks beneath her wings, but you wouldn’t let me.” (Matthew 23:37)

When the disciples marvel at all the incredible buildings and architecture in Jerusalem, Jesus tells them it’s all going to be destroyed.  “Not one stone will be left on top of another!” (Matthew 24:2)  And in the end, the Messiah would judge people not according to their position or possessions or power or where they live, but according to three things:


Jesus came to Jerusalem, riding on a donkey.  The people called him their messiah and king, but it was only lip service.  When he proved he would not do things their way, they turned their backs.  You see, for the people of Jerusalem, it was never really about following God.  God was a just a means to an end--their end.  They were never on God’s side.  They just wanted God to come be on their side so they could get what they want.

Jesus comes to each of us just like He came to Jerusalem.  We have the same decision to make.  Do want want Him to be on our side?  Or are we truly ready to be on His side?  Sure we all say we want to be on Jesus side, but then He starts tearing down the idols in our hearts and flipping over our way of living.  He challenges our sins and then I’m not so sure we might not want start crying out with everyone else in crowd on Good Friday, shouting “Crucify him! Crucify him!” Or we might be like his disciples who all abandoned him in fear and ran away.  Or we might be like Peter who boasted he would die for Jesus, but then denied even knowing him three times.  Or we might be like Judas who agreed to betray Jesus, hoping to get a better deal from someone else. We might do all these things.  We have done all these things at one time or another.  But who will truly recognize Jesus as Lord?