The Transforming Gift of Leadership 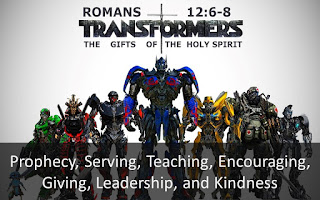 Introduction
The Transformers was one of my favorite cartoons and toys when I was a kid in the 80s.  Optimus Prime was the leader of the Autobots, the heroes of the story who fought for good and to protect the people of Earth.  Optimus Prime was a robot who could transform into a tractor trailer.  He was one of the strongest Transformers, but he was also a wise and noble leader who always put the good of others before his own.  I mention Optimus Prime's leadership, because I want to talk about the transforming spiritual gift of leadership today.

You see, when a person chooses to follow Jesus, the Holy Spirit gives them a special talent to serve in the Church and help transform the world.  Romans 12:6-8 teaches that some receive the gift of Prophecy, others the gifts of Serving, or Teaching, Encouraging, Giving, or Kindness.  But today, I want to talk about the spiritual gift of leadership.

I am an elder in the United Methodist Church.  That’s the technical term in the United Methodist Church for someone who has been fully trained, examined, approved, and ordained as a minister to lead a Methodist church.  It’s sort of ironic for me to think of myself as an elder.  On the one hand, my kids would agree; they think I’m old!  On the other hand, at 45, I’m still younger than most other United Methodist pastors.  Most United Methodist pastors are between 55-70 years old.  But the world elder to describe a Christian minster comes from the Greek word presbyteros used in the New Testament.  In the early New Testament Church, the leaders of various congregations were called presbyteros or elders.  They were people the Holy Spirit equipped with leadership.  Often, elders were older people with more experience.  But we also see examples of young people leading the church, like Timothy whom the Holy Spirit equipped to be an elder in the Church.  So age is not what’s critical for leadership.  What’s important is the gift of the Holy Spirit.  Listen to the Word of God.

1 Peter 5:1-4
1And now, a word to you who are elders in the churches. I, too, am an elder and a witness to the sufferings of Christ. And I, too, will share in his glory when he is revealed to the whole world. As a fellow elder, I appeal to you: 2 Care for the flock that God has entrusted to you. Watch over it willingly, not grudgingly—not for what you will get out of it, but because you are eager to serve God. 3 Don’t lord it over the people assigned to your care, but lead them by your own good example. 4 And when the Great Shepherd appears, you will receive a crown of never-ending glory and honor. 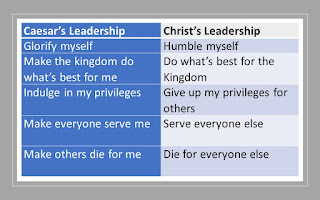 Immediately we see some important aspects of Holy Spirit inspired Christian leadership that set it apart from worldly leadership.  In the ancient world during New Testament times, world leaders were very different from Christian leaders.  Caesar, the emperor of Rome, was the ultimate example of a non-Christian leader.  Caesar lorded his position over everyone in his kingdom.  His power led him to think he was a god and that everyone was put on earth to serve him.  Caesar even expected people to die for him; sometimes for frivolous reasons.  Gladiators in the Roman Colosseum were forced to fight each other to the death for the amusement of the Caesar.  People obeyed Caesar out of fear of death.  Now let’s contrast leadership in Caesar’s kingdom to the leadership of Jesus in the Kingdom of God.

In God’s Kingdom, Jesus is Lord.  He is the King of kings and Lord of lords.  John 1:2-5 tells us, “[Jesus] existed in the beginning with God.  God created everything through him, and nothing was created except through him.  [Jesus] gave life to everything that was created, and his life brought light to everyone.  The light shines in the darkness, and the darkness can never extinguish it.”  If anyone is worthy of worship, honor, total devotion, and absolute obedience, it is Jesus (not Caesar).  And yet, Jesus did not use his position to “lord it over” his people the way Caesar did.  Instead, Philippians 2:6-8 tells us “Though he was God, he did not think of equality with God as something to cling to.  Instead, he gave up his divine privileges; he took the humble position of a slave and was born as a human being.  When he appeared in human form, he humbled himself in obedience to God and died a criminal’s death on a cross.” 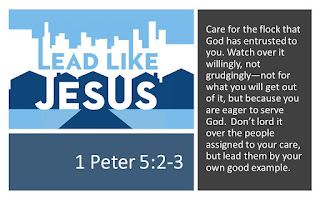 If you are a Christian, you are leading someone.  So, we all have a flock (so to speak), whether it is our kids, grand kids, our friends, our coworkers, or our neighbors.  As 1 Peter 5:2-3 says, “Care for the flock that God has entrusted to you. Watch over it willingly, not grudgingly—not for what you will get out of it, but because you are eager to serve God. 3 Don’t lord it over the people assigned to your care, but lead them by your own good example. 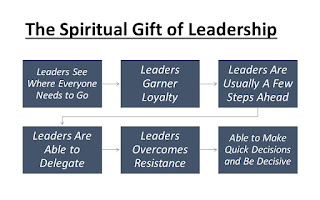 The Spiritual Gift of Leadership
The Holy Spirit gives some people the special ability to lead.  God has always used special leaders to guide His people.  He used Joseph to save his family and the Egyptians from starvation during a 7-year famine.  Then, God used Moses to lead His people out of slavery in Egypt.  And God used Joshua to lead His people into the Promised Land.  Without godly leaders the masses would not get anything done.  Just like in these Old Testament stories, the Holy Spirit of God raises up leaders today to lead in the Church.  Could leadership be your spiritual gift?  Well, let’s see.  Here are some traits of leaders.  Do you have any of these?

Leaders See Where Everyone Needs to Go – God gives leaders a vision for where He wants His people to go and enables those leaders to get people to follow them there.  Think of Moses.  He was just out in the wilderness tending a flock of sheep and he saw a burning bush.  God spoke from the bush and told Moses, "Go lead my people out of slavery in Egypt to the Promised Land."  You might not think you are a leader.  You might say, "I'm not a leader!  I can't do that!  No one would listen to me!  Besides, I no good a getting in front of people and talking!"  Funny, that's exactly what Moses said.  And we all know he was a leader.  He led the Israelites out of slavery in Egypt!  So maybe you are a leader, if you see where everyone needs to go and feel God calling to you to lead them there.

Leaders Garner Loyalty – You can’t lead if no one will follow.  Someone with the spiritual gift of leadership earns people’s respect, trust, and loyalty.  Do people listen to your opinion and want to follow you?  Do you know how to garner their respect?  Then you’re probably a leader.  Now, be careful to love the people and build their loyalty, because they might have to follow you through some difficult terrain.  There may come times where they question why they are still following you because they don't understand.  So build their trust now and it will pay off later.

Leaders Are Usually A Few Steps Ahead – Imagine a tour group led through a museum by a tour guide.  The tour guide is probably walking a few steps ahead to show everyone where to go.  The guide is leading the group.  Leaders are usually out in front showing the way.  They have seen where everyone needs to go and now they are showing the way.  Therefore, leaders are usually the first ones to arrive and an event.  They may also be the last ones to leave, because they're making sure no one get's left behind.

Leaders Are Able to Delegate – It’s impossible for leaders to do everything that needs to be done.  It’s not that a leader thinks they are too good to do something.  There’s just too much to do and the leader has other things to do that only the leader can do.  A good leader knows they need help and also knows the people they lead need to be involved.  So a gifted leader learns what are people’s abilities and plugs them in in the right ways.  Giving people something to do helps everyone move forward and be more effective and develops each individual’s abilities.  It even raises up new leaders within the team.

Leaders Overcomes Resistance – Most people just want to remain comfortable, right where they are now.  They are wary of change and afraid of the unknown.  If a leader is doing their job, they are probably leading people out of their comfort zones toward a new and better place, but that doesn’t mean people will go willingly at first.  They will resist.  And there may also be resistance up ahead from the forces of darkness that don’t want God’s people to be on the move.  So a leader has find strength from God to overcome resistance from within and without in order to lead God’s people forward.

Leaders Are Able to Make Quick Decisions and Be Decisive – Sometimes, there is time to sit and ponder a decision and some very important decisions require a lot of time and study.  However, the pace of leading God’s people is often so fast that there just isn’t time to agonize over every minor detail for a long time.  Leaders always follow God's leading and know when it is important to go slow and when to make a quick decision and move fast.  A leader surrounds themselves with lots of wise and conscientious people and listens to good advice.  In the end, the leader makes a decisive decision and loyal people follow them wherever God is leading them.

Is God calling you to lead?  If He calls you to lead, the Holy Spirit with supernaturally enable you to lead.  Don't neglect the gift of the Holy Spirit within you.  Be faithful.  "Care for the flock that God has entrusted to you. Watch over it willingly, not grudgingly—not for what you will get out of it, but because you are eager to serve God.  Don’t lord it over the people assigned to your care, but lead them by your own good example.  And when the Great Shepherd appears, you will receive a crown of never-ending glory and honor." (1 Peter 5:2-4)

A Prayer for Godly Leaders
"Lord, God Almighty, lead us forward.  Raise up godly leaders among your people to guide us where you want us to go.  There are many among us who are afraid to lead or don't know or think they can.  Fill them with Your Holy Spirit to impart the gift of leadership.  Help them to trust You, to follow you, and so to lead the ones You have placed in their care.  That Your Name may be glorified and Your Kingdom may come on earth as it is in heaven.  Amen." 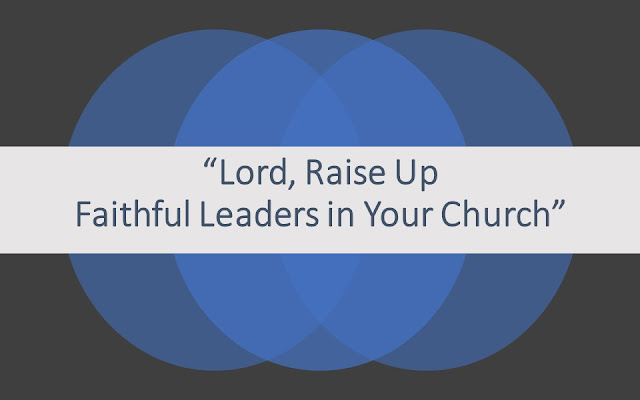