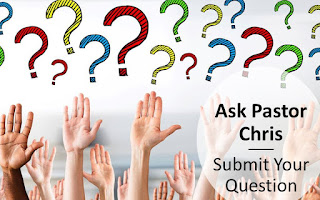 Romans 12:2
Don’t copy the behavior and customs of this world, but let God transform you into a new person by changing the way you think. Then you will learn to know God’s will for you, which is good and pleasing and perfect.

Introduction
CLICK HERE TO LISTEN TO THE PODCAST
A Christian is a person for whom Jesus Christ is Lord of all.  In the Methodist Church, we begin our Christian life with a profession of faith, where we promise to follow Jesus Christ as Lord—to obey Him, follow Him, and live after His example.  If you are already a Christian, I want to remind you of the promises you've made.  If you have never made a promise to follow Jesus Christ, I invite you to make that promise right now.  Here is our profession of faith:

The Christian Profession of Faith
Pastor: On behalf of the whole Church, I ask you:
Do you renounce the spiritual forces of wickedness,
reject the evil powers of this world,
and repent of your sin?

Pastor: Do you accept the freedom and power God gives you
to resist evil, injustice, and oppression
in whatever forms they present themselves?

Pastor: Do you confess Jesus Christ as your Savior,
put your whole trust in his grace,
and promise to serve him as your Lord,
in union with the Church which Christ has opened
to people of all ages, nations, and races?

If you made these promises for the first time today and if they are the true desire of your heart, then I 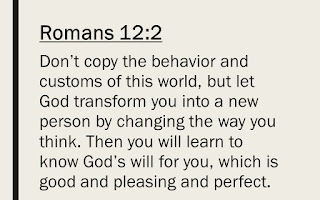 congratulate you.  You have become a Christian today!  Jesus Christ is your Lord and He saves you from your sin.  If you truly follow Him as your Lord, you will inherit eternal life; you will be with Jesus in paradise for all eternity.  Your sins are forgiven and will not be counted against you!  Hallelujah!

Over the past several weeks, I've been answering questions people submitted to me.  I have one final question to address in this series. 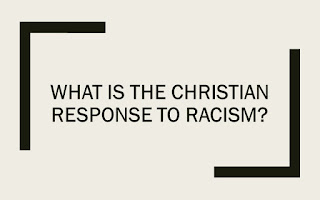 What is the Christian response to racism?
According to the Anti-defamation League (ADL.org), "Racism is the belief that a particular race is superior or inferior to another, that a person’s social and moral traits are predetermined by his or her inborn biological characteristics. Racial separatism is the belief, most of the time based on racism, that different races should remain segregated and apart from one another."

According to Christianity, racism is a consequence of sin in a fallen world.  The consequences are terrible.  They hurt people and our communities.  Christian minister and civil rights champion, the Rev. Martin Luther King, Jr., taught that racism is just as damaging to the racist person as it is to the people they oppress.  King fought to liberate—not only blacks who suffered discrimination, but also—white supremists who were trapped in a wrong way of thinking. 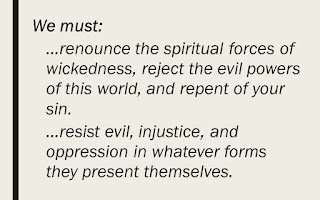 The short answer to the question today is this, it’s what we promise to do in our Christian profession of faith: We must renounce the spiritual forces of wickedness, reject the evil powers of this world, and repent of your sin.  We must resist evil, injustice, and oppression in whatever forms they present themselves.

Satan is a liar and the father of lies.  We’ve been lied to.  The Christian website Answers in Genesis says, “Because of our culture’s racist roots, because of the way the world thinks, because of the influence of Darwinian thinking, we have been programmed to look at the exterior rather than the interior of a person, and to make broad judgments based on what we see.” [i]
We see a black man and we judge his character based on the color of his skin.  We see an Asian woman or a Latino person and we make judgments about their personality based solely on the way they look or the language they speak.  And it’s ludicrous.

In the past, some have even tried to use the Bible to justify their own racist behavior.  However, there is no credible way to show that the Bible condones racism or the idea that one race is superior to another.  On the contrary, what the Bible clearly teaches is:

What the Bible Teaches About Racism
The Bible teaches there is only one biological race. 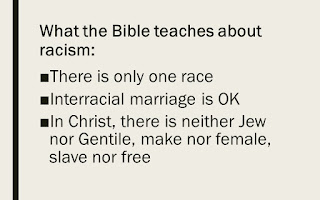 “All humans are descended from Adam and Eve and so all are related and need the salvation offered by the Last Adam, Jesus. From a biblical perspective, there is one biological race. This is confirmed by scientific studies on the human genome. Biblically and scientifically there is no defense [for] racism.”[ii]

The real differences between “races” is cultural, not genetic. Matches for organ transplants are just a likely between whites and blacks as they are between whites and whites. So the differences we see are literally only skin deep. It is sin and evil that causes people to judge other people by the appearance of their skin instead of the content of their character. Racism is a shallow and corrupt way of thinking and the Christian should have nothing to do with it. We must reject this evil and resist it whenever we see it.

Many godly people in the Old Testament were outsiders to the Jewish people. Moses had an interracial marriage. He was Hebrew and his wife, Zipporah, was a Midianite. Rahab and Ruth were foreign gentiles who interracially married into God’s people and were so notable they were included in Jesus’ genealogy. If it was good enough for Jesus’ family tree, how can anyone argue with it? (Ruth had an whole book of the Bible named after her and her husband, Boaz was considered a righteous man!)

The New Testament does not counsel against interracial marriage either. The only kind of marriage Bible counsels against is marriages between believers and nonbelievers.  2 Corinthians 6:14-15 says, “Don’t team up with those who are unbelievers. How can righteousness be a partner with wickedness? How can light live with darkness? What harmony can there be between Christ and the devil? How can a believer be a partner with an unbeliever?”

However, among many Christians today, we fund unequally yoked marriage is very common.  Christians often choose to marry unbelievers.  Today and in the past, interracial marriage was frowned upon by many while inter-faith marriage was much more acceptable even though the Bible is clear there is no problem with interracial marriage, but inter-faith marriage is strongly discouraged.  And this reveals the racism within our culture.

Which marriage are you more concerned about: Interracial marriage or unequally yoked marriage?

The Bible says in Christ, there is neither Jew nor Gentile, make nor female, slave nor free.
Colossians 3:11 says, “In this new life, it doesn’t matter if you are a Jew or a Gentile, circumcised or uncircumcised, barbaric, uncivilized, slave, or free. Christ is all that matters, and he lives in all of us.”
I.E. it doesn't matter what country you're from or what ethnicity you are. If you are a Christian, we are brothers and sisters in Christ.

How should Christians respond to racism?
Let the Word of God’s change the way you think. 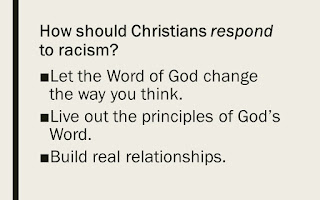 We need to reject the corrupt ideas of this world--including the wrong ideas we’ve inherited--and assimilate God’s ideas in His Word. We are all brothers and sisters. There is no more “Jew or Gentile, Male or Female”. Our affiliation in Christ far outweighs any differences in skin color, culture, nationality, and even gender.

Live out the Principles of God’s Word.
James 1:22 says, “Don’t just listen to God’s word. You must do what it says. Otherwise, you are only fooling yourselves.” Christians need to take God’s Word to heart and live by God’s standards, not the world’s lies. We must love our neighbors the way God loves them.

The Christian's response--your personal response--needs to be real and not just words.  People like to watch news stories on TV and get all worked up.  But this has hardly anything to do with real life.  Mostly, it becomes an excuse to confine your personal response to racism to the intellectual/theoretical realm.  Why do people care so much about what protesters are doing in New York City if we don’t even really know someone of a different race right here in our own town?  I say turn off CNN (and turn of Fox News too).  Those channels are just huge money-making corporations interested in selling you a product to earn money.  All they’re peddling is gossip and sensationalism and anger and sentimentalism.  We “buy” their product; they make a lot of money.  And little to nothing productive gets accomplished.  They make us feel like we are informed and know it all.  But in reality, all they do is distract us from real life and fill us with anger and resentment.

If you really wan to make a difference, then build some real relationships with people who look different than you.  Reach out to people in the Hispanic, Black, or Asian community.  Befriend your neighbor who is from a foreign country.  We need to become friends and neighbors.  We need to build real trust and confide in each other.  This is where real reconciliation and healing take place.

God’s Questions for You
Now that I've taken time to answer your question, God has some questions for you.

Do you truly renounce the spiritual forces of wickedness, reject the evil powers of this world, and repent of your sin?

Do you accept the freedom and power God gives you to resist evil, injustice, and oppression in whatever forms they present themselves?

Do you confess Jesus Christ as your Savior, put your whole trust in his grace, and promise to serve him as your Lord, in union with the Church which Christ has opened to people of all ages, nations, and races?

Are your answers to these questions just ideas and empty words? Or are you ready to really live by them? 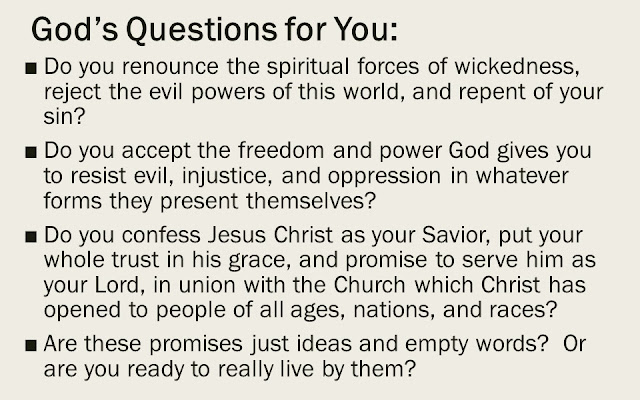