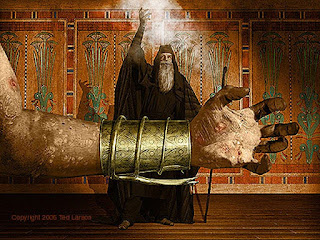 Exodus 9:8-12
8 Then the Lord said to Moses and Aaron, “Take handfuls of soot from a brick kiln, and have Moses toss it into the air while Pharaoh watches. 9 The ashes will spread like fine dust over the whole land of Egypt, causing festering boils to break out on people and animals throughout the land.”

10 So they took soot from a brick kiln and went and stood before Pharaoh. As Pharaoh watched, Moses threw the soot into the air, and boils broke out on people and animals alike. 11 Even the magicians were unable to stand before Moses, because the boils had broken out on them and all the Egyptians. 12 But the Lord hardened Pharaoh’s heart, and just as the Lord had predicted to Moses, Pharaoh refused to listen. 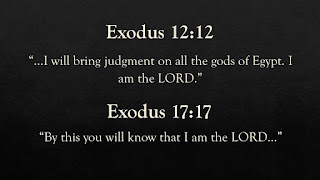 God used all these plagues to prove to Pharaoh and Egypt and everyone there is only one God, Yahweh, the Great I Am, Lord of all.  For He said in Exodus 12:12, “…I will bring judgment on all the gods of Egypt. I am the Lord.” And in Exodus 17:17 He said, “By this you will know that I am the Lord…” 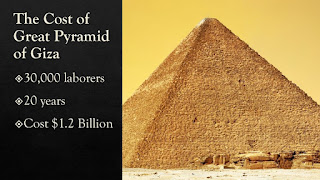 Ancient Egypt was a great civilization that lasted some 3,000 years.  One of the ways they demonstrated their greatness was by building impressive monuments.  Each successive Pharaoh was pressured to build bigger and better structures to demonstrate they were greater than the Pharaoh’s who came before them.  This heavy burden forced Pharaoh’s to marshal all the empire's resources and tens of thousands of laborers and slaves to construct remarkable tombs to glorify their legacy.

In order for build the Great Pyramid of Giza, it took about 30,000 people 20 years at a cost of $1.2 billion dollars (by today's standards).  Do you know which Pharaoh built the Great Pyramid of Giza?  Me either.  You would think for $1.2 billion we would know.  But the vast majority of the world doesn’t really care.  (By the way, I Googled it and it was Pharaoh Hemiunu.) 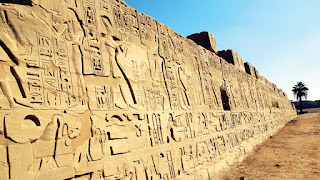 An Empire of Idols
Egypt believed in thousands of gods and goddesses, of which Pharaoh was the earthly representative.  I can't imagine the pressure it puts on a person live up to people's expectations that you are a god.  I can't imagine the pressure Pharaoh felt because he actually believed he was a god, knowing all his own flaws.  That was the lie with which they deluded themselves.
And because life is unpredictable—and life in the ancient world was incredibly unpredictable—the Egyptians believed gods could bless them one day and curse them the next.  And so, the Egyptians sought to appease and control their deities through sacrifices and magical incantations. Much of the mysterious writing with which the Egyptians decorated their buildings were magical spells intended to ward off evil spirits and enlist the help of benevolent ones.

Among the thousands of Egyptian Gods, one important goddess was Sekhmet, the goddess of war and healing.  “She is depicted as a lioness. She was seen as the protector of the pharaohs and led them in warfare. Upon death, Sekhmet continued to protect them, bearing them to the afterlife.”[i]  But Sekhmet was powerless to help when Moses reached into the brick kiln for a handful of dust.

Do you remember how Pharaoh forced the Israelites to make bricks to build his temples and tombs?  Now God has Moses use the ashes from the brick kilns to afflict the Egyptians with festering boils.  Boils broke out all over the Egyptians, but not a single Israelite was affected.  Can you imagine the horror and humiliation for Egyptians as they suffered while they saw their slaves--the Hebrews the viewed as less than human--being spared.  Even Pharaoh's magicians were covered from head to foot with the awful misery.  And where was the protection and healing of the Egyptian goddess?  She has no power to stop Yahweh.

What are our gods today?  According to Timothy Keller in his book, Counterfeit Gods, an idol is “anything more important to you than God, anything that absorbs your heart and imagination more than God, and anything that you seek to give you what only God can give.” 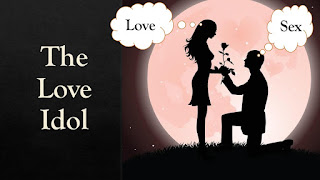 The Love Idol
According to the Beatles, “All you need is love.”  God made us for love and to love and there is a deep longing for it in every human heart.  Unfortunately, instead of finding love in God and healthy human relationships, we usually turn love into an idol where sex and romance takes the place of God in our hearts.  These are such important idols in our culture we don’t even see them as idols.  In fact, I may get in trouble just for trying to expose them as a myth.  (Nobody likes it when you smash their idol.)

The general myth of love in our culture right now is portrayed in a thousand movies and love songs.  It’s a powerful myth.  We sing the love songs and believe the lies, even though we know they’re unrealistic.  We watch the movies with teary eyes and a yearning in our soul.  The myth is imbedded in our worldview.  The details for each story are different, but it generally goes something like this.

A little girl begins dreaming from an early age that, one day, she will have a beautiful wedding to celebrate her ultimate achievement—finding true love.  For out there, somewhere, is the man created just for her—her soulmate—the one who will fulfill her deepest needs.  He will be tall, dark, and handsome. (Ladies, you can insert whatever physical traits you prefer here because they aren’t as important as what how the man acts.)  The girls greatest dream is that she will find her one true love and he will fall madly in love with her.  He will get down on one knee and propose ini the most romantic way.  They will have the beautiful wedding of her dreams and spend the rest of their lives together.  He will cherish her and give her everything she needs.  They will have kids and he will take care of her and their family.  And they will live happily ever after.  Now all you have to do is fill in the details a bit and expand the story and you have the makings for a romantic comedy that could make millions on the silver screen.  You’re welcome.

Men have a slightly different love myth, but it pairs well with the feminine myth.  Men grow up believing that somewhere, there is a woman so incredibly attractive he will know “she’s the one” as soon as he sees her.  He will be so smitten he will do anything to win her love.  She will be everything he’s ever wanted in a girl.  Because of her, he won’t even want to look at another woman.  Sex with her will be so amazing he will be in heaven!  Therefore, he will gladly dedicate his life to making her happy and she will cherish him as her provider and protector and hero.  He will sacrifice anything for her because life without her would be meaningless.

It’s just harmless stuff right?  Except, that somewhere deep down we believe this stuff.  The fact is, there is no man or woman out there that can live up to the myth we’ve made up in our minds.  Tragically, this kind of thinking actually hinders true love.  Love is not what another person does for you.  Love is what you do for others.  Love is sacrificial.  It’s not about how the other person makes you feel or what they do for you.  Love is giving without expecting anything.

1 Corinthians 13:4-7 tells us the characteristics of true love.  "Love is patient and kind. Love is not jealous or boastful or proud or rude. It does not demand its own way. It is not irritable, and it keeps no record of being wronged. It does not rejoice about injustice but rejoices whenever the truth wins out. Love never gives up, never loses faith, is always hopeful, and endures through every circumstance."  Real love is Jesus dying on the cross for sinful humanity.  In fact, the Bible says Jesus dying on the cross is the example of love between a husband and wife.  Which image do you trust?  The popular image of love portrayed in our society or the image of love God give us in His Word? 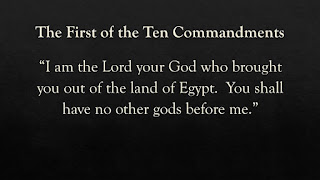 Conclusion
The very first of the 10 commandments from Exodus 20 says, “I am the Lord your God who brought you out of the land of Egypt.  You shall have no other gods before me.”

This commandment lays the ground work for all the other laws and commandments God gave us.  Why is it so important that we worship only God?  Some complain God is jealous and egotistical.  That's not true.  God is actually selfless.  He is thinking of us as He gives these commands.  If you have any other gods, you will not be able to love God and you will not be able to experience God's love for you in its fullness.

When we cut God out of first place in our heart, we create a huge hole that nothing else can fill.  Our deepest desire is love—and it’s the only kind of love God is able to give. So many of the love songs and love stories we cherish, we cherish because they portray an idealized love that only God can give.  Unfortunately, when we seek that love from mere mortals, they will not be up to the task and we will be woefully disappointed.  Meanwhile expecting that love from people cuts us off from the true source of perfect love—Almighty God.

It is not that God is spiteful and refuses to love us if we don’t love someone else besides Him. No.  It's amazing that He still loves us despite our unfaithfulness.  Perhaps an illustration will help.  Suppose you are married and you cheat on your spouse.  You have damaged the relationship terribly.  Even if your spouse stays with you, there will be an offense in your psyche that hinders your relationship.  This illustrates our condition with God.  We have broken that relationship with our sin.  Every time we turn to an idol, we are cheating on God—chasing after fulfilment in some fantasy that can never deliver what it promises.  We chase this fantasy until discover it is an illusion.  Then we either settle for the disappointing illusion or we chase after a new fantasy, ending with the same results again.  All the while, our One True Love is watching, heart breaking, as He see--not only our betrayal and unfaithfulness, but also knows with His all-knowing wisdom that--we are inflicting wound upon wound on our own souls.

And so, God came as Jesus came and lived among us.  He is the perfect representation of true love.  It is not that we love him, but He loved us.  While we were still sinners, Christ came and died for us.  He has made a way for us to come back to God.

Won’t you repent of your sins and turn to God?

Stop believing the lie that there is some person out there who's love is going to "complete you".  Only God, thru Christ, can complete you.  And when you trust Him, He will save you and teach you to love others--maybe even someone you could marry and spend the rest of your life with.  Even if you remain single your whole life, you will still be completely complete because in Christ you have everything you truly need.