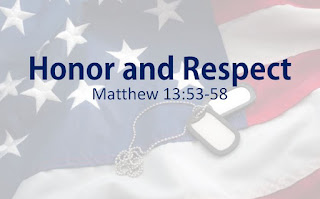 Introduction
I got to see my daughter, Grace, march in the Veterans Day parade in downtown Dalton with the Coahulla Creek High School Marching Band Saturday.  They did great.  We stood about three quarters of the way toward the end of the parade route waiting for the procession to make its way to us.  As we waited, a reporter from the Dalton Daily Citizen came by ask why we were at the parade.  I said it was to see my daughter in the band, but it was more than that.  I think it is important for the community to come together to do something big to show honor to those who serve our country.  Americans are blessed with peace, prosperity, and relative security, but these don't just happen by accident.  Many people sacrifice to ensure the blessings we enjoy.  It's important for us to honor them.
This blog will consider the meaning of honor and respect and encourage you to have them in greater measure.  Let's look together at a time when Jesus--the Son of God, the Lord of lords and King of kings--was not given the honor and respect due to him.

53 When Jesus had finished telling these stories and illustrations, he left that part of the country. 54 He returned to Nazareth, his hometown. When he taught there in the synagogue, everyone was amazed and said, “Where does he get this wisdom and the power to do miracles?” 55 Then they scoffed, “He’s just the carpenter’s son, and we know Mary, his mother, and his brothers—James, Joseph, Simon, and Judas. 56 All his sisters live right here among us. Where did he learn all these things?” 57 And they were deeply offended and refused to believe in him.

Then Jesus told them, “A prophet is honored everywhere except in his own hometown and among his own family.” 58 And so he did only a few miracles there because of their unbelief. 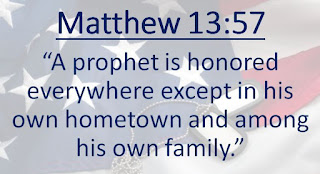 The Hometown Disadvantage
Normally, when a football team plays in their own hometown, you would say they have a the hometown advantage.  Everyone from their hometown is there to root for them and it gives the home team a certain boost.  Unfortunately, Jesus found the opposite in Nazareth.  You might say he suffered from a hometown "disadvantage".  Jesus was dishonored and disrespected in his own hometown.  Those who knew him best, wouldn’t accept or honor him.
People are often enamored by the novelty of the novel and take for granted the familiar.  They may listen to someone they don’t know—a teacher, a preacher, an author, a celebrity—just because they are different.  At the same time, they may dismiss the counsel of someone they know, because they know their faults and shortcomings and the things about them that get on their nerves.
Veterans go off to serve, maybe even to fight, and they learn things like discipline, honor, respect, and wisdom.  They may come home with more life experience and maturity, but their hometown friends and family still see them the way they were before.
The people of Jesus’ hometown were amazed.  Jesus' teaching was obviously full of wisdom and power; but instead of honoring Jesus, they scoffed.  They couldn't accept that the hometown boy they watched grow up could be anything more than "the carpenter's son".
The book of Proverbs was written to teach wisdom.  I've been studying it since this past summer.  The word scoff comes up again and again in the book of Proverbs.  It is sometimes translated as scorn or mock.  All these words are related and come from a Hebrew root word that means "to make faces at."  Imagine two little kids arguing with each other and they don't know what words to use anymore so they just start making faces at each other.  That's the essence of scorn.
Proverbs 15:12 says, “Mockers hate to be corrected, so they stay away from the wise.”  Scoffing and mocking and scorn are ways to dismiss or deflect something that makes you uncomfortable or that you don’t want to accept.  The people of Nazareth scorned Jesus because they couldn't accept that he was anything more than "the carpenters son."  Where did he get all his wisdom?  Where did he get his power?  What are all these stories about miracles he'd performed?  He didn't go to college or seminary.  He didn't learn from the best rabbis in the land.  And yet, Jesus' teaching was full of power.  So instead of accepting something they couldn't understand or that made them uncomfortable or didn't fit in their worldview, they scorned him.  Sadly, they missed out on the wisdom and miraculous power and redemption Jesus had to offer.
Scoffing and scorn hurts you as much or more than anyone else.  It's so much better to offer honor and respect.  So let's look at what it means to honor and respect.

Honor means to value, to prize, to consider very valuable.  Honor is something you do because of who a person is or what they represent.  For instance, the 10 Commandments tell us, "Honor your father and mother."  So you honor your parents because it is a command of God.  You look for ways to show them honor.  You listen, you obey, you do nice things for them.  Even if your parents haven't always acted honorably, you can honor the position. Your honor as a gift you give and it doesn't require people to earn it.
And here's the thing:  when we honor people, they tend to live up to our honor.  I am always humbled when people show me honor because I am a pastor.  I am humbled because I don't feel worthy of the honor.  Yet, it always inspires me to try to live up to the honor someone has afforded me.
Jesus hometown did not honor him because they didn’t accept his position.  Rather than seeing him as the Son of God (or even as a prophet), they only saw him as someone who was not highly educated, who had no credentials, and was a nobody.  To them, Jesus was just a “carpenter's son.”  The people of Nazareth refused to honor Jesus, even as a gift.  They rejected Christ to their own detriment. They missed out.

Respect is related to honor, but it is not the same.  Respect means to admire (someone or something) as a result of their abilities, qualities, or achievements.  We honor regardless of someone’s abilities or achievements; it is a gift we give.  Respect is merit based.  Respect is earned.
Now you can still respect someone just because of the position they hold.  If a police officer pulls you over while you are driving, please respect them.  Even if you don't know the person, respect the badge; it is a symbol of the danger they put themselves in for the sake of the community.  The badge of an officer has earned the right to be respected.  We respect police officers, soldiers, judges parents, elders, because each of these titles has earned the right to be respected.
You may respect someone initially just because of their positio , but that only goes so far.  True respect, deep respect, is something people earn when they prove they are worthy of respect.  If you are in a position of authority, you ought to act in way worthy of respect.  True authority is not something you have to wield; it is something people grant to you willingly when they respect you.
Fathers, husbands, do you want your children and wives to respect you?  Then act respectably; prove you are worthy of respect.  Leaders act respectably.  Mothers, wives, women, men, children act in ways that earn respect and you will likely be more respected. 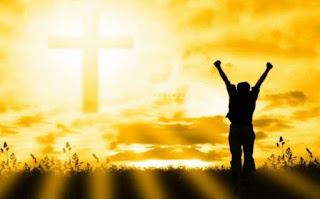 Conclusion
Our world needs less scoffing and mocking and sarcasm and more honor and respect.  Who can you honor and how?  How can you show respect?  Look for ways to show honor and respect.  Live honorably and respectfully.  Romans 12:10 says, "Outdo one another in showing honor." (ESV)
Let me end with this question.  Who is Jesus to you?  To the people Nazareth, he was nobody worthy of honor.  But who is he to you?  Was he just "the carpenters son?"  Was he an influential teacher, religious leader, or a prophet?  Or is Jesus the son of God, the Lord of lords, the King of Kings?
Proverbs 1:7 says, "The fear of the Lord" [i.e. the deep reverence, honor, and respect the Lord] "is the beginning of wisdom."  I suggest Jesus is the Lord.  He came to earth to show us the way to live.  He died on the cross to satisfy the cost of our sins.  He rose from the grave on the third day because he has power of sin and death.  And he ascended to Heaven because he is Lord of all.  There are many on earth who are worthy of respect and we honor all that we can, but only Jesus is worthy of worship.
What then should we do?  We should fall on our faces before him and submit completely to him.  We should surrender all and let Jesus be Lord of our life.  We respect Jesus for what he did, but even more for who he is.  Thankfully, he loves us perfectly and knows exactly what we need and beckons us to come receive blessings and honor and glory right alongside him.  Isn't that amazing?  I hope you will turn to the Lord with respect and honor and worship him today and every day.

Posted by Pastor Chris Mullis at 11:27:00 AM No comments: Links to this post