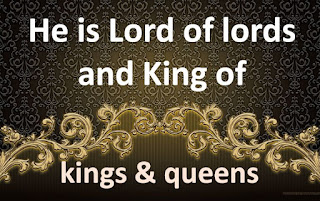 Introduction
A scientist had a meeting with God and said, "God, we can now make clones and create human life and I think we can take care of ourselves and don't need you anymore."  God said, "OK, but before you go, let's have a contest to see who can make a human out of dirt the fastest."  The scientist looked down at the dirt and grabbed a handful and said, "OK, let's do it."  But God said, "No.  You go get your own dirt."

God spoke and the whole universe was created.  He made everything we see (and even what we can't see).  That's why God owns it all and is Master of it all.  Our relationship with God is not a democracy.  We don't get to vote on whether He rules.  He rules because he owns it.  And you can't move to the moon if you don't like it, because God owns that too.

All throughout the Bible, God is called Lord.  We don't use that word much today in America, because we live in a democracy.  A lord is one having power & authority over others because they own the property and/or are superior to all others.  God is Lord because He owns it all--including you and me.  Furthermore, God is superior to all others; there is no one better qualified to rule.

A king rules, but also has the right to appoint others to rule with him.  Today, I want to discuss how God--the King of kings and Lord of lords--chooses special people to be kings and queens in His Kingdom.

8“He is the stone that makes people stumble, the rock that makes them fall.”
They stumble because they do not obey God’s word, and so they meet the fate that was planned for them.  9 But you are not like that, for you are a chosen people. You are royal priests, a holy nation, God’s very own possession. As a result, you can show others the goodness of God, for he called you out of the darkness into his wonderful light. 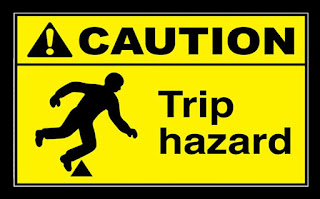 The Stumbling Block and a Chosen People

The other day, I came in from the garage to wash my hands in the basement bathroom.  I've walked down that hallway a million times and could easily do it with my eyes closed.  That's why it didn't bother me that the lights were off and I had to walk walk down the hall in the dark.  So I was walking along in my own little world not paying much attention, when bam!  I tripped over something.  Someone had left a book bag in the middle of the hallway floor.  You don't expect there to be a stumbling block like that in your pathway.  Who leaves a book bag in the middle of the hallway?
That's how Jesus came into our world.  1 Peter 2:8 says Jesus is a stone that makes people stumble..."  He caused the Roman Empire to stumble 2,000 years ago.  They were going along thinking everything was fine. They thought, “We rule the world! No one can stop us!"  Caesar thought he was a god and owned the whole world.  And then Jesus, the Son of God, came and showed everyone different.  The Jewish religious leaders of Jesus' day thought, “We are better than everyone else!” The Pharisees tried to prove they were holier than everyone else by follow the absolute letter of God's Law in the Torah.  They thought their righteousness would earn God's favor and bring about the reign of the Messiah.  And yet, when Jesus, the Messiah, actually came, they rejected him.  He was their stumbling block too.  Jesus is a stumbling block for people today as well.  People today try to live their life the way they want without any regard to God's will; they indulge their own selfish ambitions, but Jesus trips them up.

Throughout history and even today, people stumble because they “do not obey God’s word.” (vs. 8) What is God’s Word?  Some say that God's Word is the Bible.  The Bible is God's Word, but people can use the Bible to say anything they want.  (The Pharisees tried to use God's Word to reject Jesus Christ, the Son of God.)  Jesus is God's Word.  However, few people really know who Jesus is and what he actually said and taught.  Many people today want to make Jesus into some mythical figure who loved everybody and carried around baby lambs everywhere; but they never look into the Bible to see who Jesus, the Word of God, really is and what he taught.

We find God’s True Word when we go to the Bible to see Jesus.  You can't just use the Bible to justify your actions or as a weapon against other people.  You have to read the Bible while listening obediently to what God says through Jesus Christ.  You have to humble yourself.  Jesus’ true followers hear and obey God’s Word.  1 Peter 2:9 says those who hear and obey God’s Word are special.

But there's more.  We are special because we are a holy nation.  Together, all the followers of Christ are God’s special nation (or Kingdom).  And we are God’s very own possession.  You know, people take care of the things they own.  If you rent a house or a car, you should take care of it.  But if you own the house or the car, it is even more special to you and you will pay special attention to caring for those things you actually own.  And no one is more qualified or capable and guaranteed to take car of their possessions than God.   God takes care of His stuff so He's gonna take care of you.

Luke 22:28-30
“You have stayed with me in my time of trial. 29 And just as my Father has granted me a Kingdom, I now grant you the right 30 to eat and drink at my table in my Kingdom. And you will sit on thrones, judging the twelve tribes of Israel. 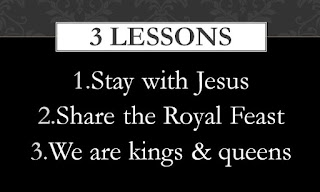 3 Important Lessons
There are three important lessons I want you to hear from Jesus' word in Luke 22:28-30.

Number 1. Stay with Jesus – We are God's Kingdom, His royal priesthood, but we still live in enemy territory. Most of the world still does not yet obey God’s Word. They were so threatened by the Lord, they crucified Him.  Jesus said, “Here on earth you will have many trials and sorrows. But take heart, because I have overcome the world.” (John 16:33) Do you trust Jesus enough to stay with him, even when there’s trouble?

Number 2. Share the Royal Feast – Jesus is the King of kings and Lord of lords and He invites his followers to eat and drink at His table in His Kingdom. The greatest example of the Kingdom Feast available in the world today is the Lord's Supper (Holy Communion, the Eucharist).  You should partake of it often.  For in doing so, we sit at the table with the King and we remember what He did for us and how it changes everything and we also see how to live and find the strength we need to do it.

Number 3. We are kings and queens – Jesus said we will sit on thrones and rule the twelve tribes of Israel.  Who sits on a throne?  Kings and queens sit on thrones.  I have much more I want to say about what it means to rule as a king or queen in God's Kingdom and I will next week.  However, for today, I just want you to know and be encouraged that Jesus says you are a king or a queen.