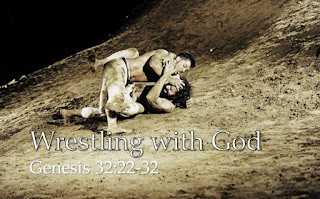 Introduction
Have you ever wrestled?  When I was a young kid, my older brother used to like to wrestle with me.  Of course, he was 8 years older, so it wasn't much competition.  However, he always let me do well enough so it was still fun for me.  I used to wrestle with my kids when they were younger in much the same way.  We would wrestle on the bed and I would tickle them and it was fun for us all; I had to be careful, though, not to hurt them since I'm was so much bigger and stronger.
One of the most fascinating stories in our Bible is the story of Jacob wrestling with God.  Can you imagine? A mortal man wrestling with the Creator of the universe?  It's almost unthinkable!  This is one of the pivotal stories of the Bible. It is where the name Israel comes from—the name of God's chosen people and the name of the country we know even today as a key player in our world’s geopolitical power struggles.
As we study this intriguing passage over the next few weeks, we will consider the ways we wrestle with God and the effect it has on us, on our circumstances, and on the people around us.  I invite you to read the blog each week as we study this story together.

Genesis32-22-32
22 During the night Jacob got up and took his two wives, his two servant wives, and his eleven sons and crossed the Jabbok River with them. 23 After taking them to the other side, he sent over all his possessions.

24 This left Jacob all alone in the camp, and a man came and wrestled with him until the dawn began to break. 25 When the man saw that he would not win the match, he touched Jacob’s hip and wrenched it out of its socket. 26 Then the man said, “Let me go, for the dawn is breaking!”
But Jacob said, “I will not let you go unless you bless me.”

28 “Your name will no longer be Jacob,” the man told him. “From now on you will be called Israel, because you have fought with God and with men and have won.”

“Why do you want to know my name?” the man replied. Then he blessed Jacob there.

30 Jacob named the place Peniel (which means “face of God”), for he said, “I have seen God face to face, yet my life has been spared.” 31 The sun was rising as Jacob left Peniel, and he was limping because of the injury to his hip. 32 (Even today the people of Israel don’t eat the tendon near the hip socket because of what happened that night when the man strained the tendon of Jacob’s hip.) 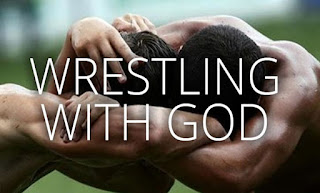 Key Points
Let's begin by pointing out a few key elements in this story.  First of all, you need to understand the larger narrative of Jacob's life and relationship with his twin brother Esau.  There was a great sibling rivalry between Jacob and Esau and it was fueled by their parents favoritism.  Their father, Isaac, favored Esau, but their mother, Rebekah, preferred Jacob.  Jacob was a cunning man and he found a way to trick Esau out of the family blessing and inheritance.  It infuriated Esau so much he vowed to kill Jacob.  Jacob had to run for his life to a foreign land.
Well, years went by and Jacob grew up and grew wealthy with wives, servants, children, and possessions.  He decided it was time to finally face his brother Esau.  He began the journey home, not knowing if Esau still wanted to kill him.  And that's where we come to the strange story in Genesis chapter 32.  Jacob has sent all his possessions across the Jabbok River and he is all alone on the other side of the stream.
There is a great element of fear in the story.  There is the fear of what Esau might do.  There is the fear of the darkness of nigh and it is terrifying that a strange “man” attacks Jacob.  A deadly struggle ensues that seriously injures Jacob.  And then—perhaps the most terrifying element of all—we find out the "man" is actually God.
We know the “man” in this episode is God for several reasons.  First of all, the “man” himself claims Jacob has "fought with God".  Second, Jacob renamed the place “Peniel” at the end of the story (Peniel means “face of God”).  Third, Jacob said, “I have seen God face to face, yet my life has been spared.”” (Verse 30)  As strange as it is, the story clearly indicates God—in human form—is the man who wrestled with Jacob.
But it gets even more strange because Jacob wins!  Jacob must have been an incredible wrestler, because the passage plainly says the “man” (who was God) realized He would not win.  That's incredible!  How can a man win a wrestling match with God?
Well, in a sense, Jacob was a wrestler all his life—the Bible says he came out of his mother’s womb grasping the heel of his twin brother Esau.  His name, Jacob, literally means “heel grabber”.  Still, how can any mortal wrestle with God and win?
Jacob didn’t actually "win".  He just sort of fought God to a stalemate.  Jacob managed to hold on to the point that God couldn’t get away.  Even when God dislocated Jacob’s hip, Jacob would not let go.  It may be that God realized the only way he could win the match was to kill Jacob or hurt him so grievously he might as well be dead (and God didn’t want to do that).  God also knew the sun was going to rise soon and Jacob would be able to see God’s face in full light.  It has been said that no one can see God’s face a live.  God’s face is so glorious a sinful human being cannot endure the pure, sinless, glorious face of God in its fullness.  Such a sight would overwhelm and consume anyone without the protection of Christ’s atonement.  (Since Christ had not yet atoned for our sin on the cross, Jacob was without protection and unable to look upon God's face in the full light of day.)
Yet Jacob was determined hang on to God until God blessed him.  He was even willing to risk death to receive God’s blessing.  Time was running out.  Every minute that passed brought the rising sun closer to the horizon; God’s face became more and more visible in the growing light.  There was no more time for God to wrestle.  For Jacob’s own safety, God needed Jacob to let Him go and so God gave Jacob the blessing he wanted.  That’s pretty amazing!

A Lesson for Us
There is a lesson in this for us.  How badly do you want God's blessing in your life?  How far are you willing to go?  Jacob was willing to risk death for the blessing. How about you?
We say we want God to bless us. We say we want Jesus to save us and be our Lord. But how far are we willing to go?  Are you willing to pray regularly?  Are you willing to read your Bible everyday?  Are you willing to attend a church with other believers and learn how to live as a Christian?  Are you willing to be held accountable by others on the same spiritual journey (and hold them accountable as well)?  Are you willing to love others and serve as Jesus did?  Are you willing to make sacrifices for your goals as a Christian (sacrificing your time, your pride, your energy, your resources...)?  How far are you willing to go for God's blessings in your life?
I don’t mean that we must do something to earn God’s blessing or to win salvation. We cannot do anything to earn it. It is given freely by God’s grace.  However, blessings come to those who are determined, not those who could care less.  And the Truth is, becoming a Christian—a follower of Christ—will change you permanently.  Jesus said it is like being “born again.”  Just like Jacob limped for the rest of his life due to his encounter with God, you will be permanently changed if you become a follower of Christ.
There is another lesson here.  God’s wants to be directly involved in your life. He doesn't stand off at a distance; He get's up close and personal.  I have been learning Brazillian Jiu-Jitsu for over 2 years.  People like to joke that their pastor does Karate, but BJJ is not punching and kicking.  It is more like wrestling than Karate.  I have invited my wife to come try it out she won't do it.  She says it's gross.  I guess she may be right.  Jiu-jitsu is very strenuous and you're soon drenched in sweat, but not just your own sweat; it's everyone else's sweat too.  You see we are rolling around on the mats dripping sweat all over each other.  It's up close and personal work. 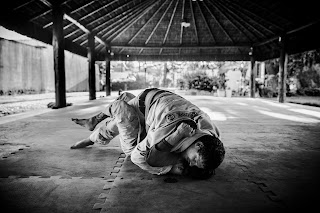 Now think about that.  God wrestled with Jacob all night.  They were rolling around in the dirt together sweating and bleeding all over each other.  God was willing to get Jacob's sweat and blood and maybe even tears all over Him.  You see, God doesn't stand off at a distance.  God wants to be directly and intimately involved in Your life.  Are you willing to wrestle with God?
As God wrestles with you, He may push you to your limits and test your determination.  All of this helps you grow.  It might hurt and it may even leaving you limping, but God will always keep you safe. Remember, He was willing to let Jacob win in order to save Jacob’s life.  We see an even greater example of God's protective nature in the New Testament.  Jesus shows just how far God will go for our benefit. Jesus (who was God incarnate) sacrificed his own life on the cross for our sake. God was willing to die so we can live.

There is one last lesson I want to point out today.  No matter what you are wrestling with there is hope.  You don't have to win; you just have to hold on to Jesus long enough for the blessing to come.  So take courage today.  Whatever you are facing, don't give up.  Cling to Jesus.  Don't let go. Just hang on until Jesus give you the blessing.