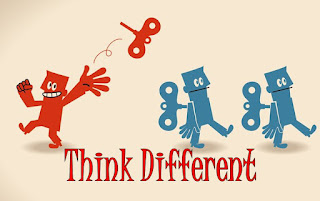 Introduction
Long ago God chose you to be holy and different.  Have you ever noticed that all the heroes of the Bible were a little different?  Some might say, they were a little off or weird; they were definitely different.  Noah built an ark out in the middle of dry land.  Can you imagine what his neighbors thought when he build the biggest boat they'd ever seen and there wasn't anywhere to sail it?  Abraham took his only son up on top of Mt. Moriah to sacrifice him, because "God told him to."  That's just crazy!  King David got so excited when he was bring the ark of the covenant to Jerusalem, he started dancing so hard and worshiping God his clothes came off.  He embarrassed his wife and she had to scold him for exposing himself and not being dignified like a king should be.  david was different; his heart was different.  He loved God more than his own dignity.  The prophet Ezekiel ate a biblical scroll and said it tasted as sweet as honey!  That's different!
Jesus was the most different of all.  He is the divine son of God.  If He was going to be born on earth, he should have been born in the most majestic palace or temple with the most important people in the world gathered around, but he did things different.  He decided to be born in a manger with cows and sheep and shepherds gathered around.  The Son of God cae to change the world and he had the power to do it all by himself, but he instead he chose 12 mortal men to help him do it.  I would have chose the 12 most gifted, smartest, powerful, influential people in the world to help me, but Jesus did something different.  Instead of picking the best and brightest , he pick a bunch of smelly fishermen, a collaborator, and a terrorist determined to kill collaborators!  Peter was a bragger. Thomas was a doubter. James and John were a manipulators. And Judas was a betrayer!
And instead of conquering his enemies by force, Jesus chose to be different—he let them crucify him on a cross and he forgave them.  And then he said to his rag tag team of disciples, “Alright boys, you know what to do.  Go change the world.”  And today, Christianity is the largest religion on the face of the earth!  Apparently God sees things different than we do and He has a thing for people who are different.  God wants you to be different! Don’t you want to be different?

Romans 12:1-3 (Emphasis added)
1And so, dear brothers and sisters, I plead with you to give your bodies to God because of all he has done for you. Let them be a living and holy sacrifice—the kind he will find acceptable. This is truly the way to worship him. 2 Don’t copy the behavior and customs of this world, but let God transform you into a new person by changing the way you think. Then you will learn to know God’s will for you, which is good and pleasing and perfect.


3 Because of the privilege and authority God has given me, I give each of you this warning: Don’t think you are better than you really are. Be honest in your evaluation of yourselves, measuring yourselves by the faith God has given us.

God Chose You to Think Different 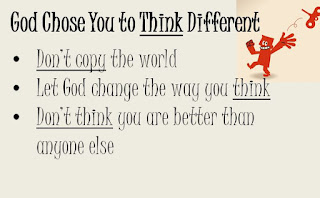 Let me first point out a few key insights about this passage that we need to hear.  First, don’t copy the world.  The world has a way of doing things and ideas about right and wrong, but we don't pattern ourselves after the world.  We should be different.
The Amish people seem to take this verse to heart.  They very literally choose to be different and reject the innovations of modern society.  They dress in old-fashioned clothes, refuse to use TVs or cell phones, and even still ride in horse and buggies.  I admire their dedication to being different, but I don't think that's how God wants us to be different.  The passage says let God change the way you think.
We may dress like everyone else in the world, use modern technology, and do many similar things as everyone else, but God has changed the way we think.  And when you think different, you have a different attitude and you do things for a different reason and you will often act different.
And finally, I want to point out the passage says, "Don’t think you are better than anyone

else—evaluate yourself honestly..."  I love the way the Word instructs us on this because it addresses to ends of the same spectrum.  There are some people who arrogant and conceited, who think they are "all that and a bag of chips."  To them the Word warns, "Don't think you are better than anyone else."  If you're full of pride or look down on others, you need to change the way you think.  But there are others who struggle with low self-esteem.  And the Word addresses that too.  It says, "Be honest in your evaluation of yourselves, measuring yourselves by the faith God has given us." God made you and God doesn't make junk.  You are special.  God's fingerprints are all over you.  So let God change the way you think. 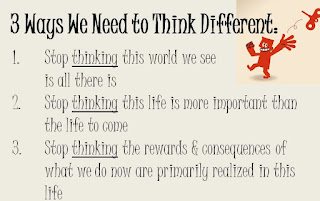 Three Ways We Need to Think Different:
I want to give you three ways we need to let God change the way we think.  First, stop thinking this world we see is all there is.  This world is an amazing place and it's full of wonders.  We are blessed to be able to enjoy this life, but there is more going on than just what we see.  In fact, this lifem this world, is not what it's all about.  We are tempted to think that because it's all we see right now.  However, the Word teaches us there is more.  There is a spiritual battle going on behind the scenes we can't see.  Eternity hangs in the balance.  There Life to come when this life is over.  And the rewards of this life aren't that important when measured in the scales of Eternity.  So, as the old hymn says, “Turn your eyes upon Jesus. Look full in his wonderful face, and the things of earth will grow strangely dim in the light of of his glory and grace.”  Stop thinking this world, this life, is all there is.
Second, stop thinking this life is more important than the Life to come.  Since this current life is all we've known and is what's immediately pressing in upon us, we get so wrapped up in it's joys and concerns.  Have you ever thought about this when we are praying about those who are sick?  Suppose we pray for someone who has terminal cancer and God's miraculously, unexplainably heals them.  (The cancer was there one day and gone the next.)  We would praise God and be so happy!  But what was really achieved?  That healing--at best--is only temporary.  Even if they live 40 or 50 years more without any other traces of cancer, then they will still die.  Everyone in this life dies.  The True Healing comes when they are resurrected in Eternal Life.  And a million years fro now, when we are praising God on that Golden Shore, no one will give a second thought to the few measly years we lived in this fallen world or the joys or sorrows we faced here.  All the things we spend so much time fretting over will seem infinitely inconsequential. Romans 8:18 - “What we suffer now is nothing compared to the glory he will reveal to us later.”
Some would say: “Yeah, but I want glory in this life and in the future one."  Why do you deserve that?  Do you think you are any better than the saints that have gone before you?  Think of those saints who suffered and died for Christ.  Think of Stephen in the book of Acts who was stoned to death simply because he preached about Jesus' death and resurrection.  What about the Disciple Peter who was crucified upside down or the Apostle Paul who was beheaded in Rome.  Do you deserve more rewards in this life than those protestant reformers who worked so hard to help the Church return to true faith in Christ and received as their only reward in this world to be hanged, drawn and quartered, burned at the stake, or drowned--simply because they believed what God said in the Bible more than what the Pope said in a corrupted church in Rome?  We need to change the way we think.
And third, we need to stop thinking the rewards and consequences of what we do now are primarily realized in this life.  People ask, "Why do the wicked prosper?  Why do bad things happen to good people?"  First of all, I would say who is really good?  The Bible says, "No one is good.  Not a single one." (paraphrase of Romans 3:10).  We might think of someone who is especially good, but that's only because we are comparing them to ourselves.  But if we place them next to a holy God, all their imperfections and sins are immediately clear and we see they are far from "good."
Jesus said, "[God] sends rain on the just and the unjust alike." (Matthew 5:45)  And he also taught that we would have to wait until God's sorts out all the weeds from the wheat at the end of the age.  We have to accept that Some things will not be settled in this life.  Your faithfulness in this life may not be rewarded until you get to Heaven, but God will bring justice according to His perfect wisdom in eternity.

Are You Ready to Think Different?
Jesus changed the world—he changed eternity—by his death and resurrection.  Because He chose the cross instead of the sword, you can be forgiven, redeemed, healed and live different, holier life than you have been living before. Long ago, God chose you to be different and holy.  Chose to follow Jesus today and let His grace enable you to think different so that you will act different and be different. 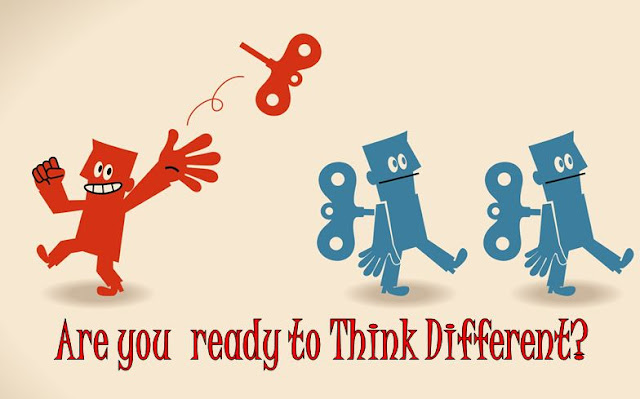