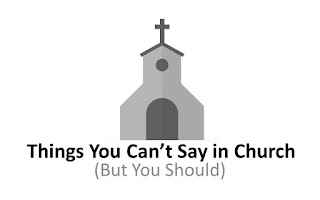 Introduction
I’m preaching a series of sermons called, “Things you can’t say in church (but you should)”.  And I want to emphasize that last little part that’s in parentheses – (But You Should).  You see these are things that a lot of people think or feel you shouldn’t say in church, but you absolutely should.  Don’t ever let someone convince you not to say these things in church.  You must say them.  Even more, you must live them out.  They must be a core part of who you are.  Genuine Christianity is not about being respectable or dignified.  Do you think if the trumpets of Heaven blew with a mighty blast and the roof of this sanctuary were ripped away and the Holy Presence of God descended upon us that anyone would remain dignified, reserved, and respectable?  No.  You would probably turn into a blubbering idiot either fearing for your miserable life or else be overcome with immense love and admiration for your God.  But none of us would be respectable or dignified.  But there are still many who feel going to church means you must be respectable and dignified and that you can’t say certain things in church.  And I say that’s ridiculous.

Last week, I shared how a lot of people think you can't say, "I'm broken" in church.  But I say, you you should; you absolutely should.  It's essential, because Jesus came to heal the broken.  And if you ain't broken, Jesus can't fix you.  The truth is, we're all broken.  We just need to admit it, repent, and let Jesus heal us.

I’ve got another one today:  “I’m on fire!”  Now what does it mean to be on fire in the church?  I’m talking about people who are full of passion and fire for the Lord.  A lot people are annoyed or afraid of people who are on fire for the Lord.  They just want everyone to come to church and sit down and be quiet—to be dignified and respectable and not stir up any controversy.  Just be a good boy or girl.  But Jesus wants us all to be on fire.  I know this because it’s foretold throughout the Bible.

John the Baptist foretold it in Matthew 3:11.  He said, “I baptize you with water for repentance. But after me comes one who is more powerful than I, whose sandals I am not worthy to carry. He will baptize you with the Holy Spirit and fire.”  And Jesus said in Luke 12:49 - “I have come to bring fire on the earth, and how I wish it were already kindled!"  And then, in Acts 2:1-4 we see how the Church was filled with the Holy Spirit’s fire.

Acts 2:1-4
1 When the day of Pentecost came, they were all together in one place.2 Suddenly a sound like the blowing of a violent wind came from heaven and filled the whole house where they were sitting. 3 They saw what seemed to be tongues of fire that separated and came to rest on each of them. 4 All of them were filled with the Holy Spirit and began to speak in other tongues as the Spirit enabled them. 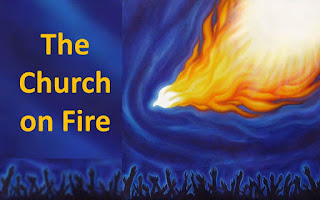 The Church on Fire
Pentecost is an annual Jewish festival.  It is also the day Christians celebrate the birth of the Christian Church.  This year, Pentecost falls on June 9.  In this story, the faithful followers of the resurrected Jesus (which is the Church) were all gathered in the Temple in Jerusalem when the Holy Spirit set them on fire.  I don’t mean that they were literally set ablaze.  What I mean is the Holy Spirit filled them with passion and power to serve the Lord.  The passion and power were so vibrant it even looked as if tongues of fire were dancing above their heads.  And these people began speaking in other languages so that anyone who was gathered in the Temple from all over the world could hear these “on fire” Christians sharing the Good News about Jesus Christ in their very own language.

Acts 2:13 says, “Some, however, made fun of them and said, “They have had too much wine.”  Isn’t that a typical response of many religious people who are frightened or annoyed when they see someone else in worship who has a little too much passion for God?  They start scoffing and say, “They’re just showing off,” or “They’re mentally unbalanced,” or “They’re just a religious fanatic.”  Some people think you can’t say “I’m on fire!” in church.  But I say, you should; you must!  Because the Church Jesus established is filled with the fire of the Holy Spirit!

“Awe come on, preacher!”  You say, “That’s just stuff that happened in the Bible.  That don’t happen anymore.”  Is that so?  Are we not the same Church today as they were then?  Is not the same Jesus still our Lord?  Are not those who trust in Jesus Christ as Lord and Savior still filled with the Holy Spirit?  Is not the Holy Spirit that fills us the same Holy Spirit that filled these believers in Acts Chapter 2 on the Day of Pentecost?  I say it is.  God has not changed.  The only thing that’s changed is your belief.

Some think God and power and miracles and real faith was something that happened long ago.  Some think God is some distant deity who lives far away and is not actively involved in our world anymore.  I say, "No sir!  He is here, right here, right now." I say God still pours out His Holy Spirit fire on anyone who does not pretend to be too dignified and respectable or uninterested to receive Him.  We are called to be a Church full of people who gladly proclaim, “I’m on fire!” 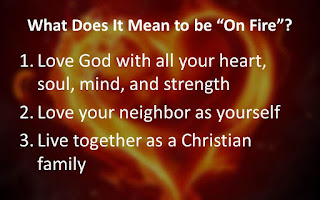 What Does It Mean to Be On Fire?
We can see what if means to be on fire in the church.  All we have to do is look at these believers in Act 2.  There are three main things we see.

First of all, these “on fire” Christians loved God with all their heart, all their mind, all their soul, and all their strength.  They were wholeheartedly and completely committed to Jesus Christ.  And why shouldn’t they be?  The religious leaders in Jerusalem arrested their Jesus, brutally beat him, crucified him, and buried him.  But on the Third Day, Jesus Christ rose from the grave!  And everyone who truly believes Jesus Christ is no longer dead, realizes there is nothing in this world more important than following Jesus Christ with your whole heart.  These believers may have been afraid the religious leaders who killed Jesus would try to kill them.  But they didn’t let that fear keep them away.  Their faith in Jesus Christ was more important than anything else.

Second, we see that these “on fire” Christians in Acts loved their neighbor as themselves.  For as soon as the Holy Spirit set them on fire, they began to preach the Good News about Jesus Christ to everyone around them.  Some might think they would be angry and retaliate.  Some might wonder that they didn’t scream, “You killed my Lord Jesus and you’re gonna pay!”  Some might think they would use the fire of the Holy Spirit to burn up the wicked religious leaders of Jerusalem for their terrible rebellion against God.  But they didn’t do any of that.  Instead, they realized we are all broken sinners who deserved to be burned up by the fire of God, but instead God loves us and sent His Son to save us, not destroy us.  And so these on fire Christians in Acts 2 use the power of the Holy Spirit to speak in all the languages of the people gathered for worship in Jerusalem so that everyone can hear and understand that Jesus offers forgiveness and salvation.  They speak, because they know God has loved them and they offer the same love to everyone—even their enemies—hoping that all will repent of their sins and turn to God and be forgiven and become “on fire” Christians just like them.  And many of them repent and turn to Jesus.  Acts 2:41 says 3,000 new people repented of their sins and started following Jesus Christ that day.  It is incredible what happens when a few Christians get set on fire!

And there is a third thing we see.  Slide – These “on fire” Christians became a family.  Acts 2:42-47 says:
42 They devoted themselves to the apostles’ teaching and to fellowship, to the breaking of bread and to prayer. 43 Everyone was filled with awe at the many wonders and signs performed by the apostles. 44 All the believers were together and had everything in common. 45 They sold property and possessions to give to anyone who had need. 46 Every day they continued to meet together in the temple courts. They broke bread in their homes and ate together with glad and sincere hearts, 47 praising God and enjoying the favor of all the people. And the Lord added to their number daily those who were being saved.

You see, their fellowship—their being together, learning together, praying together, working together, worshiping together, eating together—became the most important thing in their life.  And their love for one another was proof to everyone, everywhere that there was something special and powerful happening.  And more and more people started turning to Jesus Christ to be saved.

Say "I'm on Fire!"
So don’t ever let anyone discourage you from saying “I’m on fire!” in Church.  Pray that the Holy Spirit would set you on fire—set us all on fire—that we might be filled with passion and power to be true believers of Jesus Christ—the continuation of the Church described in the book of Acts.