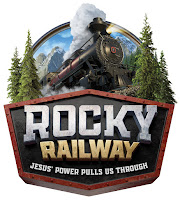 Introduction
Vacation Bible School is a fun time for kids (and adults) to learn about the Bible and Christian faith.  As my church prepares for Vacation Bible School, July 12-16, we are studying the themes and passages from each day of VBS.  The title of our VBS is the Rocky Railway.   We will pretend to be riding through VBS on a train.  Our theme is “Jesus’ Power Pulls Us Through!” A train locomotive is a powerful engine that pulls a long train of cars filled with tons and tons of cargo or passengers.  Jesus is the powerful Son of God who can pull us through anything. 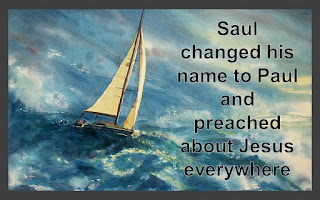 Background for the Story
Last week I shared the story of Saul and Ananias.  Saul was an enemy of Christians, going from town to town having them arrested, tortured, and even killed.  Jesus appeared to Saul and (with Ananias' help) Saul converted to Christianity.  Jesus changed Saul's life so drastically, he changed his name to Paul.

Paul went from town to town preaching the Gospel Truth that Jesus Christ is the Son of God who died on the cross to pay the price for our sins so we can be reconciled to God through grace when we put our faith in Christ.  Paul was a great evangelist and so many people turned to Jesus because of his missionary work.

However, many of Paul's former friends who opposed Christianity were very upset that Paul was now a Christian.  They feared his message would change their way of life in ways they did not want.  In Jerusalem, Paul's enemies started a riot destroying property and causing civil unrest.  They falsely accuse Paul of teaching lies and causing the trouble.  Paul was arrested and put in prison and endured a broken justice system.  If you think the American justice system has problems today, you can't imagine the way it was in Paul's day.  You couldn't get a fair trial.  You weren't presumed innocent until proven guilty.  And the authorities would often hold you until you paid bribes--so that inocent people were often punished while guilty people with money went free.

Finally, Paul was granted a hearing before Caesar in Rome (which would kind of be like going before the Supreme Court for us).  But in order to appear before Caesar, Paul has to travel on a ship from Israel to Rome, Italy.  It is a long and treacherous trip across the Mediterranean Sea. 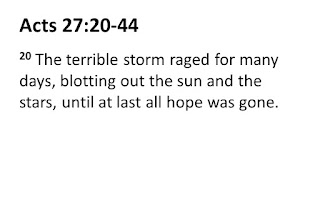 Acts 27:20-44
20 The terrible storm raged for many days, blotting out the sun and the stars, until at last all hope was gone.
21 No one had eaten for a long time. Finally, Paul called the crew together and said, “Men, you should have listened to me in the first place and not left Crete. You would have avoided all this damage and loss. 22 But take courage! None of you will lose your lives, even though the ship will go down. 23 For last night an angel of the God to whom I belong and whom I serve stood beside me, 24 and he said, ‘Don’t be afraid, Paul, for you will surely stand trial before Caesar! What’s more, God in his goodness has granted safety to everyone sailing with you.’ 25 So take courage! For I believe God. It will be just as he said. 26 But we will be shipwrecked on an island.” 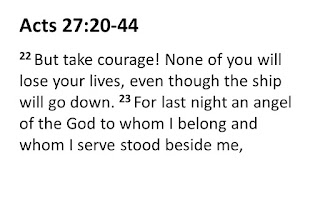 27 About midnight on the fourteenth night of the storm, as we were being driven across the Sea of Adria, the sailors sensed land was near. 28 They dropped a weighted line and found that the water was 120 feet deep. But a little later they measured again and found it was only 90 feet deep. 29 At this rate they were afraid we would soon be driven against the rocks along the shore, so they threw out four anchors from the back of the ship and prayed for daylight.
30 Then the sailors tried to abandon the ship; they lowered the lifeboat as though they were going to put out anchors from the front of the ship. 31 But Paul said to the commanding officer and the soldiers, “You will all die unless the sailors stay aboard.” 32 So the soldiers cut the ropes to the lifeboat and let it drift away.
33 Just as day was dawning, Paul urged everyone to eat. “You have been so worried that you haven’t touched food for two weeks,” he said. 34 “Please eat something now for your own good. For not a hair of your heads will perish.” 35 Then he took some bread, gave thanks to God before them all, and broke off a piece and ate it. 36 Then everyone was encouraged and began to eat— 37 all 276 of us who were on board. 38 After eating, the crew lightened the ship further by throwing the cargo of wheat overboard.
39 When morning dawned, they didn’t recognize the coastline, but they saw a bay with a beach and wondered if they could get to shore by running the ship aground. 40 So they cut off the anchors and left them in the sea. Then they lowered the rudders, raised the foresail, and headed toward shore. 41 But they hit a shoal and ran the ship aground too soon. The bow of the ship stuck fast, while the stern was repeatedly smashed by the force of the waves and began to break apart.
42 The soldiers wanted to kill the prisoners to make sure they didn’t swim ashore and escape. 43 But the commanding officer wanted to spare Paul, so he didn’t let them carry out their plan. Then he ordered all who could swim to jump overboard first and make for land. 44 The others held on to planks or debris from the broken ship. So everyone escaped safely to shore. 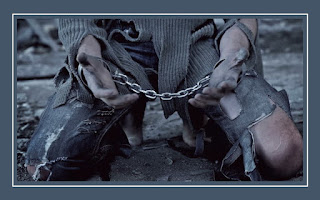 The Most Vulnerable People
I think this story is really going to resonate with the kids at VBS.  It’s a story that really resonates with the most vulnerable people.  You can’t get much more vulnerable than being on a boat in the middle of a terrible storm in the 1st century.  The used sail boats made out of wood and ropes that were at the mercy of the wind and were very fragile in rough seas.  (And there was no coast guard to come save you!)

How would you feel to be on a flimsy sailing vessel in the middle of a storm that lasted two weeks and the boat is about to sink?  How would you feel to be Paul—to be on that boat, but to also be in chains?  How would you feel to be surrounded by Roman soldiers who had orders not to let any prisoner escape.  It was said that if a prisoner escaped, the soldiers guarding them had to take the prisoner’s place!  So Paul is in chains on a boat that’s about to sink with frightened soldiers standing around him with swords debating whether they should kill him so he can’t escape!  He was totally helpless, but God was on Paul’s side and that gave Paul hope.  Paul shared that hope with everyone--even the ones who wanted to kill him.

Now, think about the kids that will be at our VBS.  They’re the most vulnerable people of all.  There’s a lot of dangerous, scary things happening in our world.  But they are also kids.  They are the most vulnerable people in the world.  They have very little choice in what happens to them.  Kind of like Paul, who was a prisoner who had to do whatever his captures told him, kids have to do what they’re told to do.  Their parents and teachers tell them what to do and they have to do it—even if it’s scary or hurts or they don’t want to do it.

Do you ever feel vulnerable like that?  Do you ever feel like everyone else is telling you what to do and you just feel like you have to do it even if you don’t like it or don’t agree?  Do you feel helpless and vulnerable?  If that's you, I hope you hear the message of this story from God's Word. 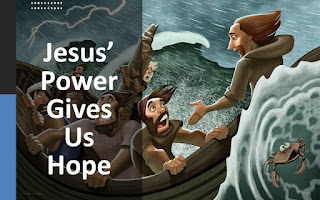 Jesus’ Power Gives Us Hope
Jesus had a purpose for Paul – to preach the Good News about Jesus everywhere and eventually in Rome.  If the Gospel could be preached in Rome, the hope of Christ could spread all over the world.  Nothing was going to stop this from happening. Jesus sent an angel to reassure Paul.

Jesus has a purpose for the kids who will attend our VBS. We have the privilege to help them discover their purpose as children of God--to know that God loves them, to learn that Jesus saves and they can have a life of meaning and purpose, and ultimately eternal life when this life is over.

Jesus has a purpose for your life too. Jesus is not going to let anything stop you from fulfilling your purpose. Take courage! Even when your purpose in this life is over, Jesus offers you eternal life with God the Father where there will be no more sickness or death or suffering or injustice.  Jesus loves you so much he died for you. If Jesus cared enough to die for you on the cross, he’s not going to abandon you now. Trust him and put your hope in Jesus!  Psalm 31:24 says, "So be strong and courageous, all you who put your hope in the Lord!"  Are you putting your hope in the Lord today?

Prayer from Philippians 1:9-11
Jesus, I pray for the kids who will be coming to our VBS.  Watch over them and prepare them for the blessings You have for them this summer.  And help us all to overflow with love more and more.  Help us to keep growing in knowledge and understanding. Lord, I want everyone reading this to understand what really matters, so that they may live pure and blameless lives until the day You return. I know you will return in our lifetimes--whether you come for us all at once in the clouds or whether you come for us individually when we die.  Help us to be ready.  Fill us with the fruit of salvation—the righteous character you want to produce in each of us—for this will bring much glory and praise to God.  Jesus, I also pray all the volunteers who will be helping with VBS this year.  Please guide us to teach them well, and help them to have eyes to see and ears to hear and a heart full of love.  Amen.