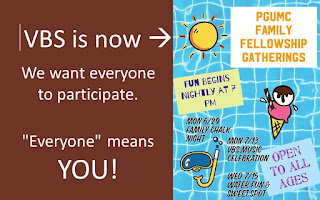 Today’s message is the most important one of this whole series.  It is the very cornerstone of everything Christians believe and do.  It is the Good News that Jesus died, but that he also rose from the grave.  The full story of Jesus death and resurrection is found in the Gospel of Matthew in chapters 26-28.  I will highlight a few passages from those chaoters. 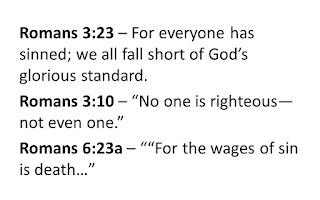 Romans 3:23, 3:10, & 6:23
You see, Romans 3:23 says, “For all have sinned and fallen short of God’s glorious standard.”  There is no one alive who hasn’t sinned.  We are broken, corrupt, sinful people.  Name one person you know who never sinned.  You may name some really good people, maybe even a “saint”, but even they have done things they shouldn’t.  And the problem with labeling a person “good” or “saintly” is that we use human standards.  (Maybe someone says you are really good at basketball.  But if they put you on the court against Michael Jordan, they would see you are really terrible. Right?)  Well, when we view people next to the holiness of God, we see we are terribly flawed.  Romans 3:10 says, “No one is righteous—not even one.”


And Romans 6:23a says, “For the wages of sin is death…”  Death is the consequence of sin.  This was not God’s original plan.  However, humanity is consumed with the selfish desire to be independent of God and in control of our own destiny.  We don't want God's Kingdom to come.  We want our own personal kingdoms to persist.  Our selfish insistence to be independent of God leads to all kinds of hurt and pain and evil and suffering; and ultimately it leads to death.

Jesus' disciples didn’t want to talk about death either.  Every time he brought it up, they wanted to change the subject.  So he used the Jewish Passover celebration to illustrate it for them.

Matthew 26:26-30
26 As they were eating, Jesus took some bread and blessed it. Then he broke it in pieces and gave it to the disciples, saying, “Take this and eat it, for this is my body.”

27 And he took a cup of wine and gave thanks to God for it. He gave it to them and said, “Each of you drink from it, 28 for this is my blood, which confirms the covenant between God and his people. It is poured out as a sacrifice to forgive the sins of many. 29 Mark my words—I will not drink wine again until the day I drink it new with you in my Father’s Kingdom.”

30 Then they sang a hymn and went out to the Mount of Olives.

The Old Rugged Cross
There’s an old hymn we sing called “The Old Rugged Cross”.
On a hill far away stood an old rugged cross
The emblem of suffering and shame
“You see, not everyone believed that Jesus was God’s Son.  Some people thought he was a liar.  They got so angry that they arrested Jesus.”[i]  They put him on trial, but it was not really a fair trial.  They tortured him and sentenced him to death. “They forced him to carry a rough wooden cross to a hill called Golgatha.  There, they nailed his hands and feet to that cross and left him to die.  In that time, only criminals were put to death on a cross.  But Jesus never sinned—he was God’s pure and perfect Son!”

The hymn “tells us the cross was an emblem—a picture—of suffering and shame.  Jesus suffered for our shame.  We may feel ashamed of the wrong things we do, the bad choices we all make.  Even though we do a lot of great things, we all have sin."

“Slain means that someone was killed.  Jesus was the dearest and best.  1 Peter 2:22 says, “He never sinned, nor ever deceived anyone.”  When we do something wrong, there’s usually a punishment, a consequence.  When we sin, the ultimate consequence is separation from God.  Forever.  Imagine being separated from God’s love, forgiveness, goodness, power, and joy forever.”

“Even though Jesus never sinned, he willingly dies for you.  He loves you so much that he took the punishment for your wrongs.  It was the only way to heal our friendship with God.  Jesus took your punishment.”

"Sometimes we value or treasure or cherish our accomplishments.  A thousand ribbons and awards or good deeds can’t wash away our wrongs.  We can never do enough good things to earn our way into heaven.  The Bible says it this way.  Ephesians 2:8, “God saved you by his grace when you believed. And you can’t take credit for this; it is a gift from God.”  We are powerless to save ourselves.  Only Jesus can save us.  So, we have to lay down all our pride, our treasures, everything at the foot of the cross  Because Jesus is the one who’s really important."

The Resurrection
Thankfully, “Jesus story didn’t end at the cross.  Remember, Jesus is God’s Son, with God’s power!  And that power is stronger than death!  Three days after Jesus died, something incredible happened."

Matthew 28:2-6
2 Suddenly there was a great earthquake! For an angel of the Lord came down from heaven, rolled aside the stone, and sat on it. 3 His face shone like lightning, and his clothing was as white as snow. 4 The guards shook with fear when they saw him, and they fell into a dead faint.

5 Then the angel spoke to the women. “Don’t be afraid!” he said. “I know you are looking for Jesus, who was crucified. 6 He isn’t here! He is risen from the dead, just as he said would happen. Come, see where his body was lying. 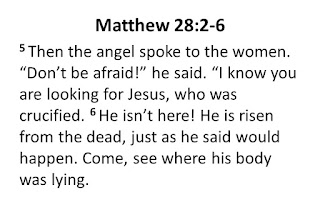 "Jesus power beat death—on that day, for Jesus.  And today, for you and me.  The Bible promises this:  “For this is how God loved the world: He gave his one and only Son, so that everyone who believes in him will not perish but have eternal life.” (John 3:16)
Because of Jesus, we can cling to the cross—the promise, hope, love, and power it represent.  The last line of the old hymn says we’ll exchange our trophies for a crown."


Revelation 21:3-4 give us a vision of the eternal life we’ll have when trust Jesus as our Lord and Savior.  It says, “3 Look, God’s home is now among his people! He will live with them, and they will be his people. God himself will be with them. 4 He will wipe every tear from their eyes, and there will be no more death or sorrow or crying or pain. All these things are gone forever.”

Conclusion
As we close, I ask you: do you trust Jesus?  Will you lay down all your trophies?  Will you cling to the old rugged cross and put all your hopes in the man who died f  If so, then he will raise you to new life too.
or you there and rose to new life?