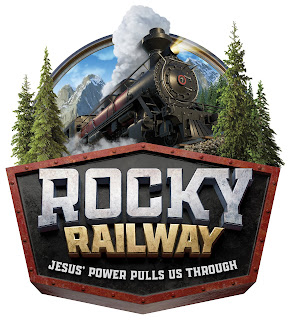 Introduction
You know, life can be hard sometimes.  It may seem like all your problems plus other people’s problems, added to all the problems of the world are just too heavy to bear.  I want you to imagine all your problems (all of them) for just a moment.  Place them all in a big railroad car.  Now, imagine the problems of your whole family are in another giant railroad car.  Then, your friends’ problems are filling up another car.  And you can just keep on going for as many railroad cars as you need.  Now, imagine all the problems of the whole world are linked together—car after car after car—on this long railroad train.  It stretches as far as you can see and includes everything—even the COVID 19 pandemic, the racism and injustice of our world, the violence and corruption.  Cars and cars of problems stretch as far as you can see.

But now imagine a powerful train engine backs up to this long line of cars and clanks into place.  This engine is the power of God’s love.  The whistle blows and the steam billows roll.  The engine chugs and chugs.  The wheels of the train begin to turn and turn.  And the massive weight of the whole world’s problems slowly begin to move.  Do you hear the train rumbling in the earth below your feet?  And the train slowly starts to me and it keeps on moving and picking up speed until it is barreling down the tracks to wherever God wants to take it!  This is the power of God’s love moving and changing our world!  Nothing can stop Him!

Today, I’m starting a new series based off our upcoming VBS curriculum at my church:  Rocky Railway – Jesus Power Pulls Us Through.  VBS at my church will be July 12-16.  We debated about whether we should host VBS considering the COVID 19 pandemic.  We felt we should do something as long as we could do it safely.  Kids are ready for a fun, organized activity with their friends. Their parents are ready too.  So, we ae looking at ways to limit risks of infection and virus transmission during our program.  We’re gonna need your prayers. We’re gonna need volunteers. But I believe God’s power will pull us through.

Today, I begin a 5-part message series based off the five days of vacation Bible school. The message is so timely for us all right now, because many people are full of anxiety from the several months of this pandemic.  We've been told to stay home, there is a virus outside that lives on surfaces and floats in the air.  Going out in public risks an awful infection that could kill you or someone else.  Even as we start to see the virus subside, the fear remains.  Our VBS is an exercise in faith.  As we tell people to have faith and trust Jesus, we will also be literally trusting Jesus as we provide a safe fun, learning experience for the kids as we gather.

Our theme is “Jesus’ power pulls us through.” Jesus power pulls us through: And helps us do hard things, gives us hope, helps us be bold, let’s us live forever, and helps us be good friends.  We are all reeling from the last several months.  It will take bold faith to come out of this.  We have a chance to show our kids (and the world) that our faith is more than just words.  We believe Jesus is calling us to step out in faith with our VBS.  We are trusting Jesus with this.

Throughout the series, we will read the stories of the New Testament Church--primarily from the Book of Acts.  These early Christians also lived in uncertain, scary times.  It was hard for them to leave their homes and be witnesses for Jesus Christ.  The world around thought they were crazy for believing Jesus died and rose again, that he was the Son of God sent to save the world.  Their faith could get them arrested, tortured, or even killed.  Yet they were bold and faithful to do everything God called them to do.  We could learn a lot from their faith--and we will.

Today, we learn how one of those early, faithful Christians relied on Jesus power to help him do something very hard.  Jesus power helped him and Jesus power also helps us to do hard things. 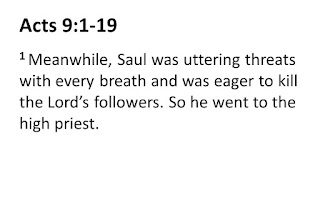 Acts 9:1-19
1 Meanwhile, Saul was uttering threats with every breath and was eager to kill the Lord’s followers. So he went to the high priest. 2 He requested letters addressed to the synagogues in Damascus, asking for their cooperation in the arrest of any followers of the Way he found there. He wanted to bring them—both men and women—back to Jerusalem in chains.

3 As he was approaching Damascus on this mission, a light from heaven suddenly shone down around him. 4 He fell to the ground and heard a voice saying to him, “Saul! Saul! Why are you persecuting me?”

And the voice replied, “I am Jesus, the one you are persecuting! 6 Now get up and go into the city, and you will be told what you must do.”

7 The men with Saul stood speechless, for they heard the sound of someone’s voice but saw no one! 8 Saul picked himself up off the ground, but when he opened his eyes he was blind. So his companions led him by the hand to Damascus. 9 He remained there blind for three days and did not eat or drink.

10 Now there was a believer in Damascus named Ananias. The Lord spoke to him in a vision, calling, “Ananias!”

11 The Lord said, “Go over to Straight Street, to the house of Judas. When you get there, ask for a man from Tarsus named Saul. He is praying to me right now. 12 I have shown him a vision of a man named Ananias coming in and laying hands on him so he can see again.”

13 “But Lord,” exclaimed Ananias, “I’ve heard many people talk about the terrible things this man has done to the believers in Jerusalem! 14 And he is authorized by the leading priests to arrest everyone who calls upon your name.”

15 But the Lord said, “Go, for Saul is my chosen instrument to take my message to the Gentiles and to kings, as well as to the people of Israel. 16 And I will show him how much he must suffer for my name’s sake.”

17 So Ananias went and found Saul. He laid his hands on him and said, “Brother Saul, the Lord Jesus, who appeared to you on the road, has sent me so that you might regain your sight and be filled with the Holy Spirit.” 18 Instantly something like scales fell from Saul’s eyes, and he regained his sight. Then he got up and was baptized. 19 Afterward he ate some food and regained his strength. 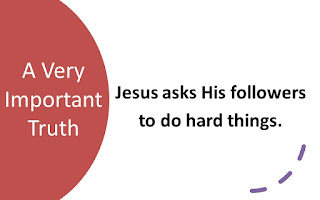 When we look at the early Christians (and Christians throughout the ages), we see that they lived very hard lives and overcame.  They lived through plagues, trials, tribulations, and persecutions all while boldly telling people about Jesus and sharing His love.

Jesus asks His followers to do hard things.  He asked them to forgive--not just the little things, but the big things like betrayal and murder.  How many times?  Jesus said not just seven times, but seven times seventy (in other words, never stop forgiving).

Sometimes, when we are faced with hard things, we might want to skip it. We might try to back out. We might try to hide. Maybe we just hope and pray that someone else will do it, while we look the other way.   What if Ananias did that?  You know, Saul in this story eventually became St. Paul and wrote most of the New Testament.  His evangelistic efforts converted thousands and helped Christianity grow from a small minority to the largest religious faith in our world today.  If Ananias skipped the hard thing God asked him to do, we might not be Christians today.

What if the early Christians skipped the hard things God called them to do?  What if the patriots of the American Revolution skipped the hard things?  What if our forefathers, inspired by the belief that all men were endowed by their Creator with certain inalienable rights, decided not to put their lives and property on the line to fight for freedom and independence?  What if Jesus decided to skipp the crucifixion because it was too hard?

Jesus asks his followers to do hard things because it changes the world.  We need to pray for each other so we can find the courage and power we need to do hard things.  Many times, we pray for God to take away our problems.  If we are sick, we ask God to heal.  If we have a hard problem, we ask God to solve it for us.  However, God didn’t take away Ananias’ hard problem. God gave Ananias the hard problem. God asked Ananias to do something hard, but God also helped Ananias to do it. So, instead of always asking God to give us an easy life, why don’t we start asking God more to help us do the hard things that are in our lives.  How about we pray for boldness and courage.  Maybe, that's what He wants us to do. 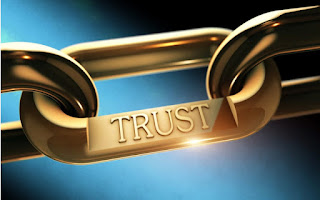 Trust
This requires trust. We have to trust Jesus will pull us through.

Do you believe Jesus has the power to pull you through the COVID 19 pandemic?

Do you believe Jesus has the power to pull you through unemployment?

Do you believe Jesus has the power to pull you through a threatening economy?

Do you believe Jesus has the power to pull you through racism? Violent protests? Injustice? Anxiety?

Do you believe Jesus has the power to pull you back out from behind closed doors into the world, which right now seems scary and threatening?

What hard thing are you facing in your life right now? Do you believe Jesus has the power to pull you through?

Invitation
What hared things is God asking you to do right now?  I invite you to pray about it.  Pray for the faith to trust that Jesus will pull you through.  And I invite you to share it with me so I can be praying for you too.