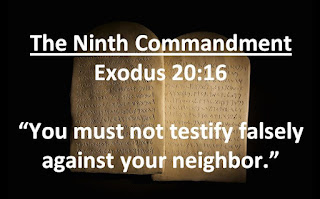 
Introduction
We only have two more commandments to look at in this series on the Ten Commandments.  I want to start today by giving you a little background on the list I challenged you to memorize.  The list of the Ten Commandments I've used in this blog for the past 9 weeks is a paraphrase I developed back in 2003 as part of a Christian martial arts program I taught.  At the beginning of each class, students would bow in, have a moment for silent prayer, and we would recite the Ten Commandments.  Each student was required to memorize the commandments as part of our curriculum.  Usually, my martial arts students would have the commandments memorized within a month.  In this way, I have probably helped hundreds of students memorize the Ten Commandments—even if they didn’t stick with the Karate class for more than a couple months.
The list I used is a paraphrase of the 10 Commandments found in Exodus 20:1-17.  I wanted my list to use simple language that was easy to understand and got straight to the point.  I struggled a bit with the Ninth Commandment and I didn’t really know why until this week when I studied it to prepare for this message.
Before we look at the 9th commandment, let’s recite the whole list together.  There are some blanks to fill in.  Let’s see how you are coming on memorizing the Ten Commandments.


Good!  Keep working on it until you have all 10 memorized.


Today we will look at the Ninth Commandment as found in Exodus 20:16
16 “You must not testify falsely against your neighbor.


As I said before, I struggled with how to word the ninth commandment in my list.  Here’s why.  I wanted to simplify the wording and just say, “You must not lie.”  But as I prayed about it, I felt the Lord was leading me to keep the words “testify falsely” instead of “lie.”  That phrasing is a little more awkward and complicated, but something told me it was there for a reason. 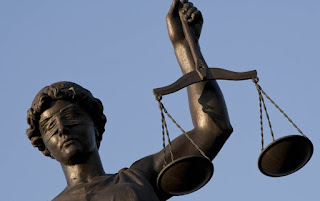 I know now why after studying for this message.  You see, the Ninth Commandment wasn’t originally concerned with ordinary, everyday types of lies.  The Ninth Commandment deals with the justice system of the community.  It’s about the court system.  That’s why it uses the term “testify.”  When a judge hears a legal case, he will call witnesses to testify.  Suppose someone has been accused of stealing.  The judge will ask if anyone saw the accused person steal or has any other information that will determine if the accused did or did not steal.  The integrity of the justice system depends on the honesty of the witnesses.  God wants His people to live in a just society.  For that to happen, the court system must be reliable.  For that to happen, witnesses must be honest.
Justice is sometimes personified and depicted as a person holding a set of scales and wearing a blindfold.  The scales represent weighing the evidence.  The blindfold represents objectivity; i.e. it doesn’t matter if the person is a friend or an enemy, rich or poor, a citizen or a foreigner; justice is blind so everyone is treated fairly and impartially.  Therefore, witnesses must not twist the truth to sway justice one way or another.


Institutional Lies
The language of the Ninth Commandment identifies it with the court system, but it applies to broader settings than that.  Remember, the Ten Commandments were written for the newly formed Israelite community after they left slavery in Egypt to teach them to live together as civilized people.  A civilized people must be able to trust their leaders to tell them the truth.
We have seen many instances throughout history where governments have lied to their people and led them astray.  Nazi Germany comes to mind as a particularly heinous example.  First, the government used propaganda to turn public opinion against the Jews--even convincing them that Jews were less than human and deserved whatever persecution and mistreatment the Germans dished out.  Near the end of WWII, as the Allies were closing in on Berlin, Hitler and his henchmen were still sending out propaganda saying they were winning the war even as their capital was crumbling around them.  They’re lies had turned into madness and a complete distortion of reality.
When leaders bear false witness, it erodes the bedrock on which society is founded.  We see the effects of this in our own nation.  Back in the 50s and 60s, most people trusted the government.  According to the Pew Research Center[1], public trust in the government was 74% under Lyndon Johnson in 1964.  But over the years as numerous scandals, lies, and coverups have come to light about leaders in various segments, the faith of the American people in their government has eroded.  In February of 2014, it was just 24%.  This is the effect falsehood has on society. 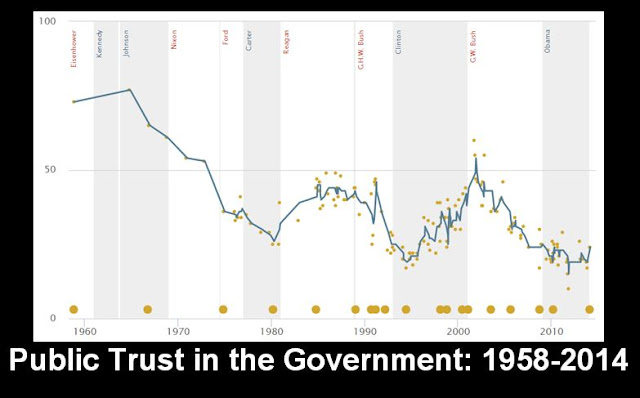 The Church is no exception either.  The year I was born, 1974, between 66-68% of Americans said they had great confidence in the Church.  Over the years, that number has gradually dropped to a low of 42% in 2015.[2]  As a 13 or 14 year old kid, I used to sometimes watch Jimmy Swaggart on the TV in the morning as I got ready for school.  Now this was unusual for me.  I wasn’t a very devoted Christian at that age, but something about Jimmy Swaggart grabbed my attention and I would watch.  I remember very vividly the footage of him crying and admitting he had “sinned against You, my Lord.”  It soon came out that he had been with a prostitute.  Such scandals make it hard for the public to trust the Church is telling the Truth. 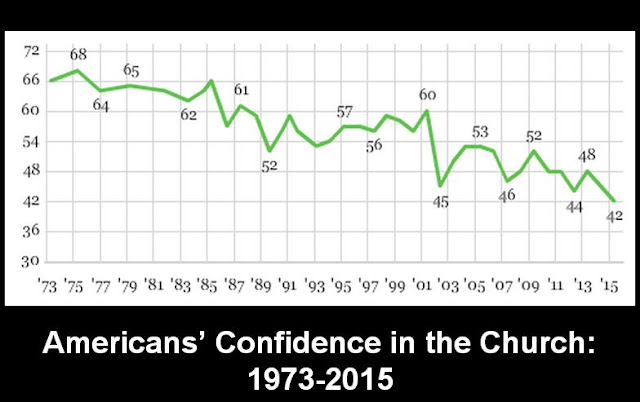 But it’s not just the scandals of televangelists or catholic priests that damage the influence of the church.  Every Christian is an ambassador for Christ.  You are an ambassador for Christ.  The reality is, there are people who look up to you as an example of what it means to be a Christian that will never look at me.  I may be a pastor, but you are the person they know and value.  Does your life and your actions tell the truth about Christ or bear a false witness? 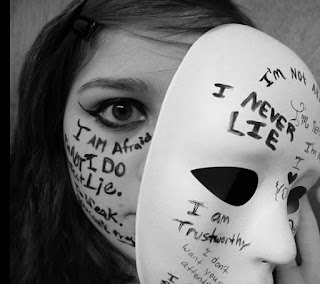 We can bare false witness in two ways as ordinary Christians.  First off, we could act in ungodly ways that do not set a good example for others.  But perhaps there is an even more sinister way we bear false witness with our actions.  It is when we pretend to be better than we are.  You see, no man is perfect.  We all have many, many flaws.  Just because we follow Jesus does not mean we do not make mistakes or have bad habits.  And yet, sometimes there is tremendous pressure within Christian social circles hide our flaws and weaknesses.  Looking around the church, one might think everyone is happy all the time.  All you see is smiling faces and most people keep their struggles and failings hidden.  We present ourselves as perfect (or nearly perfect).  But the reality is, the church is full of broken, fallen people.  We don’t have to be perfect; God accepts us as we are and just wants us to be honest about the good the bad and the ugly of our lives.  Anything less is to bear false witness and it erodes faith in the Church and hinders our own healing.


Jesus and Lying
Ephesians 4:25 says, “So stop telling lies. Let us tell our neighbors the truth, for we are all parts of the same body.”  We need to tell the truth--in both big and small things, and in our actions.  Christians should be known as the most honest people on the planet.
The people who lived in Jesus’ day struggled to know who they could trust.  The custom arose of using vows to guarantee a person was telling the truth.  So a person might say, “I swear upon my mother’s grave,” as a way of proving they spoke the truth.  In Matthew 5:34 and 37, Jesus said, “But I say, do not make any vows! Do not say, ‘By heaven!’ because heaven is God’s throne...”  “Just say a simple, ‘Yes, I will,’ or ‘No, I won’t.’ Anything beyond this is from the evil one.”
In his blog called “9 Sins the Church is OK With,” Frank Powell writes, “Here’s what Jesus is saying. You should live with such high integrity that your word doesn’t need attachments to make it legitimate... So, typical phrases like, “I promise,” “I swear,” and “I put it on my mom’s grave” shouldn’t be necessary.”[3]


Conclusion
Christians should be the most honest people on the planet.  And yet the honest truth is, we have all been a false witness at some point in word or deed.  James 2:10 says, “10 For the person who keeps all of the laws except one is as guilty as a person who has broken all of God’s laws.”  And one day, we will all stand before the Great Judge who will determine our fate.  The Ten Commandments testify against us that we have broken God's Law in many ways.
Romans 6:23 says “The consequences of sin is death, but the free gift of God is eternal life through Jesus Christ our Lord.”  Although we deserve death for our sin, God offers a pardon to all who trust in Christ’s death and resurrection.  For his death paid the penalty for our sin and his resurrection won the victory over death.  Like him, we too can be raised to new life--one free of sin and death--where we live at peace with God.
Would you like to take hold of this new life Jesus offers?  Then, pray to Jesus today and ask for forgiveness, ask him to save you, and decide to follow him from now on.