A Bible Paraphrase vs. Translation 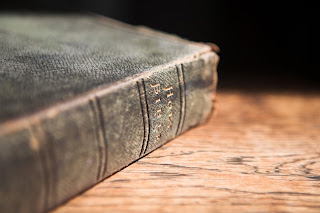 With a paraphrase, the author takes a translation of the Bible and puts it into his or her own words.  The author of a paraphrase usually does not start with the Bible in its original languages--Hebrew, Greek, and Aramaic.  It is more common for a paraphrase to come from an English translation that is rephrased into the author's own words.  A paraphrase does not do the more difficult and scholarly work of studying all the most ancient fragments, manuscripts, and copies of the Bible that exist in their original languages and translating the Bible into English.  Therefore, a paraphrase is not as accurate as a translation.  A paraphrase can be helpful in seeing the Scripture from a different perspective or shedding more light on a passage, but a paraphrase should never be relied on to replace or change the meaning of a passage.  A translation is just more accurate and reliable than a paraphrase in almost every way in almost every case.  Furthermore, the risk of a paraphrase is that it can introduce the author's own ideas, perspectives, theology, and bias into the Scripture.

A translation, on the other hand, is a far more accurate and reliable source than a paraphrase.  A good translation starts with the most ancient and accurate copies of the Bible available in the original languages and then carefully evaluate differences and translates them into English (or whatever language is desired).  Emphasis is on accurately translating the words and meanings of the original authors into English.  The struggle of the biblical translator is that words and phrases from ancient Hebrew, Greek, and Aramaic do not always translate directly into English.  For instance, Jesus and his father Joseph are called carpenters.  In the original Greek, Mark 6:3 calls Joseph a 'tekton'.  A tekton is a builder, usually of houses.  Most houses today are made of wood so it makes sense to translate 'tekton' as carpenter.  But in Jesus day, a builder of houses usually worked in stone or mud and there wasn't much wood around with which to work.  So maybe it might be better to say Jesus and Joseph were stone masons, but that doesn't really get it either.  And this is just one of the easy translation problems.  The work of translators can get really, really tricky. Add to this that other languages use words in different orders than the way we use them in English.  For example:
So, translators can't translate the Bible word for word from the original language to English or we wouldn't be able to understand it.  Translators have to strike a balance between making the translation as accurate as possible and as readable as possible.  Modern translations fall somewhere between two ideals.  There is the word for word translation, which tries to keep everything as literal as possible and sacrifices readability for accuracy. On the other end of the spectrum is a thought for thought translation, which tries to translate the thought or idea and sacrifices word accuracy for readability and to make the passage easier to understand.  Here are some examples of different translations of Proverbs 10:4. 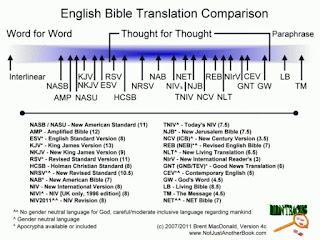 Interlinear Bible
(Hold on, this is a literal translation of the original Hebrew into English!  It's rough!)
"(Becomes) poor he who deals (with) a palm lazy; but hand the hard workers' makes rich."

New American Standard Bible (NASB)
(This is a dedicated word for word translation, but it's much better than a literal translation.)
"Poor is he who works with a negligent hand,
But the hand of the diligent makes rich."

New American Standard Version (NRSV)
(This one is about middle of the road between accuracy and readability.)
"A slack hand causes poverty,
but the hand of the diligent makes rich."

New Living Translation (NLT)
(This is one of my favorite thought for thought translations.  I find it very accurate and readable.)
"Lazy people are soon poor;
hard workers get rich."

A good example of how a paraphrase can alter the meaning of Scripture and/or introduce the paraphraser's own agenda's into the Scripture is found in a reading of Eugene Peterson's paraphrase of 1 Corinthians 6:9-10 in The Message.  He paraphrased the verses like this:  "Those who use and abuse each other, use and abuse sex, use and abuse the earth and everything in it, don’t qualify as citizens in God’s kingdom."  The NLT translated the Greek like this:  "Those who indulge in sexual sin, or who worship idols, or commit adultery, or are male prostitutes, or practice homosexuality, or are thieves, or greedy people, or drunkards, or are abusive, or cheat people—none of these will inherit the Kingdom of God."  The two sentences sound similar at first glance, but a closer looks shows Peterson cut out a lot, including: homosexuality, idolatry, greed, and intoxication.  And then Peterson added in a phrase that is not there at all, but sounds good to the modern ear that wants the Bible to be ecologically sensitive:  "use and abuse the earth."

The folks who translated the NLT guarded against introducing their own biases into the texts by using a team of 90 biblical scholars from various Christian backgrounds who collaborated on the translation.  Much care was taken to be loyal to what the original biblical texts said and avoid introducing anyone's personal political, theological, or denominational views.  That is much better than one man reading the Bible and putting it into his own words.  As much as I appreciate Eugene Peterson's The Message, it is only one man's thoughts about what the Bible says, not what the Bible actually says.

So, when reading a paraphrase--mine or anyone else's--keep in mind that it is not a translation.  Read it for what it's worth, but don't mistake it for more than it is.
Posted by Pastor Chris Mullis at 3:55:00 PM