Glory in the Heavens 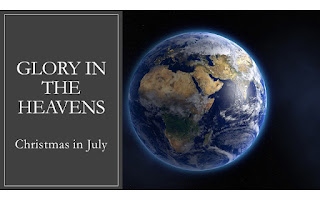 Introduction
When I think of July, I think of fireworks.  Most people probably don't think of Christmas in July.  But it's not a bad idea.  December is such a busy month and the holiday season is so commercialized; the true meaning of Christmas can get lost amidst all the hype and Christmas lights. So today, let's keep our thoughts firmly focused on the Christ Christmas celebrates.

Slides – Luke 2:6-15
6 While they were there, the time came for the baby to be born, 7 and she gave birth to her firstborn, a son. She wrapped him in cloths and placed him in a manger, because there was no guest room available for them.
8 And there were shepherds living out in the fields nearby, keeping watch over their flocks at night. 9 An angel of the Lord appeared to them, and the glory of the Lord shone around them, and they were terrified. 10 But the angel said to them, “Do not be afraid. I bring you good news that will cause great joy for all the people. 11 Today in the town of David a Savior has been born to you; he is the Messiah, the Lord. 12 This will be a sign to you: You will find a baby wrapped in cloths and lying in a manger.”
13 Suddenly a great company of the heavenly host appeared with the angel, praising God and saying,
14 “Glory to God in the highest heaven,
and on earth peace to those on whom his favor rests.”
15 When the angels had left them and gone into heaven, the shepherds said to one another, “Let’s go to Bethlehem and see this thing that has happened, which the Lord has told us about.” 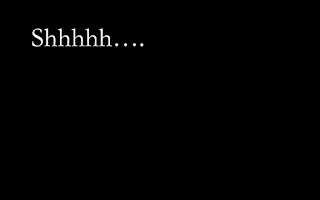 Pointing People to God
Listen to that...  Do you hear it?  Silence is never really silent, is it?  There's always some sound in the background.  People coughing and shuffling their feet; the sound of the air conditioner running.  I wonder what sounds the shepherds heard that night as they were watching their sheep in the dead of the night outside Bethlehem. A fire crackling or sheep noises.  You only hear those kinds of sounds if you're quiet and paying attention. And so it was for the shepherds that night in Bethlehem when an angel appeared among them.  It was quiet and they were listening for any sounds that seemed out of the ordinary--a wild animal or some other danger.  That made the approach of the angel all that more obvious as the glory of God shown around them.  They came to point people to Jesus.

Jesus came to point people to God.   For years, God had sent signs to point people to God, but they were always missed or ignored. We’re usually too busy or self-absorbed to notice; and so God came Himself in the person of Jesus.  God really didn't want us to miss Him this time.  So God also sent angels to point the shepherds to the baby Jesus lying in a manger in Bethlehem. 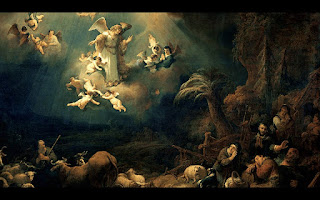 The Angels
The angels came to point people to Jesus.  I have never seen an angel, let alone a whole host of them as the Christmas story describes. Have you? I've heard stories of other who've seen angels.  And the Bible tells many stories of their appearance.  The book of Hebrews in the New Testament advises that we should always be kind to strangers, because you never know if it might be an angel in disguise.  I have never seen and angel (at least that I was aware of).  However, I have seen many other glorious wonders in Heaven that have pointed me toward Jesus and God.

Many people have seen fireworks blasting away in the sky this month.  Did you?  Do you remember the first time you saw fireworks?  I do.  What a glorious sight to see the colorful, sparkling lights fanning out like giant fiery hydrangeas in the sky!  To a young child, these are fascinating and captivating and beautiful.  As an adult, now more aware of the meaning of the Fourth of July as the celebration of our nation’s independence, the fireworks are even more magnificent because they represent to me how God set our nation free from the tyranny of Great Britain, against all odds.  And I can see God’s hand at work in the development of our nation as I remember how many have sacrificed throughout the years.

Lightning
But there is another light show in the sky that points me to God—lightening.  Many are afraid of thunderstorms.  I was too when I was a young child.  To help, my mom would take me out on our screened-in front porch and hold me while we watched the storm together.  It is one of my fondest early memories—sitting in my mother’s lap in a rocking chair and her soothing voice, feeling the hot summer air quickly cooled by the wet rain falling as a misty breeze filtered through the screens.  And up in the sky, you can see the lightning flicker across the clouds away in the distance, like fire flickering in a giant, Japanese lantern floating across the sky.  And the deep rolling of the thunder that speaks of a tremendous underlying power in this world.  How glorious!  If there is a Creator who made it all, how glorious and beautiful and powerful must He be. 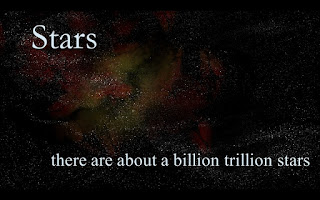 Stars
Do you ever go out at night, in the quiet, and just stare up at the stars?  I admit, I used to do it a lot more than I do now.  There is too much to distract me these days.  But as a child, we didn’t have air conditioning in our home and it was quite hot in the house by evening.  So, I often stayed outside in the summer for as long as I could.  And up in the sky you can see the same stars the shepherds saw in Bethlehem.  Throughout the ages, people have speculated as to what are these mysterious lights in the night sky.  Some have thought them to be gods or the spirits of their ancestors.  In modern times, science has shown they are giant balls of burning gas thousands of times a big as the earth and trillions of miles away.  The closest stars are around 4 light years away (i.e. it would take 4 years to get to them if you could travel at the speed of light).  The farthest stars are 5 billion light years away!  And there are about a billion trillion stars in the universe!  Some think science has disproved the existence of God.  But I look up at the glorious  stars in the heavens and see that God is more magnificent than we ever realized before! 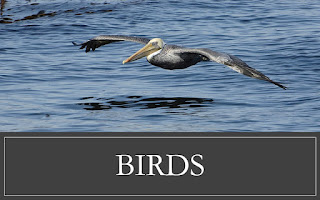 Birds
I see living things in the heavens that point me to God too.  For instance, what a glorious thing it is to see a flock of pelicans soaring across the waves over the ocean.  How graceful they are—flying in perfect formation, making minute adjustments to the wind, barely needing to flap their wings, spotting a school of fish swimming in the water below, and then circling around to dive at breakneck speed and splash into the water to catch their meal.  We sometimes refer to an unintelligent person as a “bird-brain”.  That's ironic because with all our human intelligence and ingenuity, we only figured out how to fly relatively recently.  And now that we’ve had a little over a hundred years to practice, we still don’t even come close to the grace and beauty of a bird in flight.  If God created the birds that soar above, He is truly magnificent indeed. 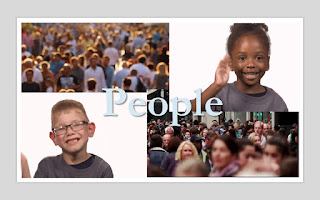 People
And yet, He created people too.  And look at us!  We are amazing!  Of all the creatures in God’s green earth, we are unique and special!  There is no other animal like us.  The closest, scientists say, are chimpanzees.  And, yes, they are amazing too.  But there is no animal who can talk like us, write words on paper (and now type on a computer screen).  There is no animal that has looked at a bird and dreamed of being able to fly and then figured out how to do it.  There is no animal who has looked up at the stars in the night sky and wanted to go there and then built a rocket-ship to fly to the moon.  Some say that humans acquired these abilities by chance.  I say that makes no sense; I say the hand of God must have been involved for people to be so incredibly different from all the other creatures on the planet and to have learned all that we have and gained mastery of all others animals. 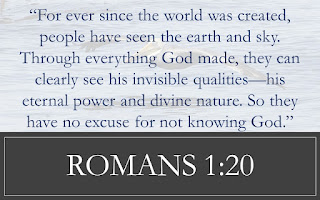 Romans 1:20 All these things—fireworks, lightning, stars birds, people (and many more) point me to God.  It is absolutely true what Romans 1:20 says, “For ever since the world was created, people have seen the earth and sky. Through everything God made, they can clearly see his invisible qualities—his eternal power and divine nature. So they have no excuse for not knowing God.”

If we just look around, the evidence it there.  The existence and nature of God should be obvious to anyone who is honestly searching for answers. 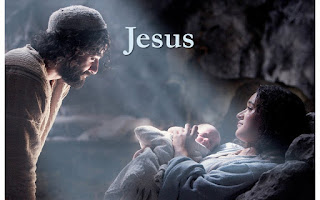 Jesus
But the glory of Christmas is that God didn't want to leave anything to chance.  Yes, we should know about God just by looking at all the glorious things He made.  But God wants to be absolutely sure you know Him.  And if you want a job done right, you do it yourself.  So God came Himself in the flesh.  Jesus is God.

Matthew 1:23 - “Look! The virgin will conceive a child!  She will give birth to a son, and they will call him Immanuel, which means ‘God is with us.’”
John 1:1 - "In the beginning the Word already existed.  The Word was with God, and the Word was God." [Jesus is the Word.]
Hebrews 1:3 - "The Son radiates God’s own glory and expresses the very character of God..."
Colossians 1:15 - "Christ is the visible image of the invisible God."

Jesus is God.  He was God when the whole world was created.  He designed the birds and the clouds, and lightning and thunder.  He flung the stars across the universe with a word.  And He created you and me.   And yet, mysteriously, Jesus is also human.  He was human in every aspect: born as a baby, had to learn how to walk, grew up in a village, went to school, dealt with bullies and chores and being hungry and hot in the summertime and cold in the winter.  He knew about the yearnings of an adolescent heart, that wants to find their one true love and get married.  But Jesus, God in human flesh, came to our world for a special purpose.  He came to show us what God is like, how God loves us beyond all measure.  We are God’s one true love.  And He was willing to die for us.  And He did die for us on the cross at Calvary.

When we look at Jesus, we see God--the most perfect representation and proof of God.  We see God’s incredible love—to leave the glory of heaven to come live in our broken world and ultimately to die for us on a cross, to pay the price of our sin.  And now everything that could be done to point you back to God has been done.  All that’s left is a choice—your choice.