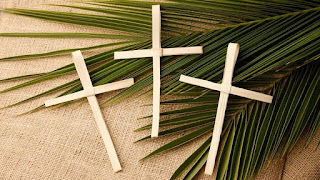 Palm Sunday is the day Christians have celebrated for nearly 2,000 years.  It is the Sunday before Easter and celebrates the day Jesus entered Jerusalem while the crowds cheered and waved palm branches.  We traditionally remember the occasion by inviting young children to wave palm branches as they process into the sanctuary.  During our social distancing isolation, we showed a video of the children holding homemade palm branches instead.  It was great to see their faces on our video screens, even though we would prefer to see them in person.

The people waving palm branches for Jesus that day didn't know it was "Palm Sunday".  They knew it as another traditional day.  you could call it "Lamb Selection Day."  Exodus 12:3  [On this day] “…each family must choose a lamb or a young goat for a sacrifice, one animal for each household.”  They were choosing the lamb they would roast for the Passover celebration.

Passover is the most important holiday/religious festival for Jews.  It recalls the day God used Moses to deliver the Hebrews from slavery in Egypt.  To deliver them, God sent several horrible plagues to torment the Egyptians.  The last and most terrible was the Angel of Death.  God warned the Israelites the Angel of Death would take the life of the firstborn child of every household unless they marked the doorpost with the blood of a lamb.  The Angel of Death would "pass over" every house marked by the blood of the lamb. In this way, God saved the lives of the Hebrews firstborn and convinced the Egyptians to let His chosen people go free.

Every year, the Jews commemorated their deliverance from slavery in Egypt with the Passover celebration.  And the day Jesus rode into Jerusalem, was they annual day everyone selected their lamb to be slaughtered for the Passover.  (A modern equivalent might be something like the day your family goes out to choose a Christmas tree for your home.)

It is no coincidence that Jesus entered Jerusalem to great fanfare on “Lamp Selection Day”.  Though the people did not know what they were doing at the time, Christians soon realized after Jesus rose from the grave that Jesus was the Lamb of God that was chosen as a sacrifice to cover all our sins.  I 1 Corinthians 5:7b, Paul wrote,  “Christ, our Passover Lamb, has been sacrificed for us.”  But let's review the Palm Sunday story. 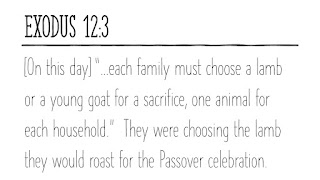 John 12:12-19
12 The next day, the news that Jesus was on the way to Jerusalem swept through the city. A large crowd of Passover visitors 13 took palm branches and went down the road to meet him. They shouted,
“Praise God!
Blessings on the one who comes in the name of the Lord!
Hail to the King of Israel!”
14 Jesus found a young donkey and rode on it, fulfilling the prophecy that said:
15 “Don’t be afraid, people of Jerusalem.
Look, your King is coming,
riding on a donkey’s colt.”
16 His disciples didn’t understand at the time that this was a fulfillment of prophecy. But after Jesus entered into his glory, they remembered what had happened and realized that these things had been written about him.
17 Many in the crowd had seen Jesus call Lazarus from the tomb, raising him from the dead, and they were telling others about it. 18 That was the reason so many went out to meet him—because they had heard about this miraculous sign. 19 Then the Pharisees said to each other, “There’s nothing we can do. Look, everyone has gone after him!”

Palms and Hands
Today is Palm Sunday. Obviously, palms refers to the palm branches the people waved as they praised God and hailed Jesus as the King of Israel. However, the story has me thinking about a different kind of palm that is so important—the palms on our hands. During the COVID 19 epidemic, we know how important hands are. We've been told to ash your hands. Don’t touch our faces or other people. The other day, I delivered something to a church members house wnd their young daughter, Jazmin, came running up wanting a hug. It broke my heart to turn her away saying, "It's not safe to hug right now."

While we've been told not to touch each other with our hands, others must do just that because their hands are deemed essential. Think about doctors, nurses, and healthcare workers. They must use their hands to care for and bring healing to others. First responders are the first ones on the scene when there is an accident or emergency and they must use their hands, regardless of the danger.  And what about the person behind the counter at the grocery store using her hands to ring up your essential groceries or the truck driver using skillful hands to drive the truck delivering supplies to the store.  My daughter works for Taco Bell and uses her hands to pass food through the drive through window to people who need food.  And some jobs that require good hands are not very glamorous, but just as essential--like people collected and disposing of garbage (absolutely essential if we want to stay clean and safe and sanitary).

It all depends on the set of hands. A basketball in my hands is worth about $19.  A basketball in Michael Jordan's hands is worth about $33 million. Two fish and five loaves of bread in my hands is a couple of fish sandwiches.  Two fish and five loaves of bread in Jesus'hands will feed thousands.  It depends whose hands are holding it.  Put some nails in my hands and I might build a birdhouse.  Put some nails in Jesus Christ's hands and it saves the entire world.  You see, it depends on whose hands you have.   Who holds the world in His hands?  Whose hands are holding you? 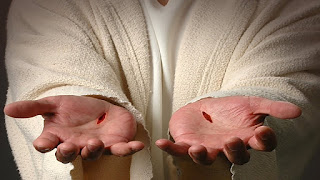 I want to tell you a little about Jesus' hands. Jesus' hands were carpenter’s hands. Just an ordinary man. I bet they sometimes were dry and rough (like mine are right now because I've been washing them so much). Jesus was flesh and blood like you and me. He built ordinary things with his hands--houses, furniture. Did he ever mash his thumb with a hammer and bleed?

And yet, this ordinary man's ordinary hands also laid the foundations of the world.  As John 1:1-3 says, “In the beginning the Word [who is Jesus] already existed. The Word was with God, and the Word was God. He existed in the beginning with God. God created everything through him, and nothing was created except through him.”  Jesus was a man, but He was also God. He created the world and everything we see. His hands were the hands of God.

Jesus hands were also a healer’s hands.  With his caring hands, he scooped up dirt from the ground and mixed it with his own spit and smeared the mud on a man's eyes to heal him.  The the man had been blind from birth, Jesus' hands made him see!  And Jesus used his healing hands to take another man by the hand, a man who was lame and could not walk, and Jesus lifted him to his feet and he could walk!  And Jesus also used his hand to touch people who were considered untouchable because they had leprosy, which was a contagious disease.  And Jesus touched them with the palms of his hands and they were made clean and healthy and whole!  Jesus hands were healing hands.

And Jesus hands are a Savior’s hands.  Reaching down from heaven into our broken world, Jesus takes hold of us and lifts us out of the miry clay of sin and puts our feet safely on the solid rock again.  Jesus rescues us from all those situations that threaten to destroy us or keep us from being all we were meant to be.

Jesus' hands are nail scared hands, for they were pierced to pay the price for our sins.  On the cross, they were pierced and bled for us that we could be forgive and made clean and restored to a right relationship with God.  Speaking of this hundreds of years before it happened, Isaiah prophesied, “See, I have written your name on the palms of my hands.” (Isaiah 49:16)  When we look at the palms of Jesus hands, we see nail scars.  When Jesus looks at his palms, he sees you name.

Invitation
Today is Palm Sunday/Lamb Selection Sunday.  As we prepare for Easter, who will you select as your Lamb.  I pray you will select Jesus Christ.  For He is the only Lamb that is worthy.  He is the Lamb of God who takes away the sin of the world.  Won't you select Jesus as your Lamb today?

If Jesus is your choice, I would invite you to symbolize this by tying a red ribbon on your door, your mailbox, you porch railing.  The red ribbon symbolizes the power of the blood of Jesus.  Just as the Israelites originally put blood of a lamb on their door post so the Angel of Death would "pass over" their house and leave them unharmed, we put the blood of Christ over our life so the Angel of Death passes over us and we receive eternal life through Christ, the Lamb of God.
Take a picture of your red ribbon.  Post it on your Facebook page (share it with me too).  This is a witness to everyone that you trust in the power of Jesus' blood.  You have faith in Jesus & trust that He’s still in control and has the master plan during this worldly chaos.

For more information, join one or both of these Facebook groups: